Review: Harry 20 on the High Rock 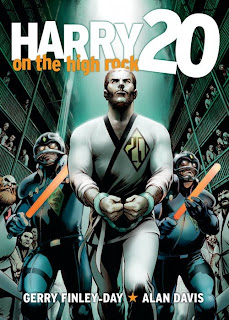 Harry 20 on the High Rock is the first full story arc I’ve ever read from 2000 AD, a black-and-white British anthology comic which has been published weekly since the 1970s. While not as popular in the United States as it is in the UK, the comic has nonetheless produced internationally recognizable characters (like Judge Dredd) and has served as a launchpad for a number of prominent comics creators, including Alan Moore, Peter Milligan, Garth Ennis, and Grant Morrison, to name just a few.

There’s no overarching plot in 2000 AD; rather, each issue is comprised of a few five- and six-page stories, each of which is usually a part of some longer narrative that unfolds over several weeks, months, or even years. And while I picked Harry 20 as my starting point, it’s possible to dive in virtually anywhere. Approaching the comic for the first time, though, I was skeptical of just how good such a heavily segmented story could be. Would half the comic be spent recapping earlier plot points? And what exactly can a writer accomplish in just five pages, anyway? These were the questions I had as I began to read Harry 20 on the High Rock.

Luckily, I had nothing to fear. In fact, the short length of each chapter is actually one of the book’s greatest assets. Aware of what limited space he has, writer Gerry Finley-Day doesn’t waste a single panel, propelling the story forward at incredible speed even as he develops the central characters with surprising finesse. But I’m getting ahead of myself – I haven’t even explained the premise of the story yet. (I’ll just chalk that up as a side effect of the book’s breakneck pace!) 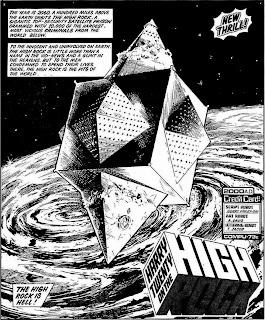 Harry 20 on the High Rock takes place in a future where the worst criminals are jailed not on Earth, but on an orbiting satellite known as the High Rock. And, as we learn on the first page: “The High Rock is Hell!” Tormented by sadistic guards and stripped of their surnames (which are replaced by numbers, reflecting the number of years each man is to be imprisoned), the High Rock is not at all a happy place for its prisoners. It’s also where our protagonist, Harry Thompson, is sent at the beginning of the book to serve twenty years for a crime he didn’t commit. His one goal, from the moment he arrives? Escape!

It won’t be easy, however, and Harry wastes little time in gaining the trust and help of his cellmates: Genghis Eighteen, a Mongolian imprisoned for refusing to sell his family’s land to the military, and Ben Ninety, an apparently crazy old man who may very well have been on the High Rock since it was built. Incorporating the best elements of all the greatest prison films and TV shows – camaraderie between those wronged by the system, rivalries with other inmates, a cadre of inhumanly evil guards led by a maniacal warden, and a truly wild escape plan – Finley-Day crafts a suspenseful, unpredictable story that also happens to be paced perfectly. 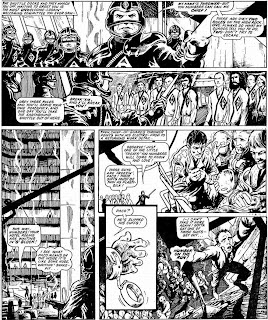 Not really knowing what to expect of Finley-Day’s writing before I began reading, though, the main draw of this book for me at the outset was that it features the earliest professional comics artwork by one of my favorite artists, Alan Davis. Since it comes from such an early point in his career, I had expected the art to be a little rough. But remarkably enough, Davis is at top form in these pages. Most impressively, it’s obvious that he put a great deal of work into the design of the High Rock itself. In fact, schematics that appear throughout the story show that Davis actually mapped out the entire prison from top to bottom, inside and out. The effect is that when the prisoners despair that there’s no way to escape the High Rock, it’s not a mere plot contrivance; instead, it’s the visual nature of the place Davis has created that makes us believe in the hopelessness of Harry’s situation.

As much as it may sound like an overstatement, I feel quite confident in saying that Harry 20 on the High Rock is one of the best self-contained comic book stories I’ve ever read. The story and the artwork are perfect individually, and put together, they make for something truly awe-inspiring. If this book is at all representative of the quality of the rest of 2000 AD, I can’t wait to read more. Consider me converted!