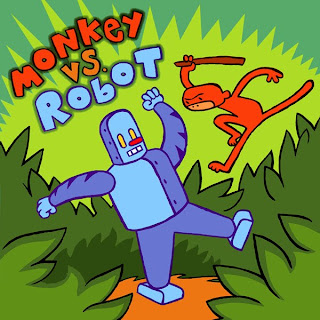 I’m not actually sure how or where I first heard of James Kochalka. It may have been from a short guest-penciling job he did in Ultimate Marvel Team-Up, which was one of my favorite comic books about ten years ago. It may also have been from his four-page cartoon “Hulk vs. the Rain,” which appeared in an Incredible Hulk Annual around the same time. Either way, I’m fairly confident that my first exposure to his work was in some sort of superheroic venue, which is ironic considering Kochalka is one of the most well-regarded voices in the medium for reasons completely unrelated to mainstream comics. At the time, I had little idea that there were comics worth reading outside the worlds of Marvel and DC, so his unique style caught me off guard – in the best of ways.

I’m not sure Kochalka was the specific “gateway drug,” so to speak, that led me to first explore comics written and published outside the mainstream, but reading his work was certainly a stepping stone in that direction for me. So it was with a bit of a guilty conscience a few days ago that I realized I couldn’t remember the last time I had read one of his books. It was only fitting that I go back to the beginning, I thought, and read one of his early graphic novels, Monkey vs. Robot.

The book is exactly what the title suggests: monkeys fighting robots. But it’s also much more than that. There are several different subtexts at play here, the most potent one being a condemnation of technology’s effect on the natural world. You see, the robots have set up a factory smack in the middle of the jungle, and the toxic sludge it produces is killing the monkeys. You can imagine why they might be a little upset.

The environmental theme pervades every aspect of the book, especially the monochromatic art (I hesitate to call it black and white, because the brushstrokes look more to me like a deep, dark jungle green). Of course, that’s out of necessity for the most part, since there are very few words in Monkey vs. Robot, aside from the occasional sound effect. The robots have a few lines (“Attack,” “Begin extermination,” etc.), but they really only serve to deepen their total lack of emotion. Their faces are fraught with metallic indifference, even in death – that is, if it’s possible for a nonliving thing to actually “die” – while the monkeys exude fear, anger, and hope without so much as a word.

The story works on another level too, one that I completely missed on my first read-through. Toward the end, one of the monkeys escapes into the robots’ factory and comes face to face with “the Mother,” a terrifyingly inhuman master computer of sorts that rants almost incoherently about “crystalline perfection” and “metal futurity.” The monkey stands transfixed for several pages, and the spell is only broken when he is discovered and mercilessly attacked by one of the robots.

For one brief moment, though, both the monkey and the reader are seduced by the apparent beauty of the Mother’s words. Then, in an instant of utter horror, Kochalka demonstrates the ease with which seemingly benign words like “progress” and “future” can also be synonyms for “death” and “extinction” – with the Mother’s message rejected by reader and monkey alike, the factory and the jungle both erupt into flame.

Even if Monkey vs. Robot lacks strong individual characters in the vein of some of Kochalka’s later work, the emotions it invokes are just as powerful. Reading this book, I felt despair as the final battle turned hopelessly against the monkeys, fear at the sight of fire burning uncontrollably against the night sky, and finally, joy at the cleansing, hopeful rain that brings the story to an end. In a word, this book made me feel, and if there is any higher praise I can give it than that, my only regret is that I can’t find the words to express it. On the other hand, though, as Kochalka so beautifully reveals in this book, perhaps words aren’t the answer to all our problems.