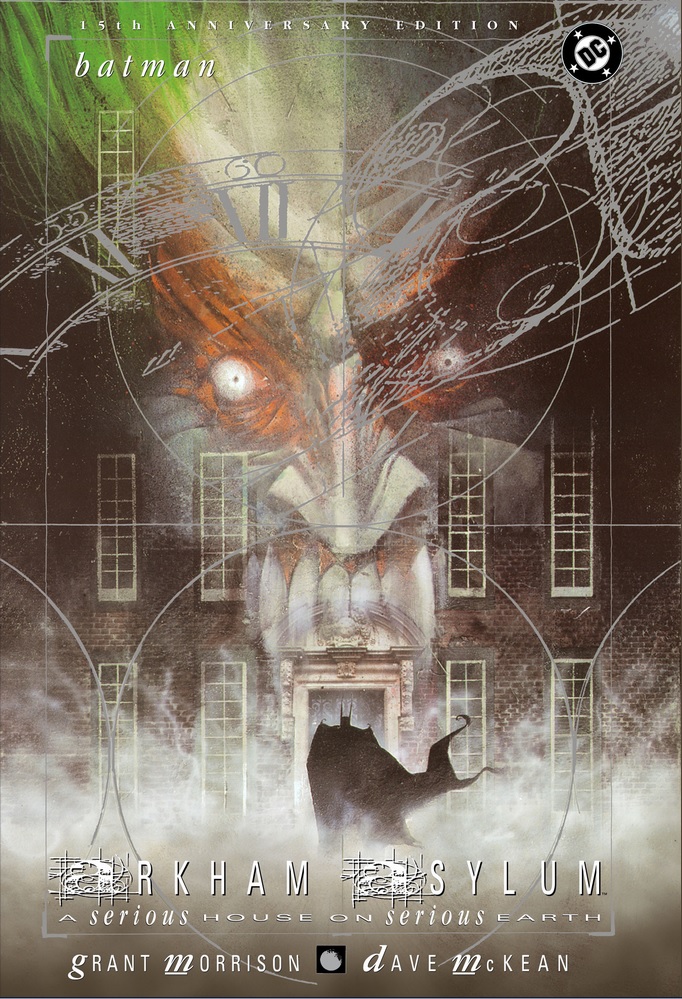 The subtitle of Grant Morrison and Dave McKean’s Arkham Asylum: A Serious House on Serious Earth is quoted from the English poet Philip Larkin: “A serious house on serious earth it is, / In whose blent air all our compulsions meet, / Are recognized, and robed as destinies.” Larkin was writing about churches – serious places where serious questions might be asked about man’s place in the universe – and the reference seems fitting for a tale so rife with religious imagery and which outwardly appears to interrogate the nature of its hero’s existence.

The subtitle also suggests Arkham Asylum’s conscious opposition to what DC had in years past called “Imaginary Stories.” Throughout the 1960s and 1970s, such stories were typically one-off tales about possible realities (such as one comic in which Superman revealed his secret identity to and subsequently married Lois Lane), stories that would have no bearing on the ongoing continuity of the DC universe. By contrast, the supposedly “serious” Arkham Asylum fashions itself, as it does its version of the Joker, as “super-sane” – that is, as a serious, sober reflection of what the Joker’s psychotherapist calls “the world as a theatre of the absurd.”

In selecting Batman as the book’s hero, however, Morrison attempts a narrative sleight of hand. The introduction via flashbacks of Amadeus Arkham – founder of the asylum where Batman’s most disturbed (and most disturbing) nemeses are interred – is yet another red herring, distracting readers from the realization that Morrison’s tale is far from some universal parable about the nature of madness; nor is it an attempt to plumb the depths of the everyman’s soul. Indeed, Arkham Asylum evinces not so much the monomythic Hero’s Journey as it does a highly specific character assassination of what Morrison would later call “the ’80s interpretation of Batman as violent, driven and borderline psychopathic.” 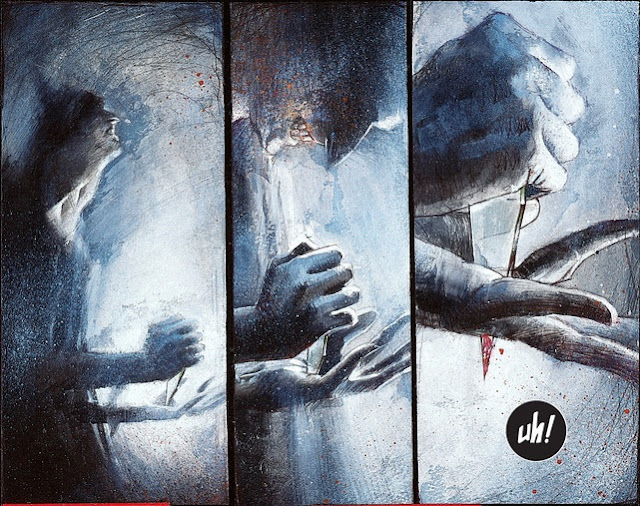 Morrison’s outright contempt for the 1980s version of Batman is just one of many fascinating insights yielded by the annotated script included with the book’s 15th Anniversary Edition. The script goes a long way toward explaining some of Arkham Asylum’s more bewildering moments, among them Batman’s bizarre reaction to the Joker pinching his butt (“Filthy degenerate!,” Batman screams rather than simply punching him in the face) and an odd reference to the Joker wearing heels despite appearing in totally conventional attire. As it turns out, Morrison originally intended for the Joker to appear dressed as the singer Madonna, “in a black basque, seamed tights and lace-up stilettos.” In this early version of the story the Joker “projects an absolute confidence that confers upon him a bizarre kind of attractiveness and sexuality,” which throws into sharp relief Batman’s lack of sexual maturity. Of Batman, Morrison writes:

But if Morrison’s goal is to recuperate Batman from a sexually impotent failure and into a Christ figure capable of “physically demonstrating his new-found dominance” (as Morrison writes at the script’s conclusion), then he does so to often uncomfortable effect.

The Joker’s previously mentioned feminization – in combination with Arkham Asylum’s most disturbed male characters all donning dresses by the end, and with the text’s frequent allusions to the murderer Norman Bates’s transvestism in Alfred Hitchcock’s Psycho – constantly threatens to push the story into the realm of transphobia. Morrison adds notes of homophobia to the list of concerns as well, as in the script’s description of the villain Clayface: “an avatar of filth and corruption, the personification of pestilence and infection, whose impure touch carries instant contagion. Alert readers will perceive him as AIDS on two legs.” Batman proceeds to brutally break those legs in response to Clayface’s expressed desire to “share my disease.” 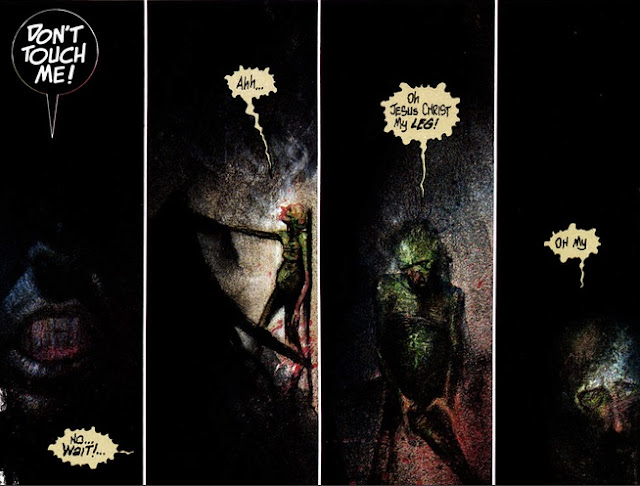 Dave McKean’s artwork, all the while, is an abstract phantasmagoria of squalor and darkness. He eschews the realism of Morrison’s script in favor of more impressionistic renderings that suggest the characters’ feelings by way of their shadowy environments rather than through conventional framing, composition, or coloring. His artwork functions as yet another narrative sleight of hand, in that it papers over some of the more embarrassingly self-important moments of Morrison’s script. For example:

The recurring Fish motif – which relates to Pisces, the astrological attribution of the Moon card – also relates to Christ, who in turn can be linked to the Egyptian God Osiris, whose life and descent into the underworld parallels with the story of Amadeus Arkham. We also see later that the Asylum is built upon a Vescica Piscis – this symbol . . . forms the ground plan of much religious architecture and is used in the construction of most of the major buildings of antiquity, like Stonehenge and Avebury in England. It is a development of the Greek symbol for Christ.

Morrison supplements such totalizing descriptions with, among other things, Freudian childhood anecdotes and lengthy quotations from Aleister Crowley. Captured here is a young Morrison at perhaps the most hubristic point of his career; in short, he writes, “everything in this story reflects and comments upon everything else.”

Conceived in the immediate aftermath of Watchmen and The Dark Knight Returns, Arkham Asylum represents an extreme response to the grimdark aesthetic pioneered by those comics: one that ironically adopts that aesthetic in order to repudiate it. But whereas later responses to Watchmen (like DC’s recent DC Universe: Rebirth) would attempt to rise above the pervasive darkness of that comic with more uncomplicated tales of good’s triumph over evil, Morrison and McKean’s tale is arguably the victim of its own attempted seriousness. Weighed down by its more problematic themes and the pretension of its young writer, Arkham Asylum is simply, ultimately trapped in a quagmire of its own making: one of inescapable darkness, madness, violence, and death.
Posted by Marc at 12:15 PM