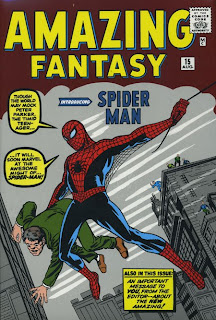 Writing about this collection of Spider-Man’s earliest appearances is the best way I can think of to start a blog about graphic novels and collected editions because, in a way, the final issue of Amazing Fantasy is an origin story for Spider-Man and for myself. While only one of us gained superpowers from the bite of a radioactive spider, the issue did serve as an introduction to the comic book world for us both. Just as Spider-Man made his first appearance in Amazing Fantasy #15, my first experience with comic books was reading early Spider-Man comics in hardcover Marvel Masterworks collections I found at the library. At the time, I was already enthralled by the character by way of the (then-current) animated series, and the original Lee/Ditko comics captured my imagination in a way that excited me just as much, if not even more.

What has always distinguished Spider-Man from other superheroes for me, especially in his first appearances, is how relatable he is. He has problems at work and school, and he struggles to maintain healthy relationships with his friends and family. He has a real life, one that’s often more important and more interesting than his life as a crime-fighter. That’s what made him stand out to me when I read his stories as a child, and it’s why, despite a huge expansion in my comic book interests since then, he’s still my favorite comic book character today. And it’s why I titled this blog after the character’s personal mantra: “With great power…there must come great responsibility!”

I think it’s certainly safe to say that The Amazing Spider-Man Omnibus, Vol. 1 captures this spirit more fully than any other collection ever published. Weighing in at nearly 8 pounds and over 1000 pages, the book’s massive size is befitting of the character’s long, rich history. I often describe the Omnibus to friends as my “desert island” book – the one volume which, in the hypothetical event that I were to be stranded on a desert island with only one book, I would choose to take with me. (Not only would I be entertained for hours on end, but I imagine the book would be a very effective instrument for clubbing small to moderate-sized animals over the head.)

There are some truly wonderful stories in this collection for Spider-Man fans new and old. Some of my favorites include the first appearances of J. Jonah Jameson and the Daily Bugle staff, Peter Parker’s high school graduation, and Spider-Man’s attempt to join the Fantastic Four – by force! Most of the character’s well-known rogues gets their start here as well, with Dr. Octopus, Green Goblin, Kraven the Hunter, Electro, Mysterio, the Lizard, and more all putting in appearances. In one of the book’s most memorable stories (originally printed in Amazing Spider-Man Annual #1), several of them combine their efforts to take down Spider-Man by joining forces as the Sinister Six. With a massive, double-length story and a number of stunning splash pages sprinkled throughout, the story is one of the high points of the Lee/Ditko partnership.

Their collaboration reaches its peak, in my opinion, in the “Master Planner” story from Amazing Spider-Man #31-33. In one of the most famous sequences in superhero comics, Spider-Man saves himself from being crushed and drowned by lifting several tons of metal off his back, silently contemplating his friends and family throughout his efforts. His life, in essence, flashes before his eyes. It's a perilous situation that could have been resolved quickly and easily by Lee and Ditko, but instead it becomes a half-issue, pathos-infused character study that serves to remind us of what makes Spider-Man such a wonderful character in the first place.

Not every single issue is a knockout, but the truth is that there’s rarely a dud to be found here – there are only a few toward the end, when Ditko is clearly beginning to lose some of his steam. (Ditko would be replaced by John Romita with Amazing #39, and the Omnibus collects every issue up to that point.) Spider-Man was one of Stan’s favorite characters to write, and it shows on nearly every page. Even the really goofy stories, like Spider-Man’s fight with the “Living Brain,” a robot terrorizing Midtown High School, never fail to bring a smile to my face even if they’re not quite the pinnacle of comic book storytelling.

One of the biggest draws of this book is that all 40-plus issues are collected as they were originally published. That means, among other things, the reprinting of original letters pages for the first time, many of which contain letters from future comic book creators. There are a few places, admittedly, where the color restoration is a bit obvious, but unlike some other reprints (in particular, the notorious Barnes and Noble volumes published several years ago), the colors haven’t actually been changed from what they were originally. The oversized pages bring Ditko’s artwork to life in a way that’s bigger and bolder than any other collection published to date, and a number of cover galleries, unused pencils, and essays by Stan Lee and others help to round out the volume as a whole.

For people who grew up reading Spider-Man comics, The Amazing Spider-Man Omnibus is a great way to relive those memories in one convenient place – memories well worth re-exploring because, unlike so many other things that captured our imaginations as children, Spider-Man actually withstands the test of time. If, on the other hand, you’ve never read the original Spider-Man comics before, this book is a good place to start. If you’re wary of taking the hundred-dollar plunge demanded by this particular collection (less on Amazon and other online retailers), there’s no reason to pass these comics up – the same material has been collected more inexpensively elsewhere, although in at least one case (the Essential Spider-Man series) at the expense of color. The best alternative is probably the Marvel Masterworks series I mentioned at the beginning of this review, which is finally seeing some very nice softcover reprints. The Omnibus is still the way to go, in my opinion, for its oversized pages and extra content, but you really can’t go wrong either way. These stories are the reason I started reading comics and they’ll always mean something special to me, no matter what format Marvel decides to collect them in.

Welcome to the first post on With Great Power, where I'll be posting weekly reviews of graphic novels and/or collected editions!

There are a few reasons why I wanted to start this blog. While I've wanted to blog about comic books for a long time, there are a lot of great websites out there about comics already. Relatively few, however, are dedicated solely to collected editions (trade paperbacks, hardcover collections, etc.). Since the only way I read comics these days is in collected form, I thought this seemed like the perfect angle for me to take.

My aim with this blog is to post at least one review a week, along with occasional posts about other happenings in the world of comics and collected editions. As much as I'd like to be able to post every single day, I know from past blogging experiences that maintaining a website like this is always a bit more time-consuming than it seems at first, and that "real life" tends to get in the way more often than expected. So while I'll probably be taking it a bit slow for right now, I'll do my best to post as often as I can without making any compromises in terms of the quality of each post.

Before I get on with the first review, I should add that when I say there are "relatively few" collected edition blogs on the web, what I really mean is that there aren't that many at all...by my count well under a dozen, in fact. All of these are fantastic, top-notch efforts, and I enjoy every podcast and review they post. I hope that my voice will be a positive contribution to the community they've started, and that its numbers will continue to grow as time goes on.

So with all of that said, I'll cease my rambling and get on with what you're really here to see...the first review! Comments are always encouraged, and I promise to do my best to respond whenever I can. Thanks for reading!