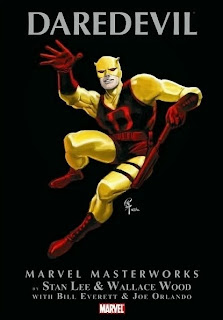 A lot changed at Marvel Comics in the first half of the 1960s. At the beginning of the decade, the company was still mostly publishing science fiction, horror, war, and romance comics in the incredibly tame post-Comics Code vein. In 1961 Stan Lee and Jack Kirby debuted the Fantastic Four, and within three years, Lee and his various collaborators’ new creations were selling comics in numbers unseen for decades. Daredevil, who premiered in 1964, was among the last of Stan Lee’s major Silver Age co-creations. And yet, at many points in Marvel Masterworks: Daredevil, Vol. 1 – which collects the character’s first eleven appearances – the series feels like it could just as well have been among the first.

Some aspects of the character’s early issues feel downright proto-Marvel. The first issue, in which teenager Matt Murdock’s other senses are enhanced after a chemical accident leaves him blind, reads like a 1950s Jack Kirby crime comic. Matt’s childhood may be the sedentary one of a boy committed to his studies (his father wants him to “become a lawyer, or a doctor” – anything other than a prizefighter, like him), but the outside world we glimpse every so often is one populated by boy gangs, petty thugs, and organized crime – the same trappings that adorned so many of Kirby’s comics throughout the 1940s and ’50s.

How strange it is, then, that Kirby’s name appears not once in this collection; oddly, Daredevil was one of the few early Marvel characters he was never associated with. (A caveat: Mark Evanier has recently asserted that Kirby designed Daredevil’s original costume, but this remains unverified.) Instead, the artists here include Bill Everett, whose work had been appearing in Marvel publications since the company’s first comic book in 1939, and former EC artists Joe Orlando and Wally Wood – two comics veterans with styles uniquely their own. This is pretty remarkable for a Marvel comic published in 1964, since by this point the majority of the company’s output was drawn either by Kirby or, as in the cases of Sol Brodsky and the early Gil Kane, by a close imitator of Kirby’s style. (The major exception, of course, was Steve Ditko, but he rarely strayed from the pages of Dr. Strange and Amazing Spider-Man in these days.) The result is a comic that often looks as though it could have been published in the 1950s.

Art aside, the plots themselves often hearken to the conventions of the previous decade’s most popular genres. While other Marvel series of the mid- ’60s pitted their heroes against alien invaders, roguish demigods, and planet-devouring cosmic entities, Daredevil’s nemeses were run-of-the-mill thugs who, when struck by what little ingenuity they possessed, donned garish costumes to commit largely bloodless crimes. There is one notable exception in this volume: Daredevil #7, illustrated by Wood and often considered amongst the best of Lee’s writing. (It was even included in the anthology Marvel Visionaries: Stan Lee, a book I reviewed some years ago.) This issue implements what would become the signature plot formula of Silver Age Marvel comics – the superhero crossover battle – but here the guest-star, Namor the Sub-Mariner, is such an outlandish inclusion, and the story ends in such definitive stalemate (Lee was adamant that no character should ever achieve complete victory over another in these battles), that it stands as one of the formula’s great exemplars.

While Daredevil’s earliest issues may feel a bit anachronistic when compared to the likes of mid-’60s Fantastic Four and Amazing Spider-Man, the series is no less interesting for it. If anything, its reiteration of some of the previous decade’s most popular themes and iconography – the latter enhanced, no doubt, by the presence of ’50s mainstays like Everett, Wood, and Orlando – may actually complicate our understanding of comics’ Silver Age: for as much as the work of contemporary writers may evince nostalgia for this period, Daredevil is concrete proof that the 1960s were an age just as invested in the history of the medium.
Posted by Marc at 3:30 PM 3 comments: