Review: Roots of the Swamp Thing 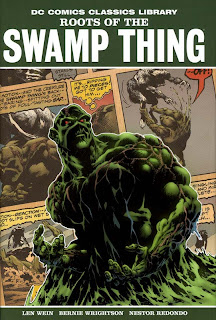 Most discussions about Swamp Thing revolve around Alan Moore’s influential tenure on the title during the 1980s, but comparatively little has been said about the character’s first appearances, published over a decade earlier. And while the early-’70s comics collected in Roots of the Swamp Thing, written by Len Wein and illustrated primarily by Bernie Wrightson, don’t have the same philosophical heft as some of Moore’s stories, they frequently make for a kind of genre entertainment which, in its own way, is just as fulfilling. In fact, if Moore’s creative run was paradigmatic of the more literary-minded approach mainstream comics were to briefly take in the late 1980s, I would argue that Wein’s run was similarly emblematic of the best that horror comics were capable of in the 1970s.

It’s probably fitting, then, that the first Wein/Wrightson story to feature a swamp monster was published in House of Secrets, one of DC’s two flagship horror anthology titles during the 1970s (the other being House of Mystery). Between its second-person narration and moody linework and coloring, this story wears its debt to 1950s EC horror on its sleeve; it’s a worthy homage, with an ending as powerful as that of any story illustrated by the likes of Al Feldstein or Johnny Craig. Interestingly, though, this story was merely the prototype for what was to come in the ongoing series Wein and Wrightson would begin the following year.

In Swamp Thing #1, the duo reinvents their title character as Alec Holland, a scientist whose “bio-restorative formula” possesses the ability to “make forests out of deserts.” His discovery is naturally the envy of villains like the mysterious Mr. E, whose agents sabotage Holland’s lab and murder his wife. Holland survives, but he is forever changed: saturated with his own formula and set ablaze, he plunges himself into the heavily-vegetated swampland surrounding his home and mutates into the “muck-encrusted mockery of a man” that will come to be known as the Swamp Thing.

Holland proves a remarkably affecting character for a shambling monster virtually incapable of speech. Wein rarely loses sight of the character’s sorrow over the death of his wife, and while the book’s third-person narration is often heavy-handed to the point of campiness, the writing that conveys Holland’s thoughts is soberingly down-to-earth. But while the character at times seems well on his way to full-blown existentialism, his development is repeatedly cut short by the introduction of too many villains, too early in the series (in fact, there is already another one, in addition to Mr. E, by the end of the first issue). The worst of them is the Cthulhu-esque monster M’Nagalah, which spends half an issue babbling about its role in the evolution of mankind. At one point it claims to have “touched the minds of your greatest scribes,” who it lists as H.P. Lovecraft, Ambrose Bierce, and Edgar Allan Poe; what is the 1970s equivalent of a facepalm?

The story is at its best, however, in the issues detailing Holland’s search for answers about Mr. E. His hunt takes him from Louisiana all the way to Eastern Europe, and in stories equal parts gothic and Universal Studios horror, Wein pits the character against werewolves, the mad scientist Anton Arcane, and even a contemporary version of Frankenstein’s monster. At the same time, he develops a supporting cast consisting of Matthew Cable – a government agent convinced Swamp Thing is the murderer of Holland and his wife – and Arcane’s beautiful, white-haired daughter Abigail, who joins Cable in his dogged pursuit of the mutated Holland. The journey ends in Gotham City, where Holland’s run-in with Batman makes for a tale as clever and engaging as the best issues of Marvel Team-Up and The Brave and the Bold. This issue also brings the Mr. E subplot to a satisfying close, seemingly setting the stage for Wein and Wrightson to take the character in any number of new directions.

Instead, unfortunately, the quality of the book nosedives almost immediately. It’s around this point that the page count for each issue drops from 24 pages to a mere 20, and while the stories are more compressed from here on out, that doesn’t necessarily make the plotting any tighter. It’s not long before certain tropes rear their increasingly ugly heads, again and again. By issue 8, even the main character appears sick of the endlessly repetitive plotlines: “Oh, no…not another mindless mob,” he thinks, wearily batting away a crowd of pitchfork-wielding villagers for what feels like the series’ hundredth time.

Things go from bad to worse after Wrightson’s replacement by artist Nestor Redondo in issue 11. As it turns out, though, Redondo is the book’s biggest saving grace in these issues; it’s the plots themselves that descend into Lovecraftian silliness and, for the first time, begin to rely heavily on cliffhanger endings. Before long, Holland is doing less of the well-written introspection that characterized Swamp Thing’s early issues than he is traveling through time to fight dinosaurs and Roman gladiators. It’s clear in the final issues collected in Roots of the Swamp Thing that, without the collaboration of Wrightson or the Mr. E subplot to give his stories more long-term direction, Wein was floundering. Issue 13 was his last; afterward, the title’s writing duties passed back and forth between David Michelinie and Gerry Conway. Redondo would remain the book’s artist until its penultimate issue just under a year later, when it was finally cancelled.

In all fairness, my harshness toward this collection’s last few issues has less to do with their respective strengths and weaknesses – they are perfectly competent, if fairly by-the-numbers, superhero tales – than it does with the unfavorable way those stories compare to the earlier issues. It seems to me that the mood and character established in those first issues allowed them to tell stories that were noticeably different from the ones being published in other Marvel and DC comics at the time, and it’s a shame to see such potential fall to pieces in the end. Still, the first seven issues collected in Roots of the Swamp Thing are 1970s horror comics par excellence, worthy of attention by those interested in the history of comic books and American horror stories alike. While the other issues may hold interest for some, it’s probably safe to say that, compared to the earlier material, they seem little more than a curiosity in their protagonist’s long publishing history.
Posted by Marc at 8:00 AM 2 comments: 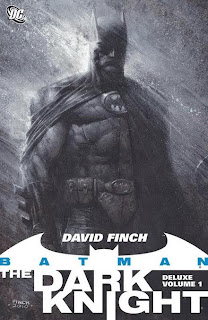 Batman – The Dark Knight: Golden Dawn is one of the latest entries in the seemingly endless parade of comic book stories that rely on inserting new characters into the “never-before-told” pasts of established ones. In this case, as in most others, the new character makes a surprising return in the hero’s present, dredging up old memories and inevitably involving the hero in some conflict which is further complicated by the nature of the characters’ past relationship.

The dilemma faced by all such stories, of course, is how to make the reader interested in the new character and his or her relationship to the protagonist. Unfortunately, writer/artist David Finch fails spectacularly in addressing this issue in Golden Dawn. In this book the new character is named, without any detectable irony, “Dawn Golden.” Finch tells us that she was Bruce Wayne’s best friend before the death of his parents as well as his first romantic interest, and that now she is a young socialite in Gotham City who has gotten herself into some trouble. (As far as I can tell, we’re not supposed to wonder why she seems to be at least a decade younger than Batman in the present, despite the two appearing to be roughly the same age in flashbacks.)

Since Dawn spends most of her time on-panel either unconscious or with her mouth agape in wordless terror as Batman attempts to save her from peril, there’s little space for the most crucial aspects of this sort of plot: making the new character matter to the plot and to the reader. Dawn is little more than a cardboard cut-out of a damsel in distress, a role that could have been filled just as well without any of the murky backstory. Furthermore, she and Bruce Wayne never even meet in the present – her only interactions are with Batman. The fact that she and Bruce were childhood friends is entirely irrelevant to the story.

The paper-thin plot is perhaps to be expected – the series these issues come from, Batman: The Dark Knight, was created for Finch so that he could write and draw whatever Batman stories he wanted, regardless of what was happening in other Batman comics at the time – but that does not make its faults any more excusable. The comic doesn’t even succeed as a vehicle for Finch; apparently unable to keep up with his deadlines after just three issues (which were released over the course of eight months), Finch is replaced in issues four and five by Jason Fabok and a team of no less than six different inkers. It’s around this time, as well, that Paul Jenkins comes aboard as Finch’s much-needed co-writer (although he goes completely uncredited in the collected edition).

The issues Finch does manage to draw are filled mostly with splash pages of monsters and demons drawn in the dark, neo-Image style that he’s become famous for. More than anything, in fact, the story seems a fairly blatant re-writing of Spider-Man: Torment, the first story arc in Todd McFarlane’s early ’90s Spider-Man series. Both stories attempt to equate philosophical questions about life, death, and memory with uninspired (if not necessarily ugly) drawings of the supernatural; both also feature giant reptiles as major villains: the Lizard in Torment, and Killer Croc in Golden Dawn. The irony of these similarities is that Torment was itself an attempt to transplant the dark-and-gritty essence of late-’80s Batman comics into the Spider-Man franchise (the cover of Spider-Man #1 even sported a nonsensical caption that read “The Legend of the Arachknight”).

But for whatever other problems Golden Dawn has, its treatment of Dawn Golden is by far the most troublesome. Even worse than the book’s failure to characterize Dawn in any but the shallowest of ways (she’s extremely beautiful, in case you hadn’t guessed) is its “resolution” of her “character arc” (note the quotation marks); in the end, she is strapped to a table, tortured, and murdered by demon-worshipers. Etrigan (a “good” demon, apparently) shows up in a deus ex machina plot twist to defeat the bad guys, and his absurd, rhyming eulogy for Dawn is reflective of the blasé attitude the book has held towards her all along: “The spirit is gone, you must let her go. Know that you saved her, even so.” And then poof, he vanishes.

To see a female character developed so poorly and treated with such contempt (by her own creator, no less) is both sad and disturbing, especially in a comic as high-profile as this one. If art has just one obligation, it’s not that it need be entirely original or even technically well-crafted; it’s that it be created with good intentions – because if the aim of art is not to make the world a better place, then why bother? I’ve tried, but I see little that is good in Golden Dawn – only a book far uglier at its core than its glossy artwork would have us believe.
Posted by Marc at 6:00 PM 1 comment: