Review: Sabretooth: Back to Nature 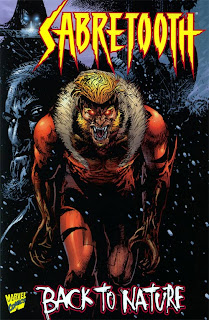 As I’ve mentioned a few times before, I’m not the biggest fan of villains who are psychopathic killers, or ones who are just straight-up evil. I’m much more interested in the complexities of a character like Magneto, who sincerely believes that he’s doing the right thing even when people are dying as the result of his actions. Characters like these give us the opportunity to reassess the heroes – to ask what reasons the “good guys” have for fighting, and thus to either affirm their actions as truly “heroic” or to recognize them as being more flawed than perhaps we initially thought.

Not so for a character like Sabretooth. Here is an individual who relishes in murder and depravity, for no other reason than that some people seem to think that makes him a good foil for Wolverine. And while I suppose he does occasionally work on that level – that is, as an external manifestation of the “man vs. beast” conflict constantly being played out in Wolverine’s mind – as his own character, Sabretooth is one-note and, quite frankly, boring. (One exception is Frank Tieri’s depiction of Sabretooth in the short-lived ongoing Weapon X series, in which the character takes a supporting role and is depicted as being slightly dynamic. Not coincidentally, this is one of the few comics where I find Sabretooth tolerable for more than a few pages.)

I’m the kind of person who’s always open to reevaluating these kinds of things, though, and I thought an original graphic novel starring Sabretooth might be just the thing to change my mind. However, Sabretooth: Back to Nature is every bit as dull as I’ve made the character out to be in the preceding paragraph. In the end, the book is really just a vehicle for a plot point that will later play itself out in X-Factor (more on that later). It’s a story that should have been told in a normal comic book – like X-Factor itself, for example – rather than thrown between two cardstock covers and slapped with a higher price tag.

Anyhow, the book begins with Sabretooth attempting to escape from a restraining collar designed to control his homicidal impulses. The collar is the handiwork of X-Factor, which at this point was basically a government-sponsored branch of the X-Men. At this point in Marvel history, Sabretooth was essentially the team’s captive, and he was regularly brought on missions with them. Interestingly, this wasn’t the first time the X-Men had attempted such a plan to “reform” Sabretooth, and it wouldn’t be the last either. Needless to say, it has yet to work out. 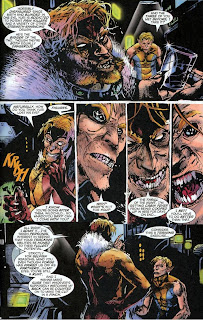 Unable to break free of the collar, Sabretooth resigns himself to tagging along with X-Factor member Wild Child on the latter’s quest to find the serial killer who murdered his ex-girlfriend. This might have been a more engaging set-up if Wild Child had at any point ever been an even slightly compelling character, but alas. This leads to the first of many instances in which Sabretooth possesses far more knowledge than he possibly could given the immediate situation. The killer, we learn, likes to chop his victims up into little bits, and from just this one shred of information, Sabretooth intuits that the killer is none other than his old (previously unheard of) foe, the moronically named “Chop Chop.” I’m fairly certain that more than one serial killer in human history has used a similar modus operandi, so how Sabretooth is so confident is a mystery. So is the full psychological workup of Chop Chop that Sabretooth rattles off on the following page, sounding more like a psychologist than the homicidal nutjob he is.

The story from here on out is almost too predictable to even go into details: the characters go after the killer, they all fight, and (shockingly) Sabretooth kills Chop Chop and his brother Yuri. There’s a subplot involving Wild Child’s inner struggle over whether it’s acceptable to kill people, but it’s rendered fairly impotent by the fact that the bad guys in this story are hardly portrayed as human beings at all. As I said, though, the main point of the story is to plant a seed that will later play itself out in X-Factor, and that happens when Sabretooth figures out a way to overcome his restraining collar in order to kill the bad guys.

So how does he do it? He steals some painkillers from Chop Chop and Yuri, then downs a few fistfuls of them so he can’t feel the electric shocks administered by the collar. Now, let’s think about this for a moment. According to writer Jorge Gonzalez, X-Factor has equipped Sabretooth with a collar that inhibits both his mutant powers and his killing instinct…but not the effects of painkillers? Seriously? Somehow, I think he could have come up with a better explanation for returning Sabretooth to his mass-murdering status quo.

I was going to describe how bad the art is in Back to Nature as well, but I think at this point I’ve already made my case against the book (rest assured, though, the art is pretty awful). Instead, I’ll just say that even though I was able to get this book for a mere fraction of its already low cover price, it wasn’t even slightly worth it. You may appreciate it a bit more if, unlike me, you actually enjoy reading about Sabretooth as a solo character – but, to be perfectly honest, I really doubt it.