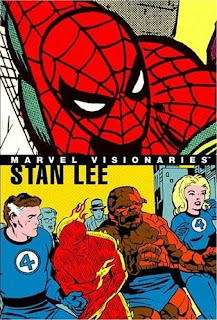 When Marvel launched its creator-focused line of oversized Visionaries hardcovers in late 2004, it only made sense to start with the two most prominent figures in Marvel history: Stan Lee and Jack Kirby. For both books, the process of selecting which issues to include couldn’t have been an easy one. Perhaps it’s wise, then, that instead of trying to create “best of” collections for either, Marvel opted to create volumes that simply give the reader a feel for the sheer range of these creators’ talents. Indeed, Marvel Visionaries: Stan Lee excludes a fair number of stories I would have numbered among the writer’s “greatest,” but that’s quite all right – after all, you would need multiple books to collect all of those stories, and the ones they did choose do just as good a job of demonstrating the sheer diversity of Lee’s talent.

The book opens with a great biographical introduction to Lee, written by longtime Marvel writer Roy Thomas (who was himself the subject of his own Visionaries collection); it’s a great crash-course on the writer’s history at Marvel, especially if you haven’t read anything else by or about him. Lee’s first-ever published work, from the pages of Captain America Comics, occupies the first few pages. While it’s fairly primitive in comparison to Lee’s later work, the stories are still interesting to see – and hey, you have to start somewhere, right?

The years between Lee’s first work in the Golden Age and the debut of the Fantastic Four in 1961 make up the most underrepresented time period in this collection, with only a few short stories from the mid-1950s. They’re nothing to write home about, really, although “The Raving Maniac,” a commentary on the public outcry against comic books going on at the time, is kind of amusing. The real meat of this collection comes in the form of Lee’s Silver Age superhero work, and this book delivers a great variety of characters and artists. It would have been easy for Marvel to include a ton of origin stories in this book, but luckily, they only include one – Spider-Man’s, which is arguably Lee’s best.

From here, the superhero stories range from an early issue of Daredevil – featuring an unlikely fight between the title character and the Sub-Mariner – to some of Lee’s final work as a regular writer at Marvel, including a Bronze Age Dr. Strange comic drawn by Barry Windsor-Smith. Along the way, the book showcases Lee’s ability to tell short, self-contained stories (such as a quick FF tale answering some of readers’ most frequently asked questions), in addition to well-developed, multi-issue arcs.

The first arc in the collection is a three-part Thor story in which Loki tricks the thunder god into switching bodies with him. Unaware of Loki’s evildoing, Odin banishes Thor (in Loki’s body) to Mephisto’s realm, while the actual Loki runs rampant in Midgard. The story is actually more notable for its art than its writing – it features Jack Kirby’s final work on Thor, and some of Neal Adams’ first at Marvel – but it’s a good example of the overblown, faux-Shakespearean style Lee was fond of using in comics dealing with gods and god-like characters. 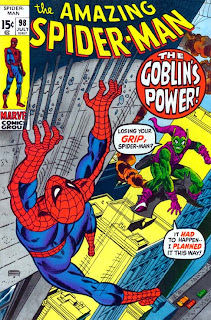 Taken by itself, the Thor story might lead someone new to Lee’s writing to believe that he’s simply a cheesy writer. However, the book follows this story with an extremely well-grounded story arc from Amazing Spider-Man, which features Harry Osborn’s battle with drug abuse and the return of the Green Goblin. The drug subplot is a notable one in comics history, as it made Amazing Spider-Man one of the first mainstream comic books to be published without the Comics Code Authority’s seal of approval. Lee had actually been personally asked to do a story dealing with substance abuse by the United States Department of Health, Education and Welfare, and the backlash resulting from the Code’s refusal to approve it led to a loosening of its restrictions and a more progressive era in comics in the years that followed. But the thing that’s most impressive about the story is how subtly it gets its message across and how intricately Lee weaves it into what otherwise simply would have been a tale about the return of one of Spider-Man’s old enemies.

The book ends by reprinting a number of vintage pages containing Lee’s famous “Stan’s Soapbox” column, and these are a real treat. The column was his way of connecting with readers on a regular basis and letting them know what was going on behind the scenes at Marvel (remember, these were the days before Twitter!). They make me eager for a complete collection of these pages; and yes, it’s true that the Hero Initiative published a book with just the text of the columns themselves, but I’d love to see a book consisting of scans of the pages in their entirety.

Whether you’re a new or old fan of Stan Lee, this book is a great read. It represents a huge variety of his work, some of which is a far cry from the sort of thing we’re used to seeing reprinted again and again in these types of collections. There are relatively few duds, too, the only real one being a short Spider-Man story (reflecting on the 1995 death of Aunt May) that Lee wrote long after he had stopped working in comics on a regular basis. Even despite its relative weakness in comparison to his other work, though, it contributes to the collection’s goal of showing that Lee is a writer unafraid to tackle any kind of story – not to mention one who almost always delivers a fun and entertaining experience in the process.