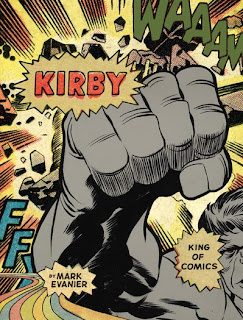 Kirby: King of Comics was a pretty big deal when it came out a couple of years ago. It had been nearly fifteen years since the death of Jack Kirby, and finally, it seemed, the definitive biography of one of the best (if not the best) artists in comic book history had arrived. And although there are certain parts of it that could have been improved, I’m happy to say that for the most part, it delivers on expectations.

Writer Mark Evanier is really the perfect fit for a biography of Jack Kirby – having worked as Kirby’s personal assistant starting in the late 1960s, and having written hundreds of comics and TV show episodes himself (including every episode of Garfield and Friends), he not only understands the craft involved in telling a story, but he also probably knew Kirby better on a personal level than most people did. He certainly knew Kirby better than anyone on an artistic level, having witnessed firsthand the many ways in which Kirby’s style evolved over the years.

Evanier begins the story of Kirby’s life with the artist’s rough-and-tumble childhood. Raised in New York City during the Great Depression, Kirby (born Jacob Kurtzberg) spent much of his youth getting into trouble with a gang of neighborhood kids – a group that would serve as the archetype for a number of Kirby’s creations, including the Newsboy Legion, the Boy Commandos, and, much later, the Yancy Street Gang, with whom the Thing has a comedic ongoing rivalry in Fantastic Four. From the start, Evanier does an excellent job of demonstrating the ways in which Kirby portrays various aspects of his youth in his work.

As we follow Kirby throughout his early career, we come to see him as a young man dedicated to the art of comics but struggling to land assignments that would stick. By providing information and artwork for every major Kirby creation (and plenty of lesser-known ones, too), Evanier paints a nuanced picture of Kirby’s personality, values, and work ethic, as well as his love for the medium. He also makes it clear that Kirby’s career was defined in a big way by two major partnerships: one with Joe Simon that lasted from 1940 to 1955, and the other with Stan Lee from the late ‘50s to the end of the following decade. Both partnerships took Kirby’s work to increasingly greater heights over the years, setting him up for an eventual explosion of creativity (on his own, at DC) that would propel him through the rest of his career.

One of the biggest draws of this book is the sheer amount of original artwork presented, much of it never before seen, and the fact that the pages are so large is a huge plus. There are covers, preliminary and finished interior artwork, sketches and commissions, you name it. My favorite thing reproduced in the book, though, has to be a letter that Kirby sent to his wife Roz during his stint in the Army during World War II. Not only do the words border on absolute poetry, but the bottom of the page contains a beautiful depiction of faceless, trenchcoat-laden soldiers running through the night – not in panic, you can tell, but in patriotic duty and brotherhood. It’s pure Kirby, and in the best way possible.

I only have a few complaints with the book, and although they’re largely eclipsed by everything it does right, they’re still worth mentioning. One is that Evanier devotes barely any attention to the various inkers who worked with Kirby. In particular, it would have been interesting to know more about what Kirby thought of Vince Colletta, who has come under heavy fire in recent years for the many alterations he made to Kirby’s linework during his inking process. Evanier does devote a few pages to Joe Sinnott, who in my opinion was the best inker Kirby ever had, but it would have been nice to hear about some of his more controversial artistic collaborators as well.

My other main problem with the book is that it’s simply too one-sided at times. In the past, Stan Lee has been depicted as a villain in respect to his role in Kirby’s late-‘60s departure from Marvel. Evanier doesn’t take that exact approach but he doesn’t do much better either, arguing that Stan was little more than a corporate stooge who was “jockeying for his own place” in the company at Kirby’s expense. But as Evanier himself admits earlier in the book, Kirby was never a very apt businessman; in the early days, it was Joe Simon who did all the heavy lifting as far as getting assignments and ensuring that he and Kirby were always able to put food on the table. I think the likelier scenario here is that Kirby wasn’t as business-savvy as he should have been, and he simply paid the price for it. Evanier also sort of takes for granted that Kirby was the best comic book artist who ever lived, and while I’m certainly tempted to agree with him, I think that many people who don’t will feel that certain parts of the book (especially towards the end) border on hagiography.

However, the issues I have with Kirby: King of Comics aren’t so major that anyone with a love of Kirby or comic book art in general should avoid reading it. It’s essentially a biography and an art book rolled into one, packed with astounding images and written by the person who’s undoubtedly most qualified for the job. It’s easily the kind of thing I see myself pulling off the shelf again and again.