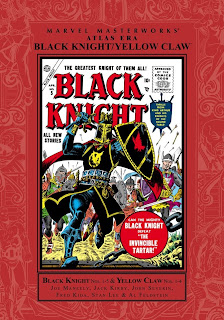 One of the more unusual releases in Marvel’s long-running hardcover series, Marvel Masterworks: Atlas Era Black Knight/Yellow Claw is both a peculiar mash-up of two very different series and a true gem of 1950s comic book storytelling. Make no mistake, there is absolutely no connection between Black Knight and Yellow Claw – one is medieval in setting, while the other is a contemporary spy thriller – aside from their both being short-lived series with art by Joe Maneely. But it’s a nice way of packaging the two titles nonetheless, since neither is long enough to have warranted an individual release.

I went into the book expecting Black Knight to be a little dull, to be honest; Errol Flynn’s depiction of Robin Hood aside, I’m not that interested in the 1940s and ‘50s Hollywood version of the Middle Ages, from which this comic very obviously takes its cues. After only a few pages, though, it became clear that writer Stan Lee was also influenced by, of all things, Golden Age superhero comics. In fact, there’s a lot more to the Black Knight than the average medieval protagonist. Although he spends most of his time as King Arthur’s mild-mannered nephew, that’s really just his secret identity; whenever the king’s life is in peril, he pretends cowardice and steals away to become the Black Knight. In his daily life he’s despised by the court, especially by the woman he loves – who, in the typical fashion of superhero stories, is infatuated with his mysterious alter ego. The formula isn’t at all unlike the one used in the early appearances of characters like Superman, Captain America, and Spider-Man, but seeing it transposed into medieval times gives it a unique spin.

Yellow Claw is a fascinating read as well, albeit for completely different reasons. Although the first issue, like the majority of Black Knight, is drawn by the excellent Joe Maneely, the writing leaves a little to be desired. Penned by Al Feldstein (the former head writer for EC Comics, which had closed shop for good two years earlier), the Yellow Claw character is essentially just a clone of Fu Manchu, an evil Chinese mystic bent on world domination. Despite the formulaic structures of this first batch of short stories, Feldstein does do an admirable job of dodging the racist undertones that have plagued most literary works featuring Fu Manchu and characters modeled after him – and he does so in large part by giving the stories an Asian-American protagonist, in the form of FBI agent Jimmy Woo.

Interestingly, though, Yellow Claw is less remembered for the positive (and progressive) portrayal of its Asian-American hero than it is for the fact that it heralded Jack Kirby’s return to Marvel Comics after several years working for the competition. Kirby picked up the book’s reigns starting with the second issue, from which point he both wrote and drew the comic for three full issues before its cancellation. This was the first work Kirby had done at Marvel since his departure from the company in 1941, and the energy he brings to the page is pretty exciting, even if the stories themselves are too short to leave much of an impact. Still, with its off-kilter plots and bizarre-looking bad guys, it’s a weird and wonderful comic in that special way that just screams “Kirby.”

As good as Kirby’s work is, it’s also worth pointing out what a brilliant and imaginative artist Maneely was as well. His work on Black Knight made me feel I’d been thrown into some early MGM Technicolor spectacular, and his one issue of Yellow Claw is notable for the sheer breadth of convincing facial expressions throughout. Sadly, Maneely was killed in a car accident (at the age of only 32) just three years before the beginning of Marvel’s 1960s superhero revival. It’s fascinating to think of how much different the comics industry might have been if he had lived to contribute ideas to the Marvel Universe, and I’m looking forward to learning more about him in Michael Vassallo’s upcoming biography (which is essentially previewed in a lengthy essay by Vassallo at the end of this volume).

As wildly different as Black Knight and Yellow Claw are, this book turned out to be a really great read. This is a fun book for continuity buffs, too – Jimmy Woo continues to run around with S.H.I.E.L.D. and the Agents of Atlas today, and it was revealed at one point that the modern Black Knight is directly descended from the medieval one depicted here. Between the quality of the stories and the fact that it features the work of two truly excellent artists, it’s an incredibly nicely done package.