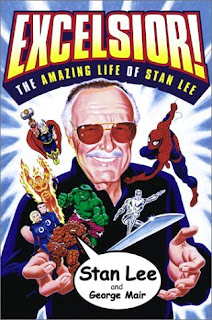 The general outline of Stan Lee’s career in comics is well-known to many of his fans. Starting out in the early 1940s as a gofer for his uncle Martin Goodman’s publishing company, Timely Comics (later known as Marvel Comics), young Stanley Lieber quickly finagled his way into more and more writing assignments on titles like Captain America Comics, Mystic Comics, and USA Comics. After the departure of Jack Kirby and his partner Joe Simon in 1941, Lieber (under the pen name “Stan Lee,” and only 19 years old at the time) was made temporary editor-in-the-chief – a position that Goodman apparently wasn’t in any hurry to fill, as Lee would hold onto it for the next thirty years. During that time, he would modernize, humanize, and revolutionize the way that superhero stories were told.

In Excelsior! The Amazing Life of Stan Lee, the writer relates all of this information (and much more) in his own inimitable style. Along the way, we learn about Lee’s personal life – his childhood and initial (usually hilarious) attempts at finding a job, his brief stint in the Army during World War II, how he met his wife, and the creative processes behind some of his most beloved stories and creations. The stories about how he came up with heroes like Spider-Man and the Fantastic Four will be familiar to many fans, but it’s nice to see them all in one place and with new details, along with Stan’s always thoughtful and amusing commentary sprinkled throughout. This is, without a doubt, the most comprehensive and definitive record we’re likely to ever get from Lee himself on just how the Marvel Universe began.

You might expect Lee’s autobiography to be somewhat one-sided, but I was surprised at how honest he was, especially when it came to his relationships with Jack Kirby and Steve Ditko – both of whom ended their association with Lee (and Marvel Comics in general) with considerably hard feelings. He’s very fair to both artists, fully acknowledging their tremendous contributions to the field of comics and admitting that he wishes things hadn’t ended so unpleasantly. He claims not to know the full reasons for either one leaving, and I believe him; neither artist was ever very good at expressing frustration in a constructive manner, and Lee has never been the kind to ruffle people’s feathers on purpose. He does go into some detail about the problems he was aware of (Kirby was upset that Lee got more attention in the press for Marvel’s success than he did, for example), and about the lengths he went to in order to try to amend them.

Less familiar to fans, I expect, is the story of what Lee did after he resigned as Marvel’s editor-in-chief in 1972, and this was actually the most interesting part of the book for me. As a matter of fact, he was still working for Marvel as much as ever, but in a completely different capacity – first as a public speaker on the college circuit (where Marvel Comics had become incredibly popular), and later as Marvel’s head honcho in Hollywood. One area I would have liked to see discussed in more detail is the Stan Lee Media catastrophe of the late 1990s, which involved Lee’s declaring bankruptcy and the arrest of his business partner for stock manipulation. Lee makes the whole thing seem pretty cut-and-dry, and perhaps he’s to be admired for that (I’m sure the finer details are more convoluted than I could possibly comprehend), but it just seems a bit glossed over. Still, if I had a choice between more on Stan Lee Media or having as much information as he included on his early life and the creation of the Marvel heroes, I would take the latter. The book doesn’t contain any information on the last ten years, since it was published in 2002, but perhaps someday soon Fireside will reissue the book with an additional chapter or two at the end. It would be especially interesting to get Lee’s thoughts on the current ongoing legal battle between Marvel and Jack Kirby’s heirs.

Excelsior! is a fairly quick read, partly because of its unusually large font size, but mostly because it reads in the same narrative voice that Lee spent years cultivating in his comics and in his “Stan’s Soapbox” column – a voice beloved to his many fans, and one that new readers, I’m sure, will find just as captivating. And that’s ultimately what makes it so worth the read: as much as you may think you know about the history of Stan Lee and Marvel Comics, absolutely nothing compares to hearing it straight from “The Man” himself.