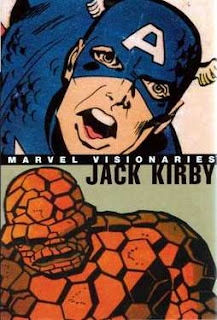 Much like the Stan Lee volume of the Visionaries series, Marvel Visionaries: Jack Kirby takes an approach to the career of one of Marvel’s greatest creators that’s more befitting of the term “catch-all” than “greatest hits.” But while that worked well for Lee, I’m not sure it works as well for Kirby, whose work at certain points (especially during his third prolonged stint at Marvel, during the 1970s) occasionally misses the mark. Thankfully, most of the comics in this volume are great reads, with only a few falling into the “subpar” category.

There are more Golden Age stories in this book than in Marvel Visionaries: Stan Lee, and it’s especially nice to see a story reprinted from Red Raven Comics – a series that lasted only one issue before its cancellation in 1940, and which fans have been patiently waiting to have collected in its entirety for several years now. In a rather nice touch, this collection also includes a Captain America story from every era that Kirby worked on the character. Unfortunately, though, Cap’s Golden Age origin story suffers from a pretty bad restoration job. It’s readable, but having seen much better reproductions of the same issue in other collections, it’s hard for me to look at this one for more than a few moments at a time. Kirby’s latest Captain America story (from 1976) is underwhelming too, but for different reasons; while the artwork is great, the hamfisted plot and dialogue both fall flat.

I found the three issues of Thor collected here to be a little disappointing too, although I think that has more to do with personal taste than the comics’ objective quality. Kirby’s linework is somewhat hindered by Vince Colletta’s inking job, to be sure, but the trouble for me had everything to do with the story. It features the first appearance of the Knights of Wundagore, a group of super-evolved animals that behave like the Knights of the Round Table – suits of armor, broadswords, the whole bit. The simple fact is that I’ve never liked them, and I probably never will. But if the concept sounds it’s like your cup of tea, then I imagine you’ll find the story perfectly satisfying. 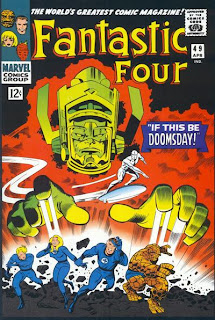 The early to mid-1960s are my favorite period in Kirby’s career, and the one in which I think he first began to reach truly exceptional artistic heights. It’s the one most represented here, and the centerpiece of the collection is made up of four stand-out issues of Fantastic Four from 1966. The first three issues detail the coming of the world-eating alien Galactus and his herald, the Silver Surfer. On the most basic level, they’re not that different from most alien invaders you’re likely to see in comics from this time: viewing the human race as completely insignificant, their aim is nothing short of the total destruction of Earth. The difference between this and most invasion stories, however, is that Lee’s writing and Kirby’s artwork combine to instill such otherworldly gravitas to both Galactus and the Surfer that, much like the Fantastic Four themselves, you can’t help but be mesmerized by the cosmic goings-on in each and every panel. This is Lee and Kirby firing on all cylinders, and it’s truly something to behold.

If the three-part Galactus story is the archetypal Lee/Kirby superhero masterwork (and trust me, it is!), then the fourth issue is absolute Silver Age perfection. To describe it in any detail would be to spoil it for those who haven’t read it, but suffice it to say that this issue has no less than four entire pages which remain, to this day, among the most recognizable and iconic in the history of superhero comics. I honestly can’t find the words to articulate how much I love this comic and the three issues that precede it, other than to say that they’re some of the most emotionally affecting and beautifully illustrated stories I’ve ever encountered in this medium. Stories like these are what make me want to read comics.

There’s plenty else to discover in Marvel Visionaries: Jack Kirby, but telling you any more at this point would just be spoiling the surprise. Although it’s not as well-rounded overall as the Stan Lee volume, a handful of the stories are superior to anything else collected in either book. In fact, the Fantastic Four issues are absolutely four of the best comic books of the Silver Age, and they number among my personal all-time favorites as well. They’re worth the price of admission alone – not that they’re the only enjoyable comics in this collection, by any means.