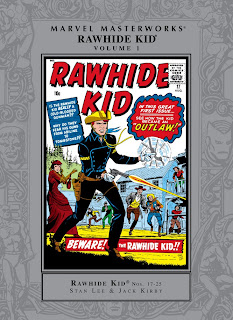 Rawhide Kid was one of the earliest Silver Age collaborations between Stan Lee and Jack Kirby, but for whatever reason it’s also one of the least talked about. Beginning just one month before the premiere issue of Fantastic Four, the Lee/Kirby version of the Rawhide Kid was actually what we might call a “relaunch” or a “reboot” today. Sixteen issues of the series, written by Lee and illustrated mostly by Bob Brown and Dick Ayers, had been published from 1955 to 1957, when it was cancelled. It wasn’t until 1961, four years after Kirby had rejoined the ranks of Marvel, that a 17th issue finally saw print. It might as well have been the first issue of a completely different series.

Much like Atlas’s short-lived Black Knight series in the 1950s, Rawhide Kid is surprising in its resemblance to Marvel’s early superhero comics. Like Spider-Man and the Hulk (and unlike the traditional heroes of Silver Age western comics), the Kid is a hopelessly misunderstood, even hated, figure. Branded a murderer and hunted by the law, he’s actually a good-hearted young man who does his best to help out in whatever town he happens to find himself in, no matter how untrusting the locals may be. Some of the best issues in this collection end with the Kid actually playing into his bad reputation to save the day – a gesture that both ingratiates him to the townspeople and necessitates his swift departure at the end of the story.

Lee’s success at shaping the Kid into such a tragic figure (and in so few pages, too) is pretty impressive, especially given that there’s not much of a supporting cast for him to play off of. The lack of recurring characters is the book’s only real weakness, since it leads Lee and Kirby to constantly fill space with scenarios that get somewhat repetitive after a while. In the stock story that grows most tiresome, a generic desperado challenges the Kid to a shoot-out in the hopes of proving himself the fastest gun in the West, only to be shown up by the Kid’s dazzling speed and accuracy with a pair of Colts. This being a mostly bloodless era in comic book history, the Kid’s enemies are always defeated the same way, with their guns harmlessly shot out of their hands.

It’s this basic formula, however, that makes the more unique stories really shine. One of my favorites, in which the Kid vows never to use his weapons again, reminded me of the excellent Bruce Lee film The Big Boss – a fitting connection, since Stan Lee was a professed fan of the martial arts actor (but also an interesting one, in that the comic came out ten years before the movie). Kirby’s artwork here is excellent, and for whatever reason, it’s actually significantly better, from a technical standpoint, than the first few issues of Fantastic Four. The reasons for this difference aren’t clear, but perhaps Kirby felt a simpler style was more befitting of a comic about superheroes (a genre which he hadn’t drawn regularly for a number of years at this point), while a more detailed one was better for westerns.

Either way, Kirby made the right decision; Rawhide Kid legitimately evokes the feel of a classic Hollywood western, and the characters of Fantastic Four stand out, as superheroes arguably should, in colorful, iconic, pop art style. But more on the Fantastic Four next time. For now, Rawhide Kid is a great example of a Lee/Kirby work that straddles two eras of comics – one in which storytellers still clung to the familiar tropes of the Golden Age, and another in which they pushed comics to a place the medium had never gone before. It was a time of emerging self-awareness, playful experimentation, and reluctant ambition. It was a time when Stan Lee and Jack Kirby stood on the edge of greatness.