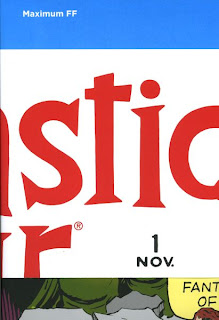 There’s probably little to say about Stan Lee and Jack Kirby’s Fantastic Four that hasn’t already been said by people more knowledgeable and more eloquent than me. Still, I feel like I’m constantly reading comments from people who have never read a single page of their work, and I find that terribly saddening. If you’re one of the many people who haven’t experienced this seminal run at least in part, I encourage you to pick up the first Marvel Masterworks: Fantastic Four trade paperback, which collects the first ten issues of the comic. For those already initiated, though, Maximum Fantastic Four is a truly amazing presentation of the series’ first issue, one that fully lives up to its name.

Conceived by the novelist Walter Mosley as a “visual exegesis” of Fantastic Four #1, the book provides perhaps the most innovative reproduction of a single comic book that I’ve ever seen. Nearly every panel is blown up to extraordinary size and devoted its own entire page, with some of the pages folding out to give certain panels an even more dramatic flair. Segments of dialogue and narration are occasionally pushed off the page in order to give more room to the artwork, placing the emphasis on the utter spectacle of Kirby’s artwork rather than the plot itself.

That being the case, Maximum Fantastic Four certainly isn’t the way to read this issue if you’ve never read it before. But if (like me) you’ve already read it several times or more, the presentation here is more than a breath of fresh air; it’s a release, a chance to marvel at the sight of super-powered men (and one super-powered woman) doing the spectacular things that we only wish we could do. Indeed, this book suggests a way of reading comics completely different from that which many readers today are accustomed to – one in which each and every panel is a work of art unto itself, and worthy of individual attention.

It’s a way of reading that I’ve embraced (without even realizing it) ever since I started reading comics by Lee and Kirby as a kid. Over the years, I’ve often puzzled over why I seem to take longer to read my comics than a lot of people do. The answer, it’s clear to me now, is that while I often pause to admire an artist’s work, many readers simply let their eyes fly across the page without taking the time to truly absorb what they’ve experienced visually. In many cases, especially when the artwork is average or subpar, there’s not much fault to be found in that; but, as Mosley reminds us with this book, the rewards for taking our time with artists like Kirby are nearly limitless.

The main content is supplemented with wonderful essays by Mosley and Mark Evanier (author of Kirby: King of Comics). In addition to explaining Mosley’s reasons for creating the book, the two writers also contextualize the comic within its time and provide the reader with a deeper understanding of its enduring influence on American popular culture. If you don’t already believe that it was pure magic flowing from Lee’s typewriter and Kirby’s pen when they created the Fantastic Four, these pieces, in combination with the unique presentation of the material itself, will likely change your mind. In the end, Maximum Fantastic Four is truly an affirmation of the genius of two creators at an artistic peak, one of the many peaks that each would experience throughout his long career in comics. And even more importantly, it’s an affirmation of why we read comics – of that sense of exhilaration and wonder that draws us back again and again to the medium we love.