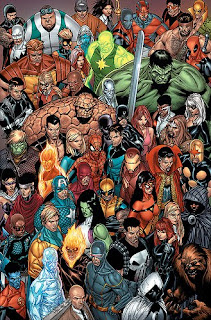 It all started some time in April. Having scoured the Internet for a Marvel-themed list in the vein of the Collected Editions blog’s wonderful DC Trade Paperback Timeline and turning up relatively nothing, I decided to work out a proper reading order for Marvel’s trade paperback and hardcover collections. At first it was just something I was doing for myself, but as my list grew longer and more comprehensive, I realized that if I was confused – me, a person who’s generally pretty familiar with Marvel’s collected editions and publishing history – there must be many more people out there with the same, if not even more, questions. And so the idea of creating a fully annotated Marvel Trade Paperback Timeline for this blog was born.

Today I’ve posted the first part of that timeline, starting with the nearly line-wide relaunch that took place in 1998 (following the events of the miniseries Heroes Reborn: The Return) and extending to the beginning of J. Michael Straczynski’s tenure on Amazing Spider-Man in 2001. As I mentioned in my review of Captain America: To Serve and Protect, the first book currently listed on the timeline, this is where the “current” Marvel Universe really got its start. While many titles obviously have roots going back to the early 1960s, I think the shift in editorial direction (and overall quality) that took place in the late 1990s makes this as good a demarcation point in Marvel’s publishing history as any. It’s also the time period that first got me interested in making this timeline – Marvel has been reprinting a great deal of material from this era lately, much of it for the first time.

In the near future, the timeline will be expanded to cover books taking place both before and after the ones listed currently – ideally, it will eventually cover everything from 1939 (when Marvel Comics #1 was first published) to the present. The offline version of the timeline is nearly finished, although there are several sections that require a good deal more reading and research on my part before they can be sufficiently completed. I wanted to start by posting just one part of the timeline so that I could get your feedback and suggestions as well as deal with any necessary formatting changes now, rather than later. I truly hope this timeline will help other people as much as the process of creating it has helped me. If you have any questions or comments (any at all!), please feel free to leave a comment on this post or to send an email to marveltimeline@gmail.com.

Before signing off, a few acknowledgments are in order. Both Comic Book DB and Trade Paperback List have been invaluable resources in making this timeline so far. Thanks as well to Ian from Trade Reading Order, where he’s created an excellent reading order for DC’s collections that complements the one at the Collected Editions blog quite nicely. He’s also working on a Marvel reading order which I think will similarly complement the one I’ve started here, when we’re both finished!

So, I think I’ve probably rambled on long enough. Feel free to check out the timeline (either by clicking here or on the link in the sidebar) and tell me what you think!
Posted by Marc at 1:00 AM