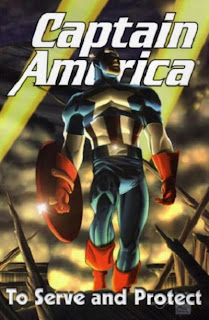 To say things were bad for Marvel in the 1990s would be an understatement. The entire comic book market had been all but destroyed by rampant speculation at the beginning of the decade, and things were so bad by the mid-‘90s that Marvel was totally bankrupt – both creatively and financially. The company’s solution? Write half of their characters completely out of the Marvel Universe, and then sell them outright to the highest bidder.

The plan never went through, thankfully, although the basic outline stayed in place: at the end of the company-wide Onslaught crossover, the Avengers and the Fantastic Four were shunted off to an alternate universe where their stories began completely from scratch. Their new series were written and drawn mostly by creators from Image, including the infamous Rob Liefeld – folks known less for their ability to make good comics than for their ability to sell them. About a year later, Marvel realized what a horrible idea this was and brought the characters back to the main universe, re-launching them with new series and new creative teams. If you’ve ever wondered when the Marvel Universe as we know it today got its start, it was here, in 1998, with the simultaneous series reboots of Captain America, Iron Man, and the Avengers, among others.

Captain America: To Serve and Protect collects the opening issues of the new Captain America series, and to me it’s one of the books most representative of the sea change that took place at Marvel in the late ‘90s. It would have been easy for writer Mark Waid to simply brush everything post-Onslaught under the rug, but instead he makes the best of his situation and uses the character’s year-long disappearance from the main universe to the story’s advantage. Upon his return, Captain America must contend with an enemy he’s never faced before: his adoring public.

Idolized by the masses, Cap initially resists and later tries to come to terms with the “Capmania” that’s seemingly overtaken not just the United States, but the entire world. How successful he is at doing that is debatable, to say the least. There’s room for disagreement with Cap’s attitude toward celebrity in this book, an ambiguity that’s given voice at several points by Hawkeye and Thor, and I think that’s what makes this story so interesting: there really isn’t a right or wrong answer as to how he should address the problem, or even (for part of the book, anyway) if there’s really a problem at all.

While most of the book concerns Cap’s ongoing battles with the criminal organization HYDRA, it ends with a Skrull subplot that puts the recent Secret Invasion miniseries to shame. Whereas Marvel took eight issues to tell that story back in 2008 (not counting the nearly one hundred tie-in issues), Waid tells a better one in just two. He resolves it much more definitively, too – by the end, Waid has completely redefined Cap’s purpose and the character’s long-term thematic direction. It’s a shame the series hasn’t been collected past this point, because I’d really like to see Waid continue with this take on the character.

Ron Garney’s artwork is another major contribution to the book’s success. While he’s improved a great deal in the years since, in large part due to the fact that he now inks his own pencils, his style here is a welcome change from the over-rendered linework that had become Marvel’s house style in the 1990s. There’s a poignant scene at the end of the second issue in which Cap loses his one-of-a-kind shield, and Garney does an expert job of conveying the character’s sense of remorse – almost entirely without words, to boot. Even at this point in his career, there’s something about his work I can hardly describe that keeps the story moving forward at a brisk and well-oiled pace.

The last two issues of this collection are drawn by Dale Eaglesham, who some might be familiar with as the current artist on Fantastic Four. His Captain America is more heavily muscled than Garney’s – a little too much for my taste, in fact – but luckily it never reaches anywhere close to Liefeldian proportions. The final issue actually transitions partway through from Eaglesham to Andy Kubert, one of my favorite pencilers (he’s joined by Jesse Delperdang on inks, who would later work with him on Grant Morrison’s Batman). Kubert’s work is strong, but unfortunately there are only a few pages of it. Again, it’s too bad there aren’t any more collections for this series, because I would have loved to see more of his work on the title.

Although it seems to be out of print at the moment, To Serve and Protect is a book I recommend seeking out for anyone interested in Captain America or in exploring the creative seeds of what the Marvel Universe would become in the new millennium. It’s not perfect – the coloring is a little bland at times, and at one point the collection breaks up a two-page spread to fairly disastrous effect. But it’s definitely worth reading, which is more than can be said for a good deal of Marvel’s output over the decade that preceded it, or even in the decade since.