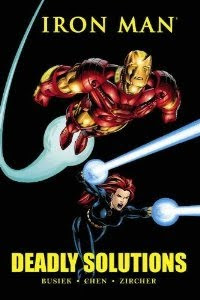 Just as it was for Captain America, the Fantastic Four, and a number of other prominent Marvel heroes, 1998 was a significant year for Iron Man. With the much-maligned Onslaught and Heroes Reborn crossover events now firmly in the past, the character was given a new series, a new writer and artist, and a new thematic direction. Iron Man: Deadly Solutions collects the first seven issues of that creative effort, and the result is, for the most part, a success.

The book is composed of one- and two-issue stories, all of which are fairly self-contained but also contribute to a larger ongoing plot that involves, among other things: a mysterious villain known only as the Arms Merchant; the takeover of Stark Industries by another major tech corporation; and Tony Stark’s seeming return from the dead, now that he has suddenly reappeared after several months spent in an alternate universe. That’s what I like about this era in the Marvel Universe – the feeling that you can read and enjoy any one issue by itself, but that when read together with the rest of the series, it builds towards something more substantial. It’s a nice balance between the “any issue could be someone’s first” mentality and the extreme decompression that would come to characterize many superhero comics just a few years later.

That being said, in some respects Busiek doesn’t make as much of his opportunity for a fresh start as he could have. The series still operates under the ridiculous pretense that the world believes Tony Stark and Iron Man are two different people – a lie that’s been exposed and subsequently explained away more times than I care to count. You would think, with both of them suddenly returning from the dead at the same time, that the world would finally have figured things out this time.

Practical issues aside, I’ve never understood why Tony even bothers maintaining dual identities in the first place. Is it to protect himself from Iron Man’s enemies? Or is it to protect Iron Man and (by association) the Avengers from the constant controversy that surrounds Tony Stark? The first explanation makes even less sense than usual in this particular story, since Tony himself, not Iron Man, is the target of the Arms Merchant’s kidnappers and assassins. The second doesn’t work either, since Iron Man publicly aligns himself with Tony – at one point even going on television to dare Tony’s enemies to come after him – essentially taking on a corporate-lackey image that’s even worse than the one he would have if he were just to tell the truth.

As much fuss as I’ve made of it, though, the secret identity aspect isn’t too detrimental to the story. Busiek makes up for it in other ways, most notably with the strength of the inner conflict Tony experience throughout the story. Whereas later Iron Man comics would depict the character as a man with a plan for every situation, here Tony is shown less as a trailblazer and more as a constant victim of circumstance. He doesn’t act, he reacts, constantly, and the conflicts that result from that always seems to be over what exactly his next move should be.

Busiek also does an excellent job of involving Tony’s traditional supporting cast (Pepper Potts, Happy Hogan, and Black Widow), an important part of the character that even some of the most notable Iron Man writers often ignore. With plenty of character-driven moments sprinkled between the action scenes – a walk on the beach with future girlfriend Rumiko Fujikawa, for instance – it makes for a more well-rounded portrayal of the character than we typically see.

There are few recognizable Iron Man villains in these pages, but that’s okay. The mystery behind the Arms Merchant is compelling enough to sustain interest while Tony fights a host of new villains, all of whom seem to be answering to some unseen higher authority. A particularly interesting new foe is Firebrand, a man apparently transformed into living plasma who uses his power over heat energy to awaken a volcano on a tropical island resort.

Chen’s art shines throughout the book, and while it isn’t quite as stylized as it would become just a few years later in this series and in Wolverine, it’s still very distinctive. Patrick Zircher draws an issue as well and does a capable enough job, although his action sequences are a bit cluttered at times. The colors are done by Liquid!, my favorite coloring group from this time, which gives Iron Man’s armor the perfect metallic sheen.

The final issue collected in Deadly Solutions is the first of a four-part crossover called “Live Kree or Die,” the inclusion of which is sort of puzzling. The other three issues in the story (which took place in the pages of Avengers, Captain America, and Quicksilver) are not collected here, but rather summarized in a one-page text piece at the end of the book. With no less than four editorial notes referring to other series in the first two pages alone, the issue is significantly heavier on continuity than the preceding ones. It’s definitely best read after the initial half of the first Avengers Assemble hardcover, since Ms. Marvel’s actions in Avengers directly precipitate the encounter between her and Iron Man in this issue. (The entirety of “Live Kree or Die” is basically the story of Ms. Marvel’s battle with alcoholism and what it means for her status as an Avenger.)

However, if you’ve read the lead-up issues in Avengers, the final issue of Deadly Solutions actually provides some good payoff for the increasing tension between Ms. Marvel and the rest of the team. And rather than letting itself be totally commandeered by the crossover, the issue drives the plot of Iron Man’s own title forward as well: Tony is still on the trail of the Arms Merchant, and there’s still plenty of drama between him and his supporting cast. Overall, it’s a good beginning to a story arc – but like I said, the fact that the other three parts are missing may be a bit confusing.

Perhaps Marvel intends to eventually reprint the entirety of Iron Man’s third ongoing series from start to finish; that’s the best explanation I can come up with for the story’s inclusion, and if it is the case, it’s probably better to put this issue at the end of the first book than at the very beginning of the second one. Although no more collections of this series have been announced so far, I really hope they continue, since Busiek continued writing the title for another dozen or so issues after this point, and Chen stayed on through issue 30.

With strong characterization, excellent artwork, and an ability to tell complete, satisfying stories within a larger narrative, Iron Man: Deadly Solutions is a fine balance of old and new trends in comic book storytelling. Even despite the few shortcomings I mentioned, it’s a book that I can easily recommend.