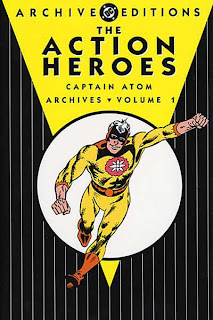 No one knows for sure why Steve Ditko left Marvel in the mid-1960s. It almost certainly had something to do with his negative feelings toward Stan Lee and the direction in which the popular series he co-created, Amazing Spider-Man, was headed – but since Ditko simply quit without giving an explanation to Lee or anyone else, it’s impossible to tell whether there was something more to it, or, if Lee himself was indeed the reason, which straw it was that finally broke the camel’s back. There are two things we do know, however. The first is that his reason for leaving had little to do with money; when he returned to Charlton (one of his first employers), he was making far less than he had been at Marvel. It also certainly wasn’t to make better comics, as The Action Heroes Archives, Vol. 1 shows us.

Now, that isn’t to say that Ditko specifically set out to make bad comics after he left Marvel. What he wanted more than anything else was creative freedom – something he’d never felt he truly had under the aegis of Stan Lee, who at the time was Marvel’s top writer, editor-in-chief, and publisher, all at once. And creative freedom is what Ditko got at Charlton, a company known less for the quality of its comics than for its ability to churn out vast amounts of mediocre product each month. (In fact, Charlton’s comics division was a mere sideshow to their magazine and songbook departments; the company published comics only because it was cheaper to keep the printing presses running than to turn them off and on repeatedly.)

Ditko had worked for Charlton before, at the beginning of the decade, and his first act upon returning was to revive Captain Atom, a character he had co-created for the company in 1960 with writer Joe Gill. The original, Gill-written stories are all reprinted in this first Action Heroes Archives collection; in fact, they comprise more than half of the book. From an artistic standpoint, they’re fairly good – in the issues where he inks his own work, Ditko is at his pre-Marvel peak – although the small page count allotted for each story (usually just five or seven pages) easily puts paid to any attempts at character development whatsoever.

Gill and Ditko give us the bare essentials – namely, an origin story and an alter ego – and not much else. Captain Atom is, in reality, military scientist Captain Adam (clever, right?); his power set is vague, he has no recurring love interest, and no apparent motivation to do good aside from blind patriotism. Most of the stories involve some Soviet threat or another, almost always in the form of deadly nuclear missiles bound straight for the U.S. of A. And I do mean always.

There were a few times, as I approached the end of a story, that I breathed a sigh of relief in the false belief that there would be no missiles this time around, but then – nope, there they were again in the last few pages or panels. Kids reading these stories at the time must have felt incredibly safe knowing that Captain Atom was out there single-handedly destroying the world’s nuclear arsenals at least twice over. There are occasional bright spots, though. One story, in which a little boy’s dreams transport him to a distant galaxy where he rides giant green space-birds, is a fun, space-age homage to Winsor McCay’s Little Nemo in Slumberland. For the most part, however, the comics from before Ditko’s pre-Marvel days just aren’t very impressive.

The real highlight of this book is Ditko’s work from 1965-66, around the time that he left Marvel. Finally free from editorial influence, he really cuts loose with these stories, which are now long enough to support at least some form of character development. Whereas the early stories mainly had Captain Atom fighting communists and the occasional alien invader, the later ones are much more straightforwardly super-heroic. Atom soon gains an archenemy in the form of Dr. Spectro, a mad scientist who uses color and light as his weapons. Later, he teams up with the super-heroine Nightshade in what borders on a full-out espionage story. Their target, a villain called the Ghost, is an unabashed rip-off of Spider-Man and Dr. Strange in the visual department, even if his characterization is quite different from either.

The stories aren’t bad, but they don’t hold the slightest candle to Ditko’s work on Amazing Spider-Man. Most of them are inked by Rocke Mastroserio, whose brushwork actually stifles some of Ditko’s signature charm. But if you’re a Ditko enthusiast like me, then you’ll probably enjoy these comics on some level anyway, just as I did. When you love the work of a particular creator or artist (whether in comics, film, literature, music, or anything else), even their lesser works are interesting in their own way, and that’s certainly the case with the first volume of The Action Heroes Archives. In other words, it’s worth looking into, but only if you’re already a fan of Steve Ditko; otherwise, there’s probably not too much to see here.