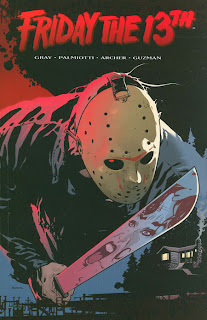 Halloween is one of my favorite horror films of all time, but (as I wrote in a post at my previous blog almost two years ago) it has yet to be equaled, and I doubt it ever will be. That’s because not only was Halloween the first film of its kind, but it was so deftly crafted that even watching it today, it elicits the same reaction as it did the first time – a time when “horror” meant more than simply “blood and gore.” Something about it still hypnotizes and frightens me, despite all of the films that have turned its plot into a stale formula in the years since.

I can’t say the same about the Friday the 13th movies. Even the first one smacked of creative theft, and aside from an admittedly brilliant penultimate scene, there was little to set it apart from the cadre of other Halloween rip-offs glutting the film market in the early 1980s. The original wasn’t scary, or even really suspenseful, for that matter; it was funny, although probably not intentionally so. It spawned even more sequels than Halloween, none of which were remotely scarier or less unoriginal, and by the early 2000s it had descended almost completely into self-parody. One sequel actually has Jason, the mass-murdering, hockey-mask-wearing central character of the series, awaken from a cryogenic freeze to chase astronauts around a space station with his signature machete.

So what, then, inspired me to read this trade paperback collecting Wildstorm’s recent Friday the 13th comic book miniseries? No, it’s not just that today is Friday the 13th (that turned out to be a rather funny coincidence, actually). Despite my negativity towards the franchise in general, the fact is that I’ve always thought it’s a concept that should work – I mean, what exactly about a man in a hockey mask killing people with a machete wouldn’t be terrifying in real life? It’s never really worked on film, but perhaps, I thought, it might fare better in a different medium, especially when written by people as talented as Justin Gray and Jimmy Palmiotti.

Sadly, the comic book version of Friday the 13th didn’t quite meet my expectations. It’s not a total debacle, though – it’s certainly no worse than any of the innumerable sequels, and it’s actually probably better than most of them. Gray and Palmiotti are extremely aware of the world in which their story takes place and all of the baggage that comes with it, which in a way is sort of refreshing. In case you’ve ever wondered just why on earth people keep coming back to Camp Crystal Lake (Jason’s stomping/killing ground) despite the hundreds of unexplained murders that have taken place there, this book offers an explanation, not so much in words as in characterization.

Several characters in the book are familiar with the legend of Jason; a few, in fact, are strangely obsessed with it. They’ve come to Crystal Lake, I would imagine, for the same reason that we ourselves enjoy horror stories – for the thrill that comes with feeling close to death and danger, and with ultimately escaping from it at the story’s end. The difference, of course, is that the characters in this story actually are in danger, and that most of them won’t survive to the end of the book.

The setup is precisely what you would expect: a handful of teenagers are hired to clean up Crystal Lake so the camp can be reopened again, although this time as something of a tourist trap (complete with T-shirts emblazoned with the words “I Survived Camp Crystal Lake”). Come nightfall, however, the characters are running for their lives and being killed off by Jason, one by one. In an interesting twist, it turns out that one of the girls isn’t entirely mentally stable, thus giving us reason to question at times whether Jason has even really returned at all. Unfortunately, this subplot isn’t used quite to its full potential; in the end, actually, it becomes a fairly thin excuse for the character to spend a good portion of the book running around completely naked. It wouldn’t exactly be Friday the 13th without an unhealthy dose of sexual exploitation, I suppose.

Adam Archer’s artwork here is pretty much the definition of “middle of the road.” It gets the job done and he’s decent enough at drawing spurting blood, which I guess is probably how he got the job. Speaking of that, something I’ve always enjoyed in slasher movies (even the bad ones) is the originality of the death scenes. Unfortunately, the kills in Friday the 13th are pretty boring – Jason mostly just stabs people and/or chops their heads off. That’s kind of surprising, considering Palmiotti inked Steve Dillon on Garth Ennis’s Punisher, a book replete with totally bizarre deaths. The ending is a bit less predictable, in that it seems to aim for comedy much more than the rest of the book. Whether the writers were successful in this case is really in the eye of the beholder, but for my money it’s far too over-the-top, even for a Friday the 13th story.

If you’re a big fan of the slasher subgenre or of the Friday the 13th series in particular, then there won’t be much in this book to prevent your enjoying it. It’s better than the movies, but of course that means next to nothing considering how awful the movies really are. I think it should matter, though, and the fact that this book couldn’t raise my already extremely low esteem for the series is what frustrates me about it more than any of its other failings. Perhaps that’s too much to ask of one tie-in comic book miniseries, but still, it makes me wonder: if writers as talented as Gray and Palmiotti can’t turn this franchise around, is there anyone who can?