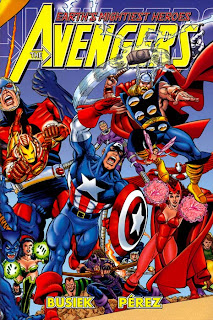 Avengers Assemble, Vol. 1 collects the first eleven issues of the series’ 1998 reboot, which began the same month as the Iron Man reboot and the month after Captain America’s. Writer Kurt Busiek had been working in comics for over a decade at this point, but had really only gained wider recognition in 1994 with the epic miniseries Marvels, illustrated by Alex Ross. Still, he was fairly untested when it came to the ins and outs of writing a major monthly series, and it was on Avengers that he got his first shot. (While it’s true that Busiek was writing Thunderbolts at this time as well, I would argue that it hadn’t yet exploded into the hugely popular series it would later become.)

The other major creative force behind the relaunch was George Pérez, one of the true modern masters of comic book art. Pérez is probably best known for his work on the 1984 DC miniseries Crisis on Infinite Earths, in which he famously rendered almost every single one of the company’s enormous pantheon of characters. Whereas most artists would likely balk at the thought of drawing so many different characters in a single issue, Pérez does so with enthusiasm and aplomb. In Avengers, it’s not at all uncommon for him to cram dozens of characters into as many as twenty panels on one page, and in a way that, amazingly enough, keeps the action flowing smoothly and at breathtaking speed. His artwork is so dense, in fact, that a single page of his can look incredibly daunting when viewed as a whole – but taken piece by piece, each panel becomes a totally comprehensible, self-contained work of art in its own right.

The first three issues see the reformation of the Avengers, who had disbanded while most of the team was trapped in the alternate Heroes Reborn universe. As always, they unite to face a common threat – this time it’s the sorceress Morgan Le Fay, who captures the Scarlet Witch and uses her magic-based powers to remakes reality as a medieval society under her own rule. This gives Pérez the chance to do what he does best, drawing tons of characters and designing brand-new, medieval-themed costumes for each of them. 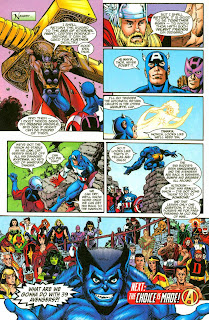 What I like most about this storyline is that it takes something which has always been somewhat of a sticking point between me and the Avengers – the fact that it’s a team whose ranks include an overwhelming number of no-name characters – and it turns that into something fun and almost self-effacing by throwing every single person who’s ever been an Avenger into one big adventure. The emphasis is kept on the most prominent team members (Captain America, Iron Man, and Thor), but even the parts without them are so well-written that despite not knowing anything about characters like Living Lightning or the Swordsman, I felt completely up-to-speed whenever they showed up. It’s a set-up that could never work for the long haul, though, and the third issue ends, fittingly enough, with Morgan Le Fay defeated and the Beast asking the one question that’s sure to be at the front of the reader’s mind: “What are we gonna do with 39 Avengers?”

The team is whittled down to a permanent – and, in the long term, much more manageable – roster in the next issue. The team consists of Captain America, Iron Man, Thor, Hawkeye, the Scarlet Witch, Warbird (Carol Danvers, also known as Ms. Marvel and Binary), reserve members Justice and Firestar of the teenage New Warriors, and the Vision (whose android body has been destroyed, so he exists only as a sentient hologram in the mansion). From the beginning, the character drama takes precedence over the Avengers’ actual exploits as a team, and Busiek executes this side of the story perfectly.

Most of the melodrama revolves around the team’s lesser characters – after all, the “Big Three” each have their own ongoing series already. The most important subplot is the Scarlet Witch’s inner conflict over her sudden ability to resurrect Wonder Man from the dead in times of need. Since the Vision’s thought patterns and personality are actually based on Wonder Man’s, an interesting conflict arises as Wanda develops romantic feelings for the dead Avenger: Vision is alive and in love with her, but he can’t touch her, while Wonder Man is dead and he can. (I think it’s worth mentioning that the Scarlet Witch has incredibly strange taste in men: her first husband was a robot who somehow conceived children with her, and here she’s in love with a dead man made out of pure energy. And then there’s the borderline-incestuous relationship some writers have portrayed between her and Quicksilver, her brother...but let’s not even go there.)

Ms. Marvel (sorry, but I don’t think I’ll ever be able to call her “Warbird”) is a huge source of drama too, at least for the book’s first half. Over the first few issues, it becomes increasingly apparent that something is really wrong with her; the cosmic-oriented powers she possessed as Binary have suddenly stopped working, and she almost always seems to be drinking. This leads into the “Live Kree or Die” crossover discussed in last week’s review of Iron Man: Deadly Solutions. While that book collects only the first issue of that story, Avengers Assemble collects just the last one. This isn’t nearly as detrimental as it might sound, since Busiek does a great job of summarizing what has happened in the other three parts, although reading the fourth part by itself, you still certainly feel as though you’re missing some of the story. There’s more to be said about “Live Kree or Die,” but I’ll save that for my review later this week of Avengers: Supreme Justice, the only trade in which parts two and three have ever been collected. 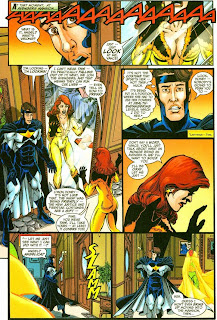 The other intra-team conflicts are fairly conventional, but Busiek pulls them off well. Hawkeye is miffed at no longer being a team leader, paving the way for him to leave the Avengers and take command of the Thunderbolts. Justice and Firestar, who are comparatively younger than the rest of the team, are the obligatory rookies – Justice the overeager one who’s dreamed of being an Avenger his entire life, and Firestar the more reluctant one who isn’t sure whether she even wants to be a superhero at all. They don’t join the cast on a full-time basis until after Ms. Marvel is booted off the team in “Live Kree or Die,” but their presence helps to lessen the occasional sense of erudition which, for better or worse, has come to be associated with the Avengers over the years.

The final issues bring some closure to Wanda’s mysterious ability to resurrect Wonder Man while at the same time telling a story very much like Blackest Night, in a thematic sense at least, only it does so much more succinctly and coherently. I won’t spoil how it ends, but it does bring about some pretty big changes which I look forward to seeing play out in the next volume.

Also included in the first Avengers Assemble collection is the 1998 Avengers/Squadron Supreme Annual, which is co-scripted by Busiek and Len Kaminski. This done-in-one story builds off of the two issues just prior to “Live Kree or Die,” in which the Avengers and the Squadron Supreme duke it out when the Squadron manages (for what must be the hundredth time) to get itself mind-controlled by a totally inconsequential villain. The two teams actually work together in the Annual, which is a welcome change, since by this point I was fairly tired of seeing them fight for no good reason. Aside from Mark Gruenwald’s miniseries in the 1980s and J.M. Straczynski’s reimagining of the team in the 2000s, I’ve never been a big fan of the Squadron, and the average quality to this story didn’t do much to change my mind. The art is by Carlos Pacheco, an excellent artist in his own right who nevertheless pales in comparison to Pérez. Don’t get me wrong, it’s not a bad story at all; it just doesn’t match the same level of excellence as the rest of the book.

Avengers Assemble was originally published as an oversized hardcover, and although it’s out of print now, it’s still pretty easy to find online. On the other hand, if you’d prefer to wait and pay a bit less for it, Marvel is printing a new softcover version in just a few months. The pages won’t be oversized like they are in the hardcover, which is unfortunate, but I’m sure Pérez’s artwork will still look amazing even at standard size. Either way, as the start of what can easily be called the definitive Avengers run of the last two decades, the first volume of Avengers Assemble is a book wholly deserving of a place on your bookshelf.