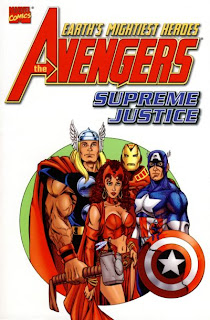 “Live Kree or Die” is a storyline that’s been collected rather confusingly over the years. As a result, I’ve sort of tiptoed around it in my reviews of Avengers Assemble, Vol. 1 and Iron Man: Deadly Solutions, since neither of those books actually include the story in full. As of this writing, Avengers: Supreme Justice is the only book in which the middle two parts of the story, originally published in issues of Captain America and Quicksilver, have been collected.

Before I continue, though, there’s something fairly significant I should mention: I took another look on Amazon this week at the new softcover edition of Avengers Assemble, Vol. 1 coming out at the end of the year, and it appears that unlike the hardcover, it actually will include “Live Kree or Die” in its entirety. Although that makes this review a bit less significant than I originally thought it would be, it doesn’t make it irrelevant in the least. Even with the extra issues in the softcover, the hardcover still has a significant edge, simply for the fact that it has bigger pages. When you’re talking about the artwork of someone as talented as George Pérez, page size would be a huge factor even if the missing issues were of pretty decent quality. As we’ll see a little further along in this review, though, that just isn’t the case here.

The vast majority of what’s collected in Supreme Justice is also collected in Avengers Assemble, although interestingly, the issues are placed in a different (and better) reading order in the former. In Avengers Assemble, the Avengers/Squadron Supreme Annual comes directly after Avengers #5 and #6, the issues in which the team does battle with the Squadron Supreme and tensions begin to rise between Warbird (Carol Danvers, also known as Ms. Marvel) and her teammates.

Since the Annual features the Squadron as well, it’s clear that the book’s editors wanted to group all of the issues featuring those characters together, which I suppose makes sense on some level. But here’s the problem: the Annual takes place after Warbird has left the team and Justice and Firestar have become active members, which means that it must take place after the final part of “Live Kree or Die” in Avengers #7. The Annual doesn’t refer to specific plot points or even mention Carol by name, so it’s not exactly debilitating to the overall story; however, it certainly wouldn’t be unwarranted for someone reading Avengers Assemble to be confused at Warbird’s sudden absence or the appearance of two new team members without any explanation.

Supreme Justice, on the other hand, places the Annual where it belongs, after the events of “Live Kree or Die.” What I find most fascinating here is that this book was actually published before Avengers Assemble; that is, Marvel got the reading order right the first time around but then screwed it up in later collections. As far as the new softcover version of Avengers Assemble goes, it’s impossible to say at this point whether Marvel will reprint the stories in their proper order or not. There’s nothing stopping you from simply reading the issues of the book in any order, of course, so perhaps I’m making a bigger deal of this than I should. Still, it’s a bit annoying to see such a major continuity error in a book which is otherwise quite excellent.

The “Live Kree or Die” crossover begins with Iron Man #7, is also collected in Iron Man: Deadly Solutions. I discussed it a fair amount in my review of that book already, but just to recap, it’s a pretty solid issue, and it does a good job of propelling the plot of Iron Man’s own series forward while still contributing to a larger story involving the rest of the Avengers. The highlight of the issue comes when Iron Man confronts Warbird about her alcoholism, which she tries to explain away throughout a series of flashbacks that give the reader a great understanding of the character’s history, as well as the sense of loss that defines her personality.

When Tony gets into a bit of a sticky situation afterward, Warbird makes things even worse by bursting onto the scene completely drunk. In the process, she inadvertently exposes a splinter cell of Kree extremists, who have resolved to turn the entire human race into fellow members of their own blue-skinned species. Due to her connection to the deceased Captain Marvel (who himself was half-Kree), Carol is for some reason an integral part of the Kree warriors’ plan. As a result they try to lure her into their clutches, which proves none too difficult in her inebriated state.

It’s a rather convoluted set-up, but it gets the job done, I guess. The second part of the story, from Captain America #8, is kind of similar in that it’s just Warbird and one other hero fighting against the Kree. The issue takes place shortly after Captain America: To Serve and Protect, and it deals with some plot threads from that story in a brief scene at the beginning. With art by Andy Kubert, it’s a very good-looking twenty-odd pages. But in the end, the plot is nothing we haven’t already seen, with Captain America standing around looking incredulous while Carol generally acts like a drunken moron. 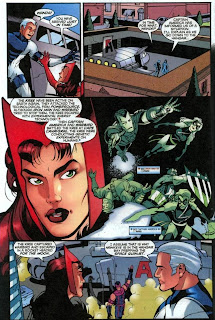 The story continues into Quicksilver #10, which is by all accounts an absolutely terrible comic book. First of all, the fact that Quicksilver ever had an ongoing series of his own is astounding to me, since I’ve never seen him portrayed as anything more than an unlikeable jerk. That aside, the actual script, by John Ostrander and Joe Edkin, is stilted and emotionless (and conspicuously devoid of contractions). See the picture at right for an especially painful moment, in which the Scarlet Witch robotically summarizes what’s been happening in the story so far.

I could go on and on about how awful this issue is, but in the interest of time I’ll give you just one example. There’s a positively ridiculous scene about halfway through in which a weakened Carol comes across a random vat of liquid in the Kree’s secret moon base and, somehow sensing its alcoholic nature, guzzles it down and regains her powers. It makes no sense at all: first, why would the Kree leave a huge, open container of alcohol just lying around? Second, how would Carol even know it was alcohol (or, for that matter, that Kree alcohol wouldn’t be poisonous to a human being)? And third, why would drinking it suddenly give her back the super powers she had lost? Correct me if I’m wrong, but I’m pretty sure that’s now how alcoholism works. Bizarre leaps of logic like this one are just one more reason why this issue rubs me the wrong way.

The final part of “Live Kree or Die,” from Avengers #7, is the only issue from the entire crossover that you actually need to read; the others just give it a bit more context, is all. It summarizes everything as competently as it can (given how ludicrously bad the Quicksilver issue is), neatly wraps up the Kree plot threads, and sees the expulsion of Carol from the team. Unfortunately, it doesn’t feel quite as tragic as it probably should – it’s hard not to want Carol gone after all the stupid things she’s done over the preceding issues.

In short, then, the two issues that are exclusive to Supreme Justice – Captain America #8 and Quicksilver #10 – aren’t at all worth the price of this book, even if you can find it at a significant discount. They’re not a good reason to choose the softcover version of Avengers Assemble either, which I would only recommend if you can’t find the hardcover for a good price. Everything you need to know about “Live Kree or Die” is already present in that book, and it’s not as if it’s a wonderful story (even in concept) anyway. So, to be even shorter this time: just avoid this book.