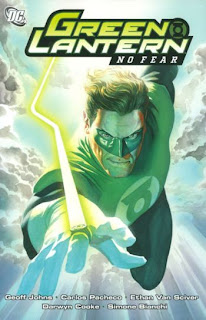 This first volume collecting Green Lantern’s most recent ongoing series, Green Lantern: No Fear, picks up soon after the events of Green Lantern: Rebirth, beginning with a story from the Green Lantern Secret Files and Origins one-shot. Written and drawn by Darwyn Cooke, this issue is by far the best part of the book. It’s essentially a series of flashbacks framed by a present-day sequence in which Hal Jordan begins to forge a friendship with Kyle Rayner, the man who served as Green Lantern in his stead for several years. In the flashbacks, Cooke explores the complex emotional history of Hal’s relationship with long-time love interest Carol Ferris; it’s a really touching story, and the beautiful colors in these scenes evoke some of Tim Sale’s best work (Superman for All Seasons and Spider-Man: Blue, in particular).

Geoff Johns writes the book from this point forward, and he begins by reworking bits and pieces of Hal’s past in a story set firmly in the post-Rebirth universe. Before long, Hal has rejoined the Air Force as a fighter pilot (restoring one of the character’s Silver Age trappings) and begins fighting the Manhunters, a group of robots constructed in the ancient past by the Guardians of the Universe, before they created the Green Lantern Corps. The new plot elements all feel so natural that I didn’t even realize some of them were new until after I had done a bit of research. Carlos Pacheco’s pencils, in combination with the bright, vivid colors of W. Moose Baumann, are effective at capturing Hal’s joy at being back both as Green Lantern and as a pilot.

Johns follows this story with several issues revolving around the classic Green Lantern villains Shark (a mutated tiger shark who can walk on land) and Hector Hammond (a giant-headed telepath with no physical control of his own body). These issues are drawn by Ethan Van Sciver, whose style marks a drastic change from Pacheco’s. He’s certainly a proficient artist, and his talents are put to use just as well here as they were in Rebirth; but to be quite honest, I’m beginning to feel that the way his work is typically colored is just too dark for the Green Lantern franchise. The character has always been more about “brightest day” than “blackest night” for me, which I understand probably puts me somewhat in the minority given the recent success of DC’s Blackest Night crossover. Even with that being the case, there’s still no denying that the artistic differences between the stories by Pacheco and Van Sciver are pretty difficult to reconcile.

No Fear comes to a grinding halt in the final story, an issue penciled and inked by Simone Bianchi. His artwork tends to be either hit or miss for me, often, ironically, within the same comic – in Wolverine: Evolution, for instance, his characters look stunning on one page, and like amorphous blobs on the next. His character renderings are actually fairly consistent here, but the problem is that he doesn’t seem to have any concept of lighting. Characters and objects are often lit from two or three intense light sources in a single panel, and then from two or three entirely different sources in the next. The art is so disorienting, and the characters’ physical actions match the dialogue so rarely, that it actually makes the story itself seem pretty disjointed at times.

Colorist Nathan Eyring is partly to blame as well, as his tendency towards plain white backgrounds gives the issue an incredibly unfinished feel. This change is probably the most jarring aspect of the story, especially in comparison to the rich blues and blacks, respectively, which serve as a backdrop to the Pacheco and Van Sciver issues. It strikes me as I write this that I’ve talked quite a bit about color in this review, more than I think I ever have previously. I suspect that has to do with the fact that the best superhero comics today strive to maintain at least some sense of visual continuity, even if its various parts are drawn by different artists. Captain America, for example, was drawn until about a year ago primarily by Mike Perkins and Steve Epting, and their styles were largely unified by the consistency of Frank D’Armata’s colors. Even New X-Men, with its infamously huge roster of artists, maintained a fairly consistent color palette until the end, when the story and art both took a darker turn.

So when I read a book like Green Lantern – a comic that people consistently praise as one of the best on the market – and it contains such wildly different-looking art from issue to issue, some of it quite bad, I can’t help but stand up and take notice. It just seems to me that a book that garners as much attention and sells as well as it does would have some level of artistic consistency in common with something like Captain America (again, just as an example), a book that does similarly well in terms of sales and critical response. There are other factors that contribute to how people respond to a comic book, of course, but I think it remains an interesting observation.

Aside from its inconsistent visuals and terrible final issue, I found No Fear disappointing in one other respect: it barely addresses the events of Rebirth – aside from that series’ most overt implication for the franchise, of course, which is that Hal Jordan is back in the role of Green Lantern. I understand that Johns wanted to get away from the damage DC had done to the character over the preceding years as quickly as possible, but I’m not sure ignoring the past completely is the best way of accomplishing that. I’m not terribly interested in seeing writers rehash the same one-dimensional characterizations that have been around since the 1950s, and by the end of this book, I feel like Johns is dangerously close to falling into that trap.

First of all, there are plot details like the fighter pilot plot device which, while interesting for a little while, don’t add anything to the story in the long run aside from the nostalgia factor. Much more troubling, though, is Hal’s flat characterization, which similarly hearkens back to the character’s earliest adventures. There’s a point at which having “no fear,” as the book’s title puts it, simply makes a character un-relatable and uninteresting, and too often while reading this book I felt that Hal was simply stoic to the point of arrogance. Johns seems to have used Rebirth as a vehicle not just for resetting the character’s status quo to one more in line with the character’s Silver Age origins, but for imposing on Hal a more simplistic and less dynamic personality – one that gives him the ability to conveniently ignore the moral quandaries which he should by all rights be dealing with in the wake of what’s happened to him.

Johns’ version of Green Lantern isn’t lacking in so much depth that you should necessarily avoid the series – not yet, at least, and I hope the writer doesn’t allow future stories to reach that point. So while the overall package is somewhat of a mixed bag, I think No Fear is still worthy of a mild recommendation, if mostly for the strength of its first half and the excellent Darwyn Cooke issue, which is a definite must-read for any fan of the character.