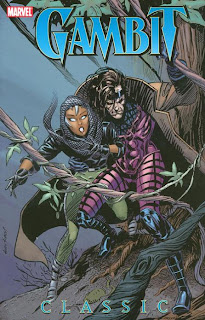 As I’m pretty sure I’ve mentioned before, I think Gambit is an incredibly stupid character. It’s become strangely fashionable lately for comic book creators to claim there are no bad characters in comics, just bad stories – but that’s a lie and everyone knows it, especially if they’ve ever read a comic featuring Gambit in any capacity whatsoever. So why, of all things, do I now find myself reading and reviewing a book called Gambit Classic, Vol. 1? I don’t know, to be honest. Maybe I was hoping to be proven wrong. Or maybe I’m just a glutton for punishment – and punished, I truly was.

The story begins with Storm (who has for some reason regressed mentally and physically to childhood) robbing criminals in Cairo, Illinois. Since the character originally hails from Cairo, Egypt, I guess this is supposed to be ironic or something. I’ve never found Storm particularly interesting as a solo character, and the amnesiac child angle in these issues is exceptionally boring. The story is written by Chris Claremont, who has always seemed to think (incorrectly, most of the time) that he excels at writing strong female lead characters. He also has an unfortunate tendency to reuse certain villains to the point that they’re no longer the least bit menacing – in this case, Nanny and the Orphan-Maker, two characters who are about as dumb as you might guess based on their names.

At this point, you may be wondering: where exactly does Gambit fit into all of this? The short answer is that he doesn’t, really. He just happens to show up as Storm is getting a beat-down courtesy of the minions of the Shadow King (another incredibly lame character), and he helps her escape. He doesn’t speak too much, other than to exert his “Cajun charm” to try and persuade the Shadow King and his mind-slaves to let him and Storm go. Aside from that, he mostly just chain-smokes and occasionally blows things up. At the end of the third issue, he and Storm (who is no longer amnesiac, but still a child) head off to join the X-Men.

Now, here’s where Gambit Classic becomes really frustrating. Instead of reprinting the issues where Gambit becomes a member of the X-Men and we actually get to know something about his character, there’s a page of text explaining his activities over the next few years before the book skips ahead to the four-issue Gambit miniseries from 1993. I suspect the reason that his appearances in X-Men and Uncanny X-Men were omitted is that many of them have been reprinted elsewhere (namely, in the out-of-print trade paperback X-Men Visionaries: Jim Lee), whereas the ones with amnesiac-child Storm have not. But while I understand Marvel’s desire not to collect the same material a hundred times over, this book is still the first volume in a series called “Gambit Classic.” To my mind, that means it should collect the character’s early appearances rather than being some sort of career-spanning “greatest hits” compilation.

This leads me to the same fundamental problem I had with Deadpool Classic, Vol. 1. In both that book and this one, so many of the character’s early issues are omitted that I felt out-of-the-loop by the time I got to the later stories. That’s an even bigger problem with Gambit Classic, since the 1993 miniseries is basically a sequel to a crossover story that took place in two issues of X-Men and another two issues of Ghost Rider – none of which, of course, are collected here. (Interestingly, those issues were collected in a trade called X-Men & Ghost Rider: Brood Trouble in the Big Easy – a book which has been out of print for nearly twenty years.)

Even if those issues had been included, though, I doubt they could have salvaged my lack of enjoyment for the miniseries. The story is so mundane, it’s barely even worth summarizing; all you really need to know is that the Assassins’ Guild and the Thieves’ Guild are at war in New Orleans, and Gambit is the cause of it (sort of). The Thieves’ Guild apparently has some deal with a perpetually half-naked immortal French woman named Candra, who supplies them with an elixir each year that gives them longer life. But now the Assassins want the elixir, and so does Gambit, and so do some other people, etc. – you get the picture.

The story isn’t so much bad as it is astoundingly boring. I suppose that’s sort of a compliment when you’re talking about anything written by Howard Mackie, but I’d like to think my taste in comics is exponentially better than even Mackie’s least offensive work. The miniseries’ only (slightly) redeeming quality is that it’s drawn by Lee Weeks, an artist whose work I normally like very much. Even that doesn’t save it from mediocrity, though, since Weeks’ art is only occasionally good in this series; most of the time, it’s mired in over-the-top, vein-popping ’90s ridiculousness.

It’s worth noting that even by 1993, it’s clear that no one really has any idea of how to write Gambit. Half the time he sounds like he’s auditioning for Hamlet, and the rest of the time like he has some sort of speech impediment; the animated X-Men show was the only time I think anyone has ever gotten his accent quite right. It’s also fairly obvious that Gambit’s “mysterious” past is just a cover for the fact that the writers have no idea where he came from or what to do with him. Readers at the time were apparently eating him up, though, so I guess it’s hard to blame them for trying to capitalize on that.

In short, don’t be like me – don’t read this book, for any reason. I can’t even think of a single nice thing to say about it, honestly. I just hope that Marvel never releases a second volume, if only because of the remote chance that my curiosity may get the better of me again.