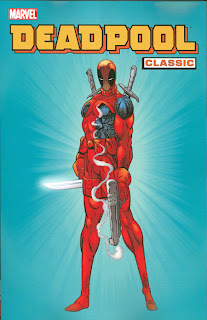 Writers: Fabian Nicieza, Rob Liefeld, Mark Waid, Joe Kelly
Artists: Rob Liefeld, Joe Madureira, Ian Churchill, Lee Weeks, Ken Lashley, Ed McGuinness
Collects: New Mutants #98, Deadpool: The Circle Chase #1-4, Deadpool (1994) #1-4, Deadpool (1997) #1
Published: Marvel, 2008; $29.99
For whatever reason, Deadpool has come pretty much out of nowhere over the last few years to become one of Marvel’s biggest-selling characters. He’s always had a devoted following, to be sure, but the current Deadpool craze is fairly unprecedented, with the character currently appearing in almost as many comics per month as the likes of Spider-Man and Wolverine. I’m not sure yet where I weigh in on the matter – I find the character interesting, although perhaps not enough to read him in half a dozen comics every month – but either way, in light of Deadpool’s current popularity it seems only fitting to take a look back at where it all began, which is what Marvel’s Deadpool Classic trade series has set out to do.

Deadpool Classic, Vol. 1 begins, fittingly enough, with the character’s first appearance in New Mutants #98 (first published February 1991). As with most things written and/or drawn by Rob Liefeld, to call this issue “subpar” would be a tremendous compliment. Deadpool, in this first incarnation, is vintage Liefeld – a completely unremarkable character with big guns and a whole mess of bulky, impractical “gear” who briefly shows up to attack Cable and his mutant protégés. His role isn’t significant to the series’ ongoing plot at all, but rather a means of biding time while Liefeld and scripter Fabian Nicieza develop a boring subplot featuring Gideon (another Liefeld creation which, along with most of what happened at Marvel in the early 1990s, is best forgotten).

The book jumps a few years ahead from this point to Deadpool: The Circle Chase, a four-issue miniseries from 1993 which revolves around a number of criminals all on a hunt for the will of Mr. Tolliver (an illegal weapons merchant, actually Cable’s son in disguise, who was for some reason or another assumed dead at this point). At times it reads sort of like a “who’s who” of the characters in Marvel’s early-‘90s D-list, which isn’t a plus considering I wasn’t particularly fond of the direction in which even the A-listers were headed at the time. This isn’t helped by the presence of Juggernaut and Black Tom, a duo that quite frankly bores me to tears and who I don’t think I’ve ever been able to take completely seriously.

But unlike in his initial appearance, Deadpool finally starts to show some personality in The Circle Chase, and for that alone I don’t think the series is a total wash. Although he acts like a jerk for most of the time, we’re treated at the end, in his interactions with ex-girlfriend Copycat, to a rare glimpse at the character’s compassionate side. Add to that a fairly competent job on the artwork (for the ‘90s, at least) by Joe Madureira, and I’d rate The Circle Chase as being slightly above average overall, although just barely.

It’s followed in this collection by another Deadpool miniseries from 1994 (called just Deadpool this time, although it was retroactively subtitled Sins of the Past when it was collected in 1997), written by Mark Waid and drawn mostly by Ian Churchill. Juggernaut and Black Tom rear their ugly heads again, unfortunately, but for whatever reason I didn’t mind them as much in this story. Perhaps it’s because Waid is a much better writer than Fabian Nicieza, who wrote both New Mutants #98 and The Circle Chase, but I think it’s also because the second series’ main emphasis is on the ongoing relationship between Deadpool and Siryn (member of X-Force, daughter of Banshee, and niece of Black Tom). Deadpool is infatuated with her from the moment they meet, and Waid creates legitimate tension between them as she first resists his advances and later begins to warm up to him.

Churchill’s art is characterized by his penchant for drawing far more lines than could ever be considered practical, but surprisingly enough, I enjoyed it in this series. Linework aside, his figures are well-proportioned (other than Juggernaut, obviously, who looks just as massively over-the-top as he should) and he does some interesting things in terms of panel composition. Lee Weeks does a nice-looking flashback sequence in the second issue, and Ken Lashley takes over for Churchill for a few pages in issues three and four. In the latter, curiously, Lashley draws five pages right in the middle of an action sequence – these are some of the only pages in the series to show Deadpool unmasked, and my guess is that someone in editorial felt Churchill’s version of Deadpool’s face (seen briefly in the first issue) was a bit too grotesque to be revisited. I’m curious as to whether Churchill ever drew these pages before it was decided that Lashley would do the final versions; if so, I think they would be really interesting to see.

Deadpool made a number of appearances in the pages of X-Force before and after his two miniseries, none of which are collected here. I’m not sure whether that’s a good or bad thing – I’ve never read them, and I suspect they weren’t very good – but a page or two explaining the events that take place in those issues would have been appreciated. As it is, I’m left slightly confused by the collection’s final story, the premiere issue of Deadpool’s first ongoing series from 1997. Published three years after the Mark Waid miniseries, it makes vague references to developments in the Deadpool/Siryn relationship that took place during the time between – something I would have preferred to read about rather than the issue’s actual story, which involves Deadpool fighting Sasquatch in the wastes of Antarctica. It’s not bad, I guess, but it’s obvious that Marvel only included it in this collection to entice readers to buy the second volume of Deadpool Classic, which continues with the second issue of Deadpool’s ongoing series.

Although there are some good stories in this book, the disparity of quality throughout, as well as the exclusion of a number of stories that probably should have been included (or at least explained), makes it difficult for me to recommend it wholeheartedly at the price Marvel is asking. Ideally, the first volume in a series called “Deadpool Classic” would bring readers totally up to speed on the character’s early history, but instead it leaves bothersome gaps that readers will have to fill by other means (either by tracking down the issues or waiting to see if they’ll be collected separately) to get the full picture. If you’re a fan of Deadpool and you really want to see how he got his start, then give this a shot, I suppose – just don’t expect the same level of polish the character’s numerous titles receive today.