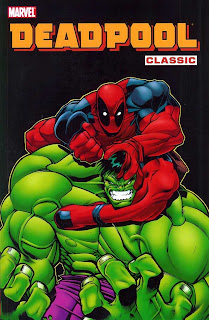 Now this is more like it. While the first trade in the Deadpool Classic series was an odd hodgepodge of some of the title character’s earliest appearances, the second one, thankfully, is a much more cohesive package. It begins where the first volume left off, with the second issue of Deadpool’s 1997 ongoing series – and while I still think not including the first issue in this book is a cheap ploy on Marvel’s part to sucker readers into spending more money on these trades than they reasonably should, it’s hard to fault the actual stories for what’s clearly a boneheaded decision on Marvel’s part.

The issues collected in Deadpool Classic, Vol. 2 are all written by Joe Kelly, whose Deadpool run I had heard a great deal about but never encountered personally until I read this book. Many people consider his work with the character to be better than anyone else’s by far, and even having only read these early issues, I’m inclined to agree. Tonally, Kelly strikes the perfect chord: Deadpool’s dialogue and the situations he finds himself in are often funny, but at the same time Kelly presents the character (and the reader) with moral dilemmas that one simply won’t find in the majority of superhero comics. My favorite moments in this book came when Deadpool’s sense of humor fell completely away and we were able to see something of the man behind the mask – a deeply disturbed man whose actions and worldview heart-wrenchingly reveal to us the real depths of human existence.

In the book’s first story arc, we learn from Killbrew, the scientist who essentially “created” Deadpool (and who I could have sworn was referred to as “Killebrew” in the first trade), that Deadpool is dying. The search for a cure leads our main character to team up with on-again/off-again love interest Siryn, come face-to-face for the first time with future rivals T-Ray and Taskmaster, tear things up in a surprisingly brutal fight with the Hulk, and even work reluctantly with Killbrew, the one man he despises above all else. Seeing as Deadpool is still around today, it shouldn’t come as much of a surprise that he doesn’t actually die in this story, although Kelly does take the opportunity to permanently weaken the character – in the years since his initial appearance, he had grown to be ridiculously powerful and virtually un-killable.

Rather than a life-and-death struggle, then, Deadpool is faced with one of those poignant existential dilemmas I mentioned above: does Killbrew really deserve to die, and even if he does, is Deadpool the man who should kill him? Siryn, acting as the proverbial angel on his shoulder, doesn’t think so – but then again, can she ever truly understand someone like Deadpool? The ending to this story is one of the best endings I’ve read in a superhero comic in quite a while, as it really makes the reader think about who the main character is and why he does the things he does. It also sets the record straight (well, straighter) on Deadpool’s relationship with Siryn, who quickly grew on me as a character over the course of these issues. She doesn’t feature much in the trade’s second half, unfortunately, but I definitely hope to see more of her in future volumes.

The first story arc is followed by a “Minus One” issue starring Zoe Culloden, a woman last seen at the end of the first Deadpool Classic trade, who has been monitoring the mercenary Wade Wilson as a potential recruit for some sort of mysterious program. The story takes place long before Wade ever became Deadpool, and in fact we barely even see him at all; Kelly focuses instead on the character’s then-girlfriend, who Zoe befriends in an effort to learn more about him. It’s an adequate story, and I’m sure its events will play an important role as the series goes on, but its serious tone feels a little removed from the quirky nature of most of the rest of the book.

The book’s second big story arc has Deadpool taking on two new jobs: one being to break a woman out of a mental asylum, and the other being to kill her. Making things even more confusing, the two jobs were ordered by the same person – the mental patient herself, who turns out to be Typhoid Mary. All of this leads directly into the extra-sized Daredevil/Deadpool Annual 1997, which ends up being little more than an excuse to throw those two characters into the same comic while retconning some details from Frank Miller’s Man Without Fear miniseries, in order to tie the origins of Daredevil and Typhoid Mary more closely together.

I wasn’t too hot on these issues, to be honest. It’s not that they’re poorly written or anything, they just didn’t draw me in like the first few issues did. Typhoid Mary just isn’t one of my favorite villains – I’m much more interested in characters like Magneto and Dr. Doom, who are often misguided but firmly believe that their actions will ultimately benefit the world in some way. Straightforward psychopaths like Mary (and, to a lesser extent, Bullseye) who simply kill people for the sake of killing just aren’t as compelling to me, since there’s no bigger moral, social, or political issue at stake in their actions.

But while the final part of Deadpool Classic, Vol. 2 isn’t much to write home about, the trade’s strong first half more than makes up for it. In fact, I’d go so far as to say that the story that begins in the final issue of the first Deadpool Classic trade and continues into the first four issues of this collection is one of the best Deadpool stories I’ve ever read. If you even think you might be a Deadpool fan, this is a book well worth reading.