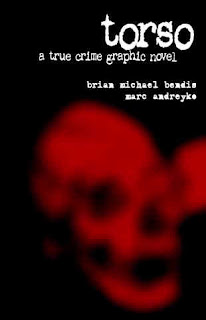 Torso is a book I’ve wanted to read for a long time. It seemed like a perfect fit for me since I find a lot of Brian Michael Bendis’s early work pretty enjoyable, and since the story is tangentially related to one of my favorite movies, Brian De Palma’s The Untouchables. The movie follows federal agent Eliot Ness (played by Kevin Costner) in his efforts to bring down the notorious Chicago gangster Al Capone, and ends with Capone being convicted of tax evasion, the only charge Ness and his team could get to stick. Torso is based on the actual story of what Ness did afterward, which was to take over as Safety Director for the city of Cleveland. Before long, though, the city is struck by a series of bizarre murders committed by a serial killer known as the “Torso Killer.”

The real-life story here is pretty fascinating, and it’s clear that Bendis and co-writer Marc Andreyko did a lot of research for the book. Unfortunately, an interesting concept and solid research don’t necessarily make for good writing or artwork, neither of which are to be found with any consistency in Torso. The story follows not just Ness, but two detectives who have been assigned to the Torso Killer case. None of the characters are very easy to sympathize with – the detectives are interchangeable and bland, and Ness comes off most of the time as little more than an arrogant jerk. The writing is pure Bendis, and if you’re at all familiar with his recent work then you know exactly what I mean: the book is full of ridiculously talkative characters who ask and answer far too many rhetorical questions in as choppy and stilted a fashion as humanly possible.

But what kills the book more than anything else is the art, which is quite possibly the laziest I have ever seen in a comic book. Each character has no more than five different facial expressions, which Bendis simply copies and pastes for every single panel, changing their sizes and their positions in relation to each other as the situation warrants. Think of it like trying to tell a story with an industrial-sized box of the same five stickers. Perhaps in an effort to make the book “dark and gritty,” almost every expression in Bendis’s limited repertoire is heavily shadowed, even when the characters appear in settings that should be considerably brighter. For scenes in which something other than an extreme close-up is needed, the characters usually appear simply in silhouette. It’s worth noting too that text at the beginning of each of the book’s six chapters claims that Torso was “created and written” by Bendis and Andreyko, and “executed” by Bendis. I’m not sure if that’s supposed to be a pun; if it is, I’m not laughing.

If the book were only 30 or 50 pages, I probably wouldn’t have minded the repetition in the art so much – but at nearly 300 pages, I was sick of even looking at Torso about a third of the way into it. In fact, I think it was around that point that I realized I would rather have just read the actual script than the comic itself. It’s not just that the art is boring; it’s that it actively works against the story. The ending in particular is an incomprehensible mess, due mostly to the fact that everything and everyone in the last few pages looks exactly the same. I honestly have no idea what happens in the final scenes, although I’ve determined that it involves multiple decapitations (with one character somehow being decapitated twice, as far as I can tell) and at least one character being alive for some reason after having died in a fire just minutes earlier. Does that sound confusing? It should, because it doesn’t make any sense whatsoever. In fact, in the process of writing it down I very well may have actually made it sound more coherent than it really is.

As I’ve already mentioned, the true story that Torso is based on is undoubtedly an interesting one. Don’t let that fool you into reading this disappointing comic, though – it will only frustrate you and leave you with more questions than you had before you started. If you’re really that interested in the subject matter, picking up a history book seems to me like it would be a much better bet.