Review: The EC Archives: Tales From the Crypt, Vol. 1 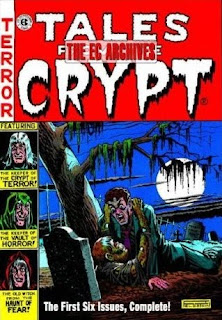 Hard as it may be to believe today, there was a time in comic book history when horror reigned supreme. That time was the first half of the 1950s, when EC Comics publisher Bill Gaines and his top editor, Al Feldstein, set out to create a completely different kind of comic. With what was surely the most talented stable of artists working in the comics industry, and with almost every story written by Feldstein (with Gaines’s frequent input), EC’s bimonthly horror anthology Tales From the Crypt quickly became one of the best and most consistently beautiful-looking comics being published at the time. This first volume in Gemstone’s series of Tales from the Crypt archives collects the comic’s first six issues, which contain some of the greatest and most influential horror stories ever conceived.

The history of EC Comics is so intertwined with the actual content of its comic books that it’s worth dwelling on, at least for a moment more. Gaines was more than just an idea man; he was also a shrewd businessman. He inherited the company (then called Educational Comics) from his father, who had published a range of wholesome, but utterly bland, comic books, including Picture Stories from the Bible. Within three years of his father’s death, Gaines had transformed the newly-christened “Entertaining Comics” – EC, for short – into something altogether different, not to mention exponentially more successful. Originally called The Crypt of Terror, the company’s flagship title (along with Weird Science, a science-fiction comic) began with issue 17, inheriting its numbering from another EC title, Crime Patrol. At the time, it would have cost an additional fee to start a new comic magazine with a new first issue, although ironically, the U.S. Post Office grew wise to EC’s scheme and made the company pay the fee anyway. With its fourth issue, the series changed its name again, this time to Tales From the Crypt, the title it would retain until its untimely end in 1955.

Each issue contains four stories, which are typically six to eight pages in length apiece. The first story (and sometimes the second) is narrated by the Crypt Keeper, who basically acts as the comic’s “host.” The Crypt Keeper is a creepy old man whose exaggerated dialogue is filled with morbid puns that are so ridiculously campy it’s hard not to chuckle along with him. The actual stories take themselves a bit more seriously. What’s really interesting is that, at least in the early issues, the stories rarely delve into supernatural territory. While some of the characters do seem to encounter ghosts and werewolves and what not, the strange things they see are usually explained as being the manifestations of their inner guilt rather than actual paranormal activity.

This has a great deal to do with one of the defining traits not just of Tales From the Crypt, but of EC’s comic book line in general. In fact, a better way of describing the company’s comics, rather than calling them horror or science-fiction comics, might be to call them morality tale anthologies with a horror or science-fiction twist. Most stories, in the end, involve the meting out of karmic justice, while even those that don’t still achieve their rhetorical effect from the very absence of that justice. Each story also ends with a twist of some kind. Sometimes the twists are obvious and can be seen a mile away; other times, they come totally out of left field. Even in the former case, though, the stories for the most part end satisfyingly and leave you excited for the next one.

So exactly what kinds of stories can you expect to see in this volume? First of all, there are graves and dead bodies – lots of them. In “The Hungry Grave,” for example, a case of mistaken identity leads a man to bury his mistress alive, rather than her husband; in another story, a graveyard prank by a group of rich, spoiled, and bored students leads to tragedy. And then there’s the excellent “The Thing from the Grave” – the ending, in which a dead man seemingly pulls his killer with him into the grave, is pictured on this collection’s cover.

In several stories, men kill their closest friends in order to steal their wives, only to meet horrible and fitting ends themselves. Others are more unique – in “Terror Ride,” a couple of newlyweds find themselves on a death-filled Tunnel of Love ride. That’s not the only story to feature an amusement park, either; in “Death’s Turn,” two greedy amusement park owners cut corners while building the fastest roller coaster ever, leading to predictably ghastly results. Many of the stories reach backward in time to play on common folklore and urban legend, while others lay the groundwork for horror classics that would come many years later. One of my favorite stories in the book, “The Maestro’s Hand,” anticipates Sam Raimi’s brilliant Evil Dead 2 (one of my favorite horror movies) in its depiction of a disembodied hand that skitters about almost comically before achieving its chilling, murderous end.

There is one major problem with this collection, one that, admittedly, may not bother other people as much as it bothers me – every story in this collection has been re-colored using modern technology. In general, the argument for re-coloring older comics is that the original creators simply weren’t able to produce the range and quality of colors they wanted due to technical or budgetary limitations at the time. On the final page of this collection, Gemstone publisher Russ Cochran tries to justify the re-coloring process by arguing that coloring in comic books prior to 1950 was primitive and generally handled by non-artists. The problem with this argument, though, is that Tales From the Crypt was published after 1950, and was in fact colored by Marie Severin, one of the single best colorists in the industry’s history. The new coloring does a huge disservice to the original artists, whose beautiful linework looks strange and unnatural at times in this book.

Another minor complaint is that this book is interspersed with advertisements for other books published by Gemstone, including other EC Archive editions. This comes off as a pretty tacky move, especially for a book that costs as much as this one does. I find it unlikely that most people who buy this book would be unaware that other EC Archives exist, and even in that case, it’s not a problem that a one-page list of other Archives at the end of the book wouldn’t solve.

While the presentation isn’t ideal, the fact still remains that this is the only way to see these stories in print without buying the original issues, which can be quite expensive these days. Perhaps one day another company will gain access to this material and present it in a better format – I certainly hope so. But until then, if you’re a fan of horror stories or even of great storytelling in general, this collection of Tales From the Crypt is, even despite its flaws, a must-read.