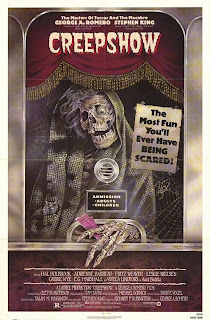 I thought I would do something a little different this week and talk about a film that doesn’t typically come up on lists of great comic book movies, but which deserves the attention of comic fans nonetheless. I imagine the reason that Creepshow is so often overlooked is that it isn’t an adaptation of a specific comic book, but rather an homage to EC’s line of horror comics from the 1950s. As a huge fan of EC Comics myself, I found a lot to love in this movie.

The movie begins with a father scolding his son for reading a horror comic book called Creepshow, and then throwing it in the trash. A thunderstorm is approaching, and as the wind and rain pick up, blowing the comic open, we get our first look into its pages. Much like Tales From the Crypt, it’s a horror anthology hosted by a strange, supernatural character – the Creepshow Creep in this case, rather than the Crypt-Keeper – with all the trappings of a classic EC comic (even the letters pages look the same!). From this point onward, the movie itself follows the same format, presenting the viewer with five distinct, unrelated horror tales.

The stories are vintage EC for the most part, featuring off-kilter characters and shocking, yet satisfying, endings. The violence and language are considerably rougher than anything EC ever published, of course, but the overall tone is the same in its subtle mix of horror and comedy. The screenplay is by Stephen King, who had already made a name for himself despite having published only seven novels at this point (he had written several others as well, but under pseudonyms). He based several of the stories on short fiction of his own, while others were written specifically for the movie. King even appears in a starring role in one segment, playing a farmer who is transformed into a plant-like creature by a radioactive meteor.

It’s hard to describe the stories without giving too much away, but I’ll give it my best shot. The first segment, “Father’s Day,” follows a group of rich, snobbish people as they gather for their annual celebration of the murder that resulted in their inheritance; it also features an early performance by Ed Harris. The second story (mentioned above) stars Stephen King, who plays the part of an over-the-top southern hick surprisingly well. The next segment, “Something to Tide You Over,” stars Leslie Nielsen as a psychotic husband who sets out to revenge himself upon his wife and her lover by burying them up to their necks on the beach just before the tide comes in. By far the best story, in my opinion, is “The Crate,” in which a college professor (played by Hal Holbrook) uses the appearance of a mysterious monster as a means of getting rid of his emotionally abusive, alcoholic wife. This is followed by the weakest (and also definitely the most disgusting) story of the group, “They’re Creeping Up On You,” in which an evil man receives his just desserts when swarms of insects invade his apartment.

Between each story, we’re treated to bits of the comic book’s artwork as well as brief glimpses of the Creep himself, who is rendered in smooth-looking, traditional animation. The comic book pages are really quite beautiful, and I often found myself pausing the movie to take a closer look or to read some of the text and word balloons that I would have missed otherwise. In a nice touch, the art is by Jack Kamen, one of EC’s top illustrators.

The special effects in Creepshow, created by Tom Savini, are quite good for the time the movie was made. The way the undead are depicted here shows a remarkable technical improvement over Savini’s efforts in the 1975 horror classic Dawn of the Dead – not that there’s anything wrong with the zombies in that movie, but they simply weren’t as impressive in their individual goriness as the dead are in this movie. (In fact, it seems to me that it was only in the decade after Dawn of the Dead that the cinematic portrayal of zombies began to shift from pale, vacant-eyed, but otherwise fairly normal-looking people, to the sort of brain-munching, maggot-filled corpses we’re used to seeing today.) Even the less believable aspects of Creepshow, like the monster in “The Crate,” simply lend to the movie’s horror-comedy tone with how hokey they look.

Of course, the true responsibility for Creepshow’s success lies with director George A. Romero. In fact, the reason I was enticed to watch this movie recently is that I’ve been catching up on some of the director’s movies that I hadn’t already seen (others I’ve watched in the past few weeks include The Crazies, Dawn of the Dead, and Day of the Dead). I’ve found it interesting to watch Romero refine his directorial skills over the course of these films, and I would certainly place Creepshow among his best work.

If you’re interested in EC Comics but don’t have the disposable income to spend on the original issues or on Gemstone’s EC Archive collections, Creepshow is a pretty good way to sample just what it was like to read an EC horror comic book. The Tales From the Crypt television series is excellent as well, since most of the stories on that show were taken directly from the comics, although obviously the anthology format is lost. Interestingly, Wikipedia tells me that a 64-page graphic novella version of Creepshow was published around the time the movie came out. I haven’t been able to procure a copy yet, but I’ll certainly be on the lookout for one, and I’ll let you know what I think of it when I get the chance.