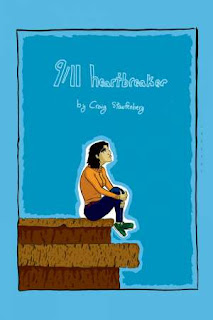 I think September 11 meant something different to my generation than it did to others. That isn’t to say that how some people feel about it is more valid, or more consequential, than what anyone else feels – just that, among the different ways it affected people, many of those differences seem to play themselves out along generational boundaries. Looking back, I often feel like I’m in the peculiar position of being one of the youngest people to remember – to really remember, I mean, with some burgeoning sense of maturity and of how the world really works – the difference between what it was like before and after that day.

Everyone has their own story, their own memories, about September 11. For me, it was the year before I started high school. My history class watched in horror as the second plane hit on live television. We were afraid – not for our own safety, as some of the younger students were, but because I think a part of us knew there was no going back. We were getting older, and had all but left our childhoods behind. The past had been slipping away from us for years, but we didn’t realize it until a huge piece of it was literally destroyed before our eyes on TV.

It may sound self-centered to frame national tragedy in terms of the everyday, adolescent struggle of coming to grips with the world. But in the end, I think that’s exactly how it affected a lot of people; after all, we were young, and we were self-centered, and that’s how young, self-centered people tend to think. Perhaps ours was a special case, too – we grew up believing that our world was one kind of place, and in an instant it forever became an entirely different one. It was the ultimate bait-and-switch. For many people my age, September 11 was an “end-of-the-innocence,” “coming-of-age” experience.

What I’ve just discussed is my own truth, and it’s different from my father’s and my grandfather’s truths, even though it lies rooted in the same factual events. Our sense of understanding is subjective like that, and so is memory. So perhaps it’s fitting, then, that Craig Staufenberg, author of the original graphic novel 9/11 Heartbreaker, titles his personal website “Memory is Fiction.” And perhaps it’s also fitting that Staufenberg, who began the book as a means of exploring our generation’s memories and feelings about September 11, has created one of the most poignant and thought-provoking reactions to the events of that day that I’ve had the pleasure of encountering in any form of media.

At just 28 pages, 9/11 Heartbreaker is a fairly short book. But it’s packed with meaning, and with an entire generation’s own subjective truth. For people like me who were around high-school age at the time of September 11, it will ring perfectly true; for those who weren’t, I imagine it will offer a fascinating alternative perspective on that day.

The story follows a young woman who in the first few pages meets Peter, a man who records young people’s memories of September 11. The stories our unnamed main character encounters through Peter’s website (which were culled from real-life stories collected by Staufenberg) are so gripping that they incite her to action. Realizing how important it is to remember our history – the various subjective truths of everyday people, if you will – she set out to record them in her own way, just as Peter has.

There’s no plot twist, no loopy postmodern narrative techniques; it’s all about the mental journey the main character goes through as a result of hearing these stories about an event which, until now, she hadn’t thought of so intensely. The artwork is fairly uncomplicated, and it brings to mind the simple beauty of artists like graphic novelist Danica Novgorodoff (Slow Storm and Refresh, Refresh). The story is more heavily driven by its prose – as it should be, since much of the book is made up of personal testimonies about September 11.

What I like most about 9/11 Heartbreaker is that it works not just as a means of preserving one specific perspective on one isolated event; it also shows us how we might learn from it, and more generally how we might strive to record and remember the things that are important to us. We can do that in any number of ways, from taking pictures to writing down our thoughts about the world to simply learning about our cultural heritage. After all, if something happened that no one remembers, then in a way isn’t it almost like that thing never happened at all?

In many ways, I feel as though the effects spiraling out from the main character’s meeting with Peter run parallel to the effect this book had on me. Much like her, I hadn’t given much thought prior to reading the book to the unique effect September 11 had on people of my own age group. Maybe five or ten years from now, I’ll look back on some of the conclusions I’ve drawn here and scoff at my own ignorance for thinking that I’ve sort of figured things out. But if I’ve taken anything away from this book, it’s that the very act of recording your thoughts is an important process, and perhaps looking back on these ones again will lead me to reach even more definitive conclusions one day when the time comes.

I think that’s what this book is about, in the end: the importance of being able to accept our own subjective truths as well as those of others, and of doing our best to preserve them. Those truths can be about September 11, a first love, even our own reflections on a book that makes us think about our world in a new way. If memory is indeed fiction, then it’s important for us to try to remember as much as we can, as best we can, in order for us to learn and move forward from those memories. As long as we keep doing that, I don’t think we can ever truly forget about the things that are most important to us.

[9/11 Heartbreaker is available for purchase in either print or digital form. For the time being, people who order the print version can receive a digital version for free by contacting Craig Staufenberg personally. For more information on the book, including other reviews and interviews, feel free to visit his website, Memory is Fiction.]
Posted by Marc at 2:30 PM