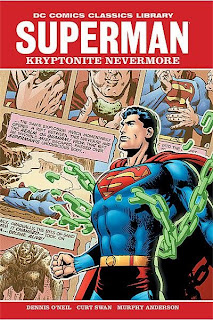 The year was 1971, and things at DC Comics were changing. Longtime Superman editor Mort Weisinger had retired and been replaced by Julius Schwartz, the man who had revamped Batman, Green Lantern, and the Flash, among other characters, for a new, more modern age. What Schwartz found upon taking up his new position was that Superman had somehow resisted the changes that the rest of the comic book industry had undergone over the previous decade. While other superheroes (Batman, especially) had all but completely shed the sillier, less realistic trappings of the Silver Age, Superman was still flying around with an entourage of Super-Pets and coming up against every color of Kryptonite in the rainbow – each of which seemed to possess some increasingly ridiculous physical property and/or influence over Superman.

To top it off, Superman had become so ridiculously overpowered by this point that, as writer Dennis O’Neil once put it, he “could destroy a galaxy by listening hard.” That being the case, it only makes sense that writers were coming up with so many different kinds of Kryptonite; it was the only thing that could pose an actual threat to Superman anymore. Kryptonite had become a story-telling crutch, the only means by which writers could inject Superman’s comics with any real sense of conflict. 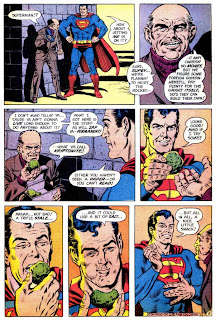 Schwartz brought on O’Neil as the new writer of Superman, and the two came up with a solution that was fairly radical for the time: get rid of Kryptonite altogether. Fittingly enough, the cover of the first issue in O’Neil’s run (and the first issue collected in Superman: Kryptonite Nevermore) shows Superman literally breaking free from chains made of Kryptonite. It’s not just for show, either: within the first three pages, O’Neil has rendered every last bit of Kryptonite on Earth harmless to Superman, by means of a science experiment gone awry. From here on out, the story focuses relatively little on Kryptonite at all – although it does lead to some rather funny moments in which criminals attempt to use Kryptonite against Superman, only to have Superman basically laugh in their faces (see right).

But as is the case with most radioactive tests in superhero comics, the outcome is hardly a bed of roses for the main character. The experiment also brings into existence a strange duplicate of Superman – one that can’t think or feel, but which possesses all of Superman’s powers. When the two are close to one another, the duplicate saps Superman’s strength and becomes more powerful itself; and if the two were to come into physical contact, we learn, the Earth would be completely destroyed. O’Neil wisely uses this as a means to permanently weaken the main character, eschewing the problematic, “all-powerful” depiction of Superman that had reigned supreme over the two previous decades.

The duplicate isn’t necessarily evil – it’s just mysteriously drawn to Superman, and it seems to follow him everywhere. As a result, Superman often loses his powers at the most inopportune times, forcing him to use his head in situations where he might otherwise have used his fists. The resolution to this plot at the end of the collection is a satisfying one, complete with a nice fake-out of an ending by O’Neil in which it appears that Superman and his duplicate have destroyed the world in their final battle.

The reduction in Superman’s powers is just one of a number of changes O’Neil imposes on the character. The biggest is undoubtedly Clark Kent’s shift from newspaper reporter to television news anchor, a peculiar switch demanded by new Daily Planet owner Morgan Edge – a man who, as we see in a few scattered interludes, is secretly working for the villainous Darkseid. (That subplot doesn’t come to fruition in this collection, though, and for the most part it’s incidental to the main story.) Superman soon finds that being on TV is much different than writing for a newspaper, since he now has to be careful to keep his identity a secret from millions of viewers in addition to the people he works with at the Planet. Equipped with a “portable television transmitter” (a television camera that, conveniently enough, doesn’t require a cameraman), Clark travels all over the world for his new job. Curiously, though, no one ever seems to ask how he gets around so quickly without ever catching a plane.

For the most part, I found the stories in this collection to be very entertaining, and a nice change of pace from the more traditional Superman formula. The character still faces some hilariously ridiculous, Silver-Age-style threats (a pair of giant ants, for instance), but these are mixed with more contemporary villains, like a group of “bandits” – terrorists, really – who kidnap Lois in the South American jungle. 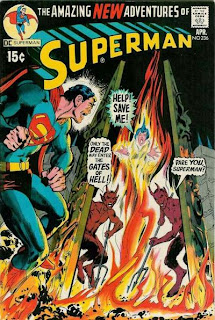 There’s only one legitimately bad story here, involving a group of angels who convince Superman that he’s gone to Hell. As it turns out, the “angels” are actually just fugitive aliens who happen to look the way that people on Earth imagine angels. (How convenient!) If nothing else, this story reminded me of how much more prevalent Christian imagery used to be in comic books, and in popular culture in general, than it is today. I wasn’t bothered by it on any level other than the plot itself being a mediocre one, but I can’t imagine a story like this one being met without some controversy today. Of course, I might just be overestimating the sensitivity of comic book readers; people seem to be wholly accepting of rape and murder in their superhero comics these days, so who knows, maybe DC could get away with this too.

Speaking of controversy, though, DC has made an extremely controversial choice in its coloring for this book. Rather than re-coloring the original artwork the way Marvel and DC usually do for their “classic” collections, the art here seems to replicate what the original comics must have actually looked like. That is to say, the colors are faded and washed-out, and often have something of a yellowish hue to them. Some will almost certainly hate the book for this reason alone, but personally, I love it. The coloring made me feel as though I was reading the original comic books – a feeling helped, no doubt, by the fact that the art is handled by longtime Superman artist Curt Swan – and I think the decision to refrain from “cleaning up” the color is a bold decision on DC’s part.

It’s interesting to read stories like these, in which it’s clear that the writers and editors at DC are beginning to try to retool the aspects of their characters that just don’t work anymore. In fact, as sort of a revisionist take on the character, the stories collected in Superman: Kryptonite Nevermore can be seen as something of a precursor to comics like Crisis on Infinite Earths, which would shake up and modernize the characters of the DC Universe in a much more blatant and lasting fashion. Even in its own right, though, this book provides an entertaining glimpse at a largely-forgotten era of Superman comics, especially for those who can appreciate the quality of the reproduction.