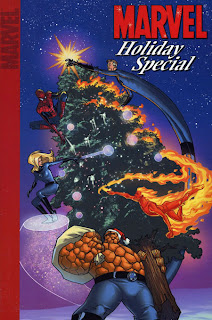 Every year, both DC and Marvel typically release some sort of special holiday-themed one-shot, usually at some ridiculously high price point. The stories in these issues, at least in my experience, are usually of middling to slightly-above-average quality, mainly featuring younger or lesser-known writers and artists. Perhaps needless to say, events in the holiday specials are for the most part light-hearted and largely inconsequential as far as “main” continuity goes. That said, I almost always bought Marvel’s holiday one-shots back when I still actually purchased single issues, simply because they provided a nice opportunity to get away from the doom and gloom of whatever other stories were being told in the characters’ main series.

A few years ago, Marvel did something sort of interesting by packaging a few of their holiday one-shots into an inexpensive, digest-sized trade paperback, titled simply Marvel Holiday Special. The trade collects the 2004 and 2005 one-shots, along with a few classic tales from years past, for only $7.99 – a few cents short of the combined cover price of the two one-shots, making the book a pretty good deal. (If you shop around, you can find it even cheaper…I actually paid just $2.50 for my copy!)

Of the modern stories, the best is probably “Jonah’s Holiday Carol,” a re-telling of Charles Dickens’ A Christmas Carol with the curmudgeonly J. Jonah Jameson stepping in for Ebenezer Scrooge. As you might imagine, the “ghosts” that help him see the true meaning of the holidays are all prominent figures in the Marvel Universe, although I won’t spoil the fun by going through who all of them. Another solid story involves a New Avengers Christmas party that gets broken up by Santron, an Ultron robot reprogrammed to eat cookies and deliver toys to good little boys and girls – and to kill the Avengers, of course! This story also features Gravity, my absolute favorite lesser-known Marvel character, which automatically boosts its appeal for me.

Also decent, if not exceptional, are a pair of Fantastic Four stories – one starring Reed and Sue’s son Franklin as he tries to figure out the meaning of Christmas, and the other about the team’s efforts to determine why the Mole Man’s henchmen have been kidnapping shopping-mall Santas. The latter has art by Roger Langridge (writer/artist of The Muppet Show), whose cartoonish style, for lack of a better word, lends the story a lot of humor.

There’s also a Fantastic Four story written by Mike Carey and drawn by Mike Perkins (probably the two most well-known creators to contribute to these one-shots), which is told in the form of a poem. The art is a departure from Perkins’ usual style – in fact, it looks like he read a little too much Perry Bible Fellowship before setting to work on it – and the rhyming aspect of the narration and dialogue can get a little hokey, although it does have the advantage of making the story stand out a bit from the others.

Less interesting is a story about Cyclops, Emma Frost, and Wither (a young mutant whose “power” is that everything he touches dies – good thing he’s not on the bad guys’ side, right?). It’s basically just about the two X-Men trying to cheer Wither up, since he doesn’t have a family to go home to over the school’s winter break. There’s nothing wrong with the story, but it’s not all that interesting either, especially for people (like me) who have never even heard of Wither before.

The two one-shots are followed first by the 1971 debut issue of Marvel Team-Up, in which Spider-Man and the Human Torch track the Sandman throughout New Jersey and New York City on Christmas Eve. This issue has been collected in a few different trades over the years (and will be collected once again in the much-anticipated first Marvel Team-Up Masterworks edition in just a few months), but this is undoubtedly the most affordable way to read the story in color. Written by Roy Thomas and drawn by Ross Andru, this issue is a fun classic with a nice mix of action and introspection from Spider-Man, the Torch, and even Sandman.

The final issue collected in this trade is a 1980 issue of Uncanny X-Men, written by Chris Claremont and penciled by John Byrne. It follows the team’s newest recruit, Kitty Pryde, as she’s chased around the X-Mansion by a horrifying demon (clearly inspired by the creature from Alien), again on Christmas Eve. I’ve commented before on Claremont’s unfortunate inclination towards stories featuring “strong” female leads, but this one is actually pretty good – probably due in large part to the fact that Kitty is simply a more interesting character than Claremont’s usual subjects.

Overall, Marvel Holiday Special is a pretty solid mix of new and old holiday-themed superhero stories – even if none of them can really be considered truly outstanding. Sometimes “not outstanding” is perfectly acceptable, though, especially when those stories are so far removed from the norm (and as cheaply collected!) as these ones.