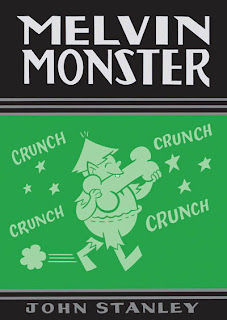 John Stanley will almost certainly be forever celebrated as one of the greatest and most prolific creators in the history of children’s comics. He’s best known for Little Lulu (one of my favorite comic book series from the 1950s), but he created comics based on a wide range of other well-known characters too, including Alvin and the Chipmunks, Krazy Kat, Nancy, and Woody Woodpecker. One of his most original efforts, Melvin Monster was a short-lived series – ten issues long, the last issue being a reprint of the first – but also one of the creator’s most critically-acclaimed. This first installment in Drawn and Quarterly’s “John Stanley Library” collects the series’ first three issues, reprinted on nice, thick paper from high-quality scans of the original comics.

The concept of the series is essentially that Melvin is a little boy monster who looks and acts like a cross between Frankenstein’s Monster and Tubby from Little Lulu. He lives in Monsterville with his parents “Mummy” and “Baddy,” whose physical appearances (as you might imagine, since this is a fairly humorous children’s comic) are reflective of their names. The overall tone is in keeping with the comically inverted moral sensibility of shows like The Addams Family and The Munsters – both of which were popular at the time Melvin Monster was being published – in which behavior that we would think of as “good” or “normal” is considered strange and unnatural by the characters. As a result, Melvin’s parents encourage him to play hooky, throw rocks at windows, and generally cause mischief whenever and wherever possible.

Melvin is an interesting case, though, in that he would rather go to school and be nice to people than get into trouble. He doesn’t have quite the same sense of moral uprightness as a character like Casper the Friendly Ghost, but he’s just as charming in his naiveté. This comes through most clearly when he’s transported, on several different occasions, to our own world (which is alternately called “Human Being Land” and “Humanbeanville”). Despite the best of intentions, Melvin manages to annoy quite a few people through such peculiar activities as running across the middle of a busy street and eating a man’s shoe right off his foot. When the people he’s offended attempt to do him harm (one man actually tries to run him over with a car), the always-innocent Melvin believes they know he is a young monster and that they’re simply trying their best to make him feel at home.

The first two issues each tell a full story from start to finish. The first sees Melvin unintentionally blowing up the monster schoolhouse, getting lost in the human world, and being captured by a duplicitous old man for display in a zoo; the second has Melvin discovering that a door in his parents’ basement leads into a subway tunnel, leading him into even more misadventures in the human world. The plots unfold much like they do in Little Lulu, beginning with a fairly straightforward situation (Melvin wanting to go to school in the first issue, for example) which quickly spirals into ridiculous (and hilarious) territory. The third and final issue is the weakest of the group, being composed of a series of shorter stories of about three to five pages each. It does have some of the most hilariously bizarre imagery in the book, though, including a corpulent French mouse armed with a meat cleaver.

Aside from Melvin and his parents, other recurring characters include Damon the Demon (Melvin’s useless and negligent “guardian demon”) and the family’s pet crocodile Cleopatra, who mirrors the frenzy of the crocodile in Peter Pan in her constant attempts to eat Melvin. The main character’s utter obliviousness to the fact that everyone else seems to have it in for him is a near-constant source of humor – at one point, for instance, a witch feeds him an entire barrel of poisoned apples, to no avail – although if you read enough in one stretch, his stupidity can get a bit tiring. That small disclaimer aside, Melvin Monster is pretty enjoyable reading.

I do have a fairly significant complaint about the actual collected edition itself, though, which is that it lacks any kind of introduction or afterword explaining the material’s significance or context. In archival volumes like these (see anything published by Fantagraphics, or under IDW’s “Library of American Comics” banner), it’s become customary for book editors to present at least some information about a comic and its author(s). Books like this one present the opportunity for seriously investigating the cultural and historical significance of comics, and it’s sad to see that squandered in this case.

That’s not necessarily a reason to avoid Melvin Monster, but for those approaching it in the hopes of learning more about John Stanley and his work, it’s something to keep in mind. If you’re really interested in Stanley, or in children’s comics from this era in general, Little Lulu is a much better bet; but if you’ve already familiarized yourself with Lulu and her pals, or you’re simply looking for classic comics more in the Halloween spirit, this isn’t a bad book to look into either.