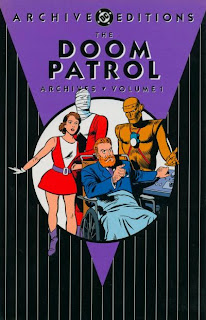 The Doom Patrol is a team of superheroes perhaps best known, sadly, for supposedly being ripped off by Stan Lee when he created the X-Men. However, that idea does an incredible disservice to both Marvel and DC, who both deserve more credit. Furthermore, it simply isn’t true. Yes, both teams star a group of super-powered social outcasts led by a man in a wheelchair, and their mortal enemies have similar names: the Doom Patrol fights the Brotherhood of Evil, while the X-Men fight the Brotherhood of Evil Mutants. But that’s where the similarities end, quite frankly, and with X-Men #1 hitting the stands only three months after the Doom Patrol’s first appearance, there is literally no way that Lee could have known about the Doom Patrol’s existence before writing his new, mutant-based comic book series.

Still, it’s a myth that’s been perpetuated for well over forty years, to the point that it’s almost completely overshadowed the Doom Patrol’s original five-year run (from 1963 to 1968), which was handled from start to finish by writer Arnold Drake and artist Bruno Premiani. (Bob Haney also receives co-writing credit on the first two issues, although his influence was actually pretty minimal.) Even the people who put this particular collection together belabor the “rip-off” argument on the inside of the book’s cover jacket, which I think is kind of petty on DC’s part. Luckily, Drake doesn’t bring it up in his introduction, which details how the book came about creatively and editorially.

Removed from the controversy and taken purely on its own terms, Doom Patrol is an incredibly unique comic book, one that I find much more interesting than other team books DC was publishing around the same time. Unlike Justice League of America, for example, which featured characters who all starred in comics of their own, the characters that make up the Doom Patrol are unique to this book and actually have some room to develop. That potential isn’t utilized to its fullest in this first Archive edition, but the stories do start to mature considerably about halfway through the book, when the title of the series officially switches from My Greatest Adventure to The Doom Patrol.

So who exactly are the Doom Patrol? The first issue introduces us to all four of the book’s main characters: Elasti-Girl, who has the ability to stretch her body and to expand and reduce her size; Negative Man, a heavily bandaged individual (think of the Invisible Man) who can release a being of pure radio-energy from his body, but only for 60 seconds at a time; Robotman, a former stunt daredevil whose brain now resides in the metal body of a robot; and the Chief, the ingenious but mysterious wheelchair-bound man who has brought the team together.

The Chief is by far the most interesting member of the Doom Patrol, with Drake constantly teasing at the nature of the character’s secret past and true identity. In one story, the Chief even propagates multiple versions of his own “origin” (much like the Joker does in The Dark Knight) in order to confuse the other members of the team and to weed out which one of them has been leaking information to the press. And perhaps it’s that I’m projecting something onto the story that simply isn’t there, but I couldn’t help but question the Chief’s motives at various points throughout the book – why did he assemble this team? How does he know so much about the other members, and why won’t he even reveal so much as his own name?

Even when the Chief’s backstory is partially revealed in one of the last issues of this collection, I’m not sure I entirely buy it. I still think there’s something he’s hiding – but again, maybe that’s just me. (For the record, though, it’s my understanding that Grant Morrison felt basically the same way, giving the Chief some more explicitly villainous qualities in his 1980s run on the title.) Either way, it makes me anxious to read the other four Archives in the series, if only to see how the mystery of the character plays out.

The other team members aren’t quite as interesting, but they’re still strangely compelling. Labeled as “freaks” by society at large, all three are extremely angry – not a quality you tend to see dominating an entire team in superhero comics from this time. “Edgy” is perhaps a cliché word to use when describing angry comic book characters, but it fits here, and at times it’s actually pretty difficult to tell why the team stays together at all. Interestingly, they don’t even begin to wear the costumes pictured on the cover until the last issue of this collection; prior to that, Elasti-Girl fights crime in a skirt and high-heeled boots, and Negative Man wears what appears to be a dark green sweatsuit. (Needless to say, the costumes are a welcome change!) Robotman and Negative Man are by far the angriest members of the team, and they take out their frustrations on one another by hurling insults over the fury of battle.

And what battles they fight! Almost every story involves humorous pseudo-scientific twists (humorous from today’s standpoint, anyway) and clever new uses for the Doom Patrol’s powers. The team faces a number of fantastically weird villains, including a brain in a jar, the Animal-Vegetable-Mineral Man (guess what three things he can turn into?), and a talking, French gorilla. The stories are surprisingly varied too, going beyond the simple superhero vs. supervillain formula – in one of the final stories, for instance, Elasti-Girl goes to Korea to solve the mystery of a missing-in-action American G.I.

All of these things work together to set the Doom Patrol significantly apart from the majority of other super-teams that populated the 1960s. My only complaint with the first Archive edition is that the art reconstruction goes too far in some cases, and there are more than a few panels where it’s clear that there were more lines in the original pencil art. The colors too, especially in the shading of Negative Man’s bandages, are a bit anachronistic in their sophistication. Such is the case with all of the color reprints that Marvel and DC put out, though, and the restoration in this case isn’t any better or worse than what they typically offer.

Overall, The Doom Patrol Archives, Vol. 1 certainly has my recommendation, and with the entire series being done by the same creative team, I’m confident that it will only improve with subsequent volumes. Its cult status today is unsurprising given its more unique aspects, and I would encourage anyone looking for a strong dose of Silver Age weirdness to give it a look.