Review: Wolverine: Not Dead Yet 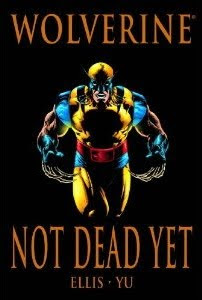 I have read more Wolverine comics than any other person alive.

Okay, that’s a bit of an exaggeration – there are a ton of Wolverine stories, even a ton of Wolverine collected editions, that I haven’t read, but still, I feel like I must have read at least a few dozen of them over the years. It’s kind of weird, actually…Wolverine isn’t my favorite character in comics (see: the title of this blog), but he’s one of my favorite characters to read about, if that makes any sense. There are so many different facets to his personality, so many different roles he’s able to assume, and of course there’s that mysterious, mostly untold past of his. It all makes for a wide variety of story possibilities, some of which are really interesting while others are utterly forgettable.

Unfortunately, Wolverine: Not Dead Yet falls more into that second camp. Even though, as I’ve just said, there are tons of possibilities for Wolverine stories, there are certain angles that writers tend to take with the character over and over again, and if you’ve seen a story from that angle once, you’ve basically seen them all. It’s that sort of “been there, done that” feeling that leaves me a bit cold towards this particular collection, although it’s not without its merits.

The main draw of Not Dead Yet is that it features artwork by Leinil Yu, who has gone on to become a comic book superstar over the twelve years since this material was first published. His work here is strong, and I actually like it better than his current style. I think that has mostly to do with the fact that until recently, Yu did not ink his own work – here, he’s assisted by not one but two inkers, Edgar Tadeo and Gerry Alanguilan.

Even at this early point in his career, Yu’s work is sleek, yet detailed. It’s the little touches that make him stand out to me, from the dense texture of the hair on Wolverine’s arms to the slow, visceral way blood drips from the character’s claws (which are made of bone in this collection – Wolverine would get his adamantium skeleton back about a year after this story). This was a style that Yu would perfect a few years later in Superman: Birthright, and it’s interesting to see it in its infancy here.

As much as I like the art, though, I simply can’t bestow the same praise on Warren Ellis’s story. There really isn’t that much to say about it, to be honest: it follows Logan as he hunts down a man from his past who’s seemingly come back for revenge, which is pretty much as formulaic as you can get when it comes to stories about this character. The main plot is intercut with flashbacks to conversations Logan had with the man in Hong Kong ten years earlier, which are much more interesting than anything going on in the present. Ellis tries to create a sense of mystery as to whether the man is still alive or if it’s really someone else who’s after Wolverine, but a few badly executed twists too many in the final act bring that subplot to a pretty dissatisfying conclusion.

The story is only four issues long, with the last twenty or so pages of the collection consisting of a Leinil Yu cover gallery (he was a fairly regular cover artist on Wolverine both before and after Not Dead Yet). The art is pretty good, and it’s certainly better than Marvel including script pages, but it’s obviously just padding to boost the book’s cover price. I also found myself a bit annoyed by the book’s introduction, which was written by Ellis in 1998 for the first paperback edition of this collection. Couldn’t Marvel have commissioned something a little more recent from either Ellis or Yu?

The relative slimness of this book and the formulaic nature of its story combine to make Wolverine: Not Dead Yet a pretty tough sell, in my opinion. If you’re a Leinil Yu enthusiast interested in taking a closer look at his early work, I guess this isn’t the worst thing you can buy; as I’ve already mentioned, though, Superman: Birthright is a far superior choice in that vein. And as for Wolverine, there are countless other collections better than this one – many of which actually dare to do interesting and novel things with the character.