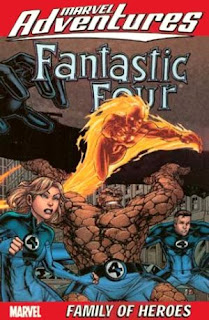 The first volume of Marvel Adventures Fantastic Four is fortunate enough to avoid the biggest pitfall of Marvel Adventures Spider-Man’s earliest issues – that is, it tells brand-new stories rather than simply rehashing old ones. Sadly, Jeff Parker doesn’t ever hit the same groove that he did in the one issue of Marvel Adventures Spider-Man that he wrote (which, by contrast, was a lot of fun), and parts of this book are actually pretty boring. The fact that Parker only co-writes the first two issues – with Akira Yoshida, whose writing typically falls somewhere between average and mediocre in quality – is probably a big part of the problem.

There are a few bright spots, though. Parker comes up with some pretty clever ways for the Fantastic Four (especially the Human Torch) to use their powers in the fourth issue, which is by far the best of this collection. But even so, the pacing is off and emotional development throughout is shallow at best. Most of the book consists of the team getting their butts kicked by whatever villain they happen to be fighting, and their means of ultimate triumph in each situation don’t seem very well thought out. In one of the stories, there are a couple of completely random panels where Dr. Strange comes out of nowhere to fix everything that’s gone wrong before disappearing just as quickly.

I might be able to look past the underdeveloped stories to some extent if the action scenes themselves were well-done, but they’re really not. The bad guys chosen for the book aren’t all that exciting – in the book’s four stories, we get Annihilus, Diablo, a group of mischievous Skrull kids, and a renegade Sentinel robot (on loan from the X-Men, apparently). There’s no Dr. Doom, no Sub-Mariner, no outer space or time travel adventure. If this had been my first Fantastic Four book as a kid, I doubt I could have summoned the interest to read the next book in this series.

The digest format doesn’t do the art any favors either. The pencils are fine, if nothing extraordinary, but the coloring is just awful. Everything looks incredibly dark, which is a serious problem when you’re trying to decipher art that’s already been greatly reduced in size. Making things worse, most of the stories take place inside dark, drab buildings, which isn’t in keeping at all with the bright, generally cheerful atmosphere I associate with the Fantastic Four. Overall, it makes for a pretty dull reading experience.

Although this book didn’t impress me, I’ll probably give the next one a chance the way I decided I would for Marvel Adventures Spider-Man. Future volumes in that series look to be a significant improvement on the first, and with Zeb Wells and Fred Van Lente eventually coming on as writers for this title, I still have some hope. Writing for children and adults at the same time is no easy task, and any series aiming to do so is bound to face some growing pains; my hope is that by the next time around, this series will have gotten past them.