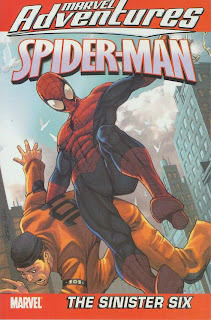 In 2003, Marvel Comics launched “Marvel Age,” a line of comic books aimed at younger readers that retold classic stories in modern-day settings and with contemporary artwork. The comics were collected relatively quickly into small, digest-sized books, presumably to capitalize on the growing market for similar-looking manga publications in the United States. Bound to remain completely faithful to the original stories they were based on, there wasn’t much room for creative flexibility with Marvel Age and the comics simply weren’t too impressive.

The company took steps to improve that situation in 2005, when they canceled the Marvel Age line and revamped it as “Marvel Adventures.” The Adventures books are also suited for all ages, but their purpose is less narrowly defined; unlike Marvel Age, they often tell brand-new stories with the only mandate being that the stories can be enjoyed without an extensive knowledge of Marvel chronology. Since its launch, Marvel Adventures Spider-Man has gone on to become one of Marvel’s best-selling titles.

Unfortunately, the series gets off to a pretty rough start in this opening volume. Children’s author Kitty Fross writes the first issue, which concerns itself with retelling Spider-Man’s origin for the umpteenth time. I’ve probably read more than a dozen versions of this story, and none of them (with the possible exception of Brian Bendis’s Ultimate Spider-Man) has ever held a candle to the original. This particular version falls somewhere in the bottom half of all the ones I’ve read, since it lacks so much as a trace of the pathos that makes Spider-Man’s first appearance in Amazing Fantasy #15 so powerful.

The emotional impact of the original story comes from the death of Uncle Ben, an effect that’s completely absent here. There’s a half-hearted attempt to make it seem as though Peter took Ben for granted while he was alive (Ben wants to play cards at one point; Peter says he has to study instead), but there isn’t enough interaction between them to make Ben’s death sufficiently traumatic for the story’s purposes. I’ve read Amazing Fantasy #15 more times than I’ve read any other story in comics, and it still gets to me on a basic emotional level. This version, despite being derived from the same plot, does absolutely nothing for me.

The second and third issues, written by Erica David, are basically a stripped-down, drawn-out retelling of Amazing Spider-Man Annual #1 (1964), the first appearance of the Sinister Six. The plot is about as bare-bones as they come – Doctor Octopus & Friends break out of their jail cells, terrorize New York City, and do their best to get rid of “that pestilent pest” Spider-Man once and for all (and yes, Doctor Octopus actually says that). The villains’ characterizations are incredibly weak, and the subtleties that Stan Lee was able to give them nearly 50 years ago are nowhere to be found. Instead they scowl, shake their fists, and boast to one another about which of them is ultimately going to “destroy Spider-Man.”

You might think that with so many villains in one story there would at least be some fun action sequences, but that’s not really the case either. Their methods for attempting to defeat Spider-Man are uninspired, at best: Electro shoots electricity; Mysterio creates illusions of himself; Doc Ock, Sandman, and the Vulture try to pummel Spidey with their fists (mechanical or otherwise); and Kraven tries to capture Spider-Man with a handful of traps so lame they would make Macaulay Culkin blush. The story isn’t quite stupid enough to be offensive, but it is pretty boring.

If there’s any redeeming quality to this collection, it’s the fourth and final story. Written by Jeff Parker, this is the only issue to feature a completely original story – by this point, a godsend in and of itself. It deals with Spidey and the Human Torch teaming up to do battle with two little-known villains: Street, who is literally a living chunk of NYC asphalt, and Goom, a gigantic alien whose only knowledge of Earth comes from having watched way too much MTV.

I would be remiss not to mention the art of Patrick Sherberger in this volume, which is much more consistent than the writing. While he hasn’t fully developed his own style by the end of the book (he seems to be aping Humberto Ramos’ style most of the time), it’s still above average. But even so, consistent artwork and one good story out of four don’t make up for the fact that the majority of Marvel Adventures Spider-Man, Vol. 1: The Sinister Six is a derivative bore. The series continues with all original stories from here on out, though, and if they’re anywhere near as entertaining as the final story was in this volume, they could be worth a look.