Review: The Chronicles of Conan, Vol. 1: Tower of the Elephant and Other Stories 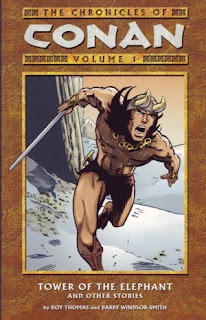 Conan the Barbarian: a character whose very name is sure to elicit a knowing chuckle from most people. And rightly so, if we’re talking about the Arnold Schwarzenegger movies! I’ll admit, I went into this collection fully prepared for brainless stupidity, but since the series is an important part of comics history, and because it’s written and drawn by two industry legends, I thought it couldn’t hurt to see what it was all about.

To make a long story short, I was dead wrong about Conan. I quickly realized that in order to enjoy this book, I would have to throw out all of my preconceptions about the character. In The Chronicles of Conan, Vol. 1: Tower of the Elephant and Other Stories, Conan may be impulsive and headstrong, but he’s certainly not a dumb brute. While his stories are fairly straightforward, at least in this first volume, they’re often also poignant and moving. The image of Conan created by Roy Thomas and Barry Windsor-Smith is one of a young man coming of age, through a series of picaresque adventures, in an interesting and dangerous fantasy world.

As most people are probably aware, the Conan mythos wasn’t exactly an invention of either Thomas or Windsor-Smith; as a character, Conan had already existed in the works of Robert E. Howard for several decades, since the early 1930s. But this was his first venture into the world of comics, and his ongoing series was also the first true “sword and sorcery”-type fantasy comic ever to be produced by a major publisher. With Marvel having just snagged the rights to Conan from Howard’s estate, the first few issues consist mainly of adaptations of the original novels and short stories. At this point, neither Thomas nor Windsor-Smith had quite found their creative footing yet, although it’s hard not to at least appreciate how much effort they put into it.

The stories improve with time, though, and there are several standouts in this volume, my favorites being “The Tower of the Elephant” and “Devil-Wings Over Shadizar.” The former concerns Conan’s encounter with an alien being held captive by an evil sorcerer; the latter is the first of Conan’s adventures in which he is motivated by genuine affection toward another human being, making its tragic ending all the more powerful.

At times the stories can take on a somewhat formulaic feel – Conan arrives in a new place, Conan gets into a fight with the locals but befriends one of them, Conan and his new friend go on a hunt for treasure, Conan’s new friend is killed, and Conan just barely escapes death himself – but whenever it starts to get boring, Thomas throws a curveball of a plot into the mix and everything feels fresh again. One great example is “The Twilight of the Grim Grey God,” an excellent story which serves as a potent commentary on the nature of war itself. I can see the prototypical Conan plot wearing thin if it continues for much longer after this volume, but for now, I think it’s suited perfectly to the character as he makes his way through the world and grows into a man.

The art, in the beginning, is fairly average for the decade in which Conan was first published, but Windsor-Smith starts to come into his own by the third or fourth issue. Thomas had originally intended for the series to be drawn by John Buscema, and while he’s a fantastic artist, I’m glad things didn’t end up working out on that front. While the art style in Conan is actually very similar to Buscema’s – due in no small part, I’m sure, to the fact that John’s younger brother Sal fulfills the inking duties throughout – there is a certain visceral quality to Windsor-Smith’s pencils that lends the comic a sense of individuality. Even at this early point in his career, it’s easy to see why Marvel would later choose him as the artist to depict Wolverine’s brutal origin story in the pages of Marvel Comics Presents.

The only truly negative thing I can say about this collection is that it doesn’t include any of the series’ original covers. As Thomas writes in the afterword (which is excellent, and certainly one of the book’s highlights), the covers were an important part of the series and its history. It’s hard to blame anyone specifically for the omission, since I believe it was the result of legal issues between Dark Horse and Marvel, but it’s still unfortunate. (In case you’re wondering, the original issues were published by Marvel, but Dark Horse is now reprinting them since Marvel no longer has the rights to Conan.) From what I can tell, this problem has been corrected for more recent volumes in the series, although it would be nice if future printings of the first one could be updated as well.

Overall, the adventures of Conan far exceeded my expectations, and even if you think you already know what to expect from them, I would still recommend taking a look. It’s actually a pretty unique series, especially for its time, and features some truly great art. I’m looking forward to reading the next book, in large part because I’m curious to see whether Thomas will begin to flesh out some kind of overarching plot. Even if that’s not the route this book ultimately takes, though, Thomas and Windsor-Smith have demonstrated that the character has more than enough potential variety to keep things interesting for some time.