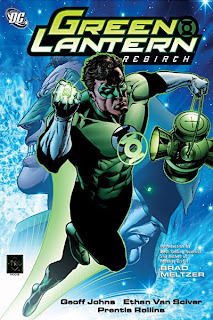 In Green Lantern: Rebirth, Geoff Johns had the unenviable task of fixing more than a decade’s worth of DC completely mishandling the Green Lantern mythos. He was also tasked with restoring Hal Jordan, the original Green Lantern, to the focal point of the franchise. I can’t imagine this was an easy task for him, and the end product isn’t entirely perfect. With the help of the extraordinarily talented Ethan Van Sciver, though, he manages to pull it off fairly well.

The mess created in the decade prior to Rebirth really can’t be understated. Not only had Hal Jordan become a crazed mass-murderer, but he was now the embodiment of the Spectre (God’s Spirit of Vengeance — whatever that means), and his replacement as Green Lantern was a younger, “hipper” character (Kyle Rayner) who still had yet to be truly accepted by many fans. The Guardians of the Universe and the Green Lantern Corps, intergalactic organizations that had been staples of the Green Lantern universe from the very beginning, had been completely removed from the books. Likewise, Hal’s mortal enemy Sinestro had been rather anticlimactically killed off. Oh, and Guy Gardner (Earth’s Green Lantern in reserve) had become a super-muscled half-alien with the ability to morph his body parts into weapons. God bless the ’90s, right?

From the first issue of Rebirth, Johns does a great job of establishing these characters’ personalities and the current status quo of their collective universe. This makes the book a great place to start for people who aren’t very familiar with Green Lantern. Before I read Rebirth for the first time, my only knowledge of the character came from having read about a dozen issues of the first Green Lantern series (published in the early 1960s), and I felt like I understood the characters in no time at all. But Rebirth also appeals to long-time Green Lantern fans, who I imagine were happy to finally see some justice done to their favorite characters when the series began in 2004.

The main thrust of the story is that the atrocities committed by Hal were actually caused by Parallax, an entity made of pure fear that corrupted his mind and took control of his body. While that may sound like a lazy explanation at first, Johns makes it all work by incorporating Parallax into the pre-established Green Lantern mythos. Hal’s ring has always been powerless over the color yellow, and by establishing Parallax (the embodiment of fear itself) as the ring’s “yellow impurity,” Johns actually gives meaning to a limitation on the character that’s always been somewhat arbitrary.

Considering some of the more clichéd comic book conventions Johns could have used to absolve Hal of his actions (clones, time travel, etc.), this explanation works pretty well. In fact, while I haven’t read many of the stories that were effectively undone by Rebirth, I suspect Johns’ new explanation for the events they portray is actually better than the original ones were. I can’t help but wonder if, by some weird literary retrofitting effect, those stories might actually read a little better now if we keep Parallax and the yellow impurity in mind.

But as Brad Meltzer notes in the book’s introduction, Johns doesn’t stop with simply restoring Hal to his former grace. It would have been easy to kill off Kyle, and maybe even Guy, but Johns breathes new life into them instead. He gives them a purpose again, one that both supplements Hal Jordan’s role in the DC Universe and works in its own, self-contained right. (In fact, the story of Kyle, Guy, and another Green Lantern, Kilowog, actually continues in the miniseries Green Lantern: Recharge, which then becomes the ongoing series Green Lantern Corps.)

However, I do have one major bone to pick with Rebirth, and it’s Johns’ characterization of Batman. Throughout the story, Batman is depicted as a bad guy for being suspicious of Hal and the fact that he has returned to life. Realistically, this makes perfect sense; Batman would have to be pretty ignorant to just blindly accept that a man responsible for so much death and destruction is suddenly one of the good guys again. The worst moment comes toward the end of the book, when Batman demands an explanation and Hal’s response is simply to punch him in the face and fly away. Even if Batman’s suspicions were groundless, Hal has just been “reborn” — shouldn’t he try to take the high road in this new life, and start off on the right foot with his fellow heroes? Shouldn’t he have grown as a character as the result of his rebirth, or should we be content with him being exactly the same character he was before DC editorial decided to make him a murderer all those years ago? If anything, the whole conflict makes Hal look like an even bigger jerk than Johns seems to think Batman is.

I also don’t buy Johns’ attempt to make Batman and Green Lantern into diametrical opposites — as manifestations of fear and hope, respectively. Batman is not a character defined by fear, as GL is by hope; rather, Batman instills fear in his enemies. Green Lantern does the exact same thing (as do most superheroes, for that matter), even if he doesn’t go about it as theatrically as Batman does. The center of Johns’ analogy simply doesn’t hold, and the ending of Rebirth rings hollow as a result.

That said, there’s still a lot to like here, and it’s thanks in large part to Van Sciver’s artwork. I particularly like the way he draws each of the five Green Lanterns in the story (Hal, Kyle, Guy, John Stewart, and Kilowog) as having different ways of handling their powers. Each has a visually distinctive method of flying, and the way energy emanates from their respective power rings in the final battle against Parallax is unique as well. Little touches like these make it clear that Johns and DC intend to treat these characters with the individuality and respect they deserve, and that we don’t have to worry about the mistakes of the ‘90s rearing their ugly heads any time in the near future. Welcome back, Hal.