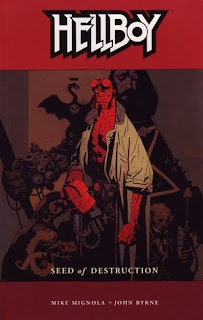 Seed of Destruction begins with an idea that’s interesting enough: as the Second World War comes to a close, the Nazis attempt to summon the powers of Hell to turn the tide in their favor. Unfortunately for the Third Reich, their success works to their enemies’ advantage, with the demonic baby they conjure up – soon to be dubbed “Hellboy” – falling into the hands of the Allies.

From this point, writer/artist Mike Mignola fast-forwards the story half a century into the future. It’s almost too bad, because I think the adventures of baby/child/adolescent Hellboy could have been pretty interesting. The title character, along with teammates Abe Sapien (a merman) and Liz Sherman (a pyrokinetic), is now an agent of the U.S. government who investigates paranormal activity. A series of strange events involving one of the Americans who originally discovered him leads Hellboy and his team to an old Victorian house – here, he confronts the wizard responsible for bringing him into the mortal plane in the first place.

This book was my first Hellboy comic book experience and, having heard so many good things about the series, I expected to enjoy it quite a bit. However, several things prevented that from happening. First, there’s a sort of “hurry up and wait” pacing to the book that just feels a bit off. I would have liked to learn more about Hellboy and his world after the exciting opening sequence, but instead the character rushes straight into the clutches of the bad guy, spending a full half of the book as a helpless captive. Most of the story consists of the wizard rambling on about his past and his master plan to destroy all of creation, with Hellboy taking on the equally clichéd “You’ll never get away with this!” role. Very little time is spent with Abe or Liz (who is actually unconscious for most of the book), which is disappointing because both seem like characters with a lot of potential.

The main draw of Seed of Destruction is the artwork, which is fantastic. It’s dark and moody, but in a fun, almost campy sort of way, and the Lovecraftian monsters that the wizard spends most of the book trying to awaken are especially eye-grabbing. My guess is that Mignola, who didn’t have much experience writing comics before Hellboy, came up with the plot and asked John Byrne (who receives credit for co-writing the book) to help with the script. Although the central ideas are interesting, the result is still an ill-paced, overly verbose comic that runs at least one issue too long. I suppose I’ll give the second book a try, but only on the basis of all the praise that’s been heaped on this series over the years; my hope is that with Mignola penning the subsequent volumes by himself, the end product will be a lot less average.