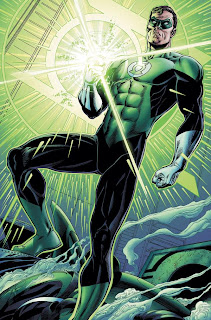 Looking back at the review of Green Lantern: Rebirth I posted earlier this week, I’ve realized that there are still a few more things I’d like to say about it. The main thing I left out of the review was my opinion of the short story which begins the book, which I think may give a slightly better indication as to why I have a lower opinion of Rebirth than many people do (although, to be clear, I do still like the book – I just don’t think it’s magnificent). The short story was originally published as a preview for Rebirth in the pages of Wizard Magazine, and to the best of my knowledge, it was never published as part of any single comic book issue. It’s only six pages long, and after a few pages telling us that “Parallax is coming,” the rest of the story is devoted to a fight between Parallax and the Spectre over Hal Jordan’s soul.

Quite frankly, I think the story is terrible and that its inclusion in the collected edition is a mistake. As I mentioned before, Rebirth was the first Green Lantern book I read that was published after about 1965. I had been told that it was the perfect jumping-on point, even for people who were completely unfamiliar with the character. But when I read the preview story, I was incredibly confused; in fact, I distinctly remember closing the book afterward, and I came very close to never opening it again. Who were Parallax and the Spectre, and why, in this story that was supposedly new-reader-friendly, was it assumed that I already knew who they were? The main series does a good job of explaining these questions, of course, but this introductory story makes for a baffling start. It’s very clearly written for people who were already following Kyle Rayner’s exploits as Green Lantern prior to Rebirth, and even as someone with a working knowledge of the character and his mythos, I found it completely inaccessible as a new reader.

I would be really curious to hear what other people thought of the story, and if they had as much difficulty with it when they first read it as I did. I would also be interested to hear from people who were already following Green Lantern around the time of Rebirth: Did the story make sense to you? Or, since it was published in Wizard and never released in single issue format, did you skip it completely? 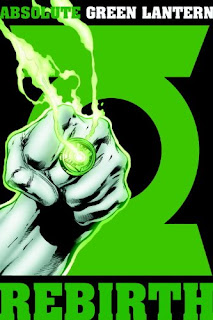 Shifting gears somewhat, as I’m sure many people know by now, Rebirth is soon going to be re-collected in Absolute Green Lantern: Rebirth, an oversized hardcover which will retail for $75. Personally, I think this is a bit silly. A six-issue comic book series does not warrant a collection that expensive, and no amount of extra features could justify a $60 price difference to me. After all, the softcover version already includes Johns’ original proposal for the series, as well as several sketch pages – what more could you really want? The Absolute Edition, according to Amazon, will be 224 pages, whereas the softcover is 176 pages. That isn’t a substantial difference, which leads me to believe that the new material will be limited to some script pages, a few pages of un-inked pencil art, and maybe an interview with Geoff Johns or Ethan Van Sciver.

I might feel differently if the Absolute Edition also included the first ten or twelve issues of the main Green Lantern series, and if it was the first in a series of hardcovers reprinting Johns’ run on that title. At least then you might be paying a reasonable price for the amount of material in the book; as it is now, Absolute Rebirth will essentially be charging you over $12 per issue. This is even more ridiculous when you consider that Absolute Batman: The Long Halloween and Absolute DC: The New Frontier were sold for the same price, but had 400 and 462 pages, respectively – roughly twice as many as Absolute Rebirth.


And with that, I think I’ve said my piece on Green Lantern: Rebirth. If you have a moment or two, feel free to share your thoughts on the Wizard preview story or the Absolute Edition in the comment section. See you on Monday for another review!
Posted by Marc at 4:30 PM