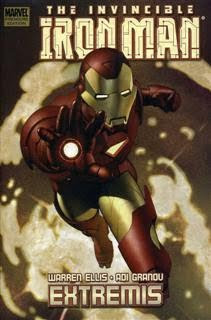 Re-launched in the wake of Marvel’s Avengers Disassembled crossover, Iron Man’s third ongoing series proved to be somewhat of a misfire, at least from a publishing standpoint. While Captain America’s new series, which began in the same month under the pen of Ed Brubaker, burst from the gates at full speed and never looked back, Iron Man was destined for a much more plodding and intermittent publication history. In fact, Captain America had reached its sixteenth issue by the time all of Iron Man’s first six issues, collected in Iron Man: Extremis, had finally seen print.

As is most often the case with long delays in the comics industry, the art was the holdup. Of course, this isn’t such a problem when you’re reading the issues in collected form. However, in cases like these it’s hard not to wonder – would the delays have been worth it for people reading the comic at that time? Is the art really that good? In this case, the answer defies a simple yes or no answer, falling more into the category of “yeah…sometimes.”

It’s easy enough to see why Adi Granov was chosen for the job – his background in graphic design shines through in his work, especially his covers. Prior to Extremis, he was the primary cover artist for the second ongoing Iron Man series (and for the completists, all of his previous covers are collected in the back of this book). Afterward, he went on to design the suit for the first Iron Man movie. Extremis was one of his first – and, to date, one of relatively few – efforts at sequential art on Granov’s part, and he brings the same level of production value to his interiors as he does to the rest of his work.

His painted artwork is meticulously well-rendered, and his version of the Iron Man suit is definitely one of my favorites. Like the movies, Extremis gives the sense that the suit isn’t so much a superhero costume as it is a potential weapon of mass destruction. Gone are the oversized weapons and other bulky accessories Iron Man has sported in the past – Granov’s more streamlined version looks fast and sleek, which serves the story well.

If I have one complaint with Granov’s art, it’s that there are times when it seems somewhat lacking in dynamism. Maybe it stems from the fact that before Extremis he spent most of his time in comics painting covers, but panels that should convey movement sometimes look like elaborate, still poses instead. A prime example comes near the end of the book, when the art is clearly supposed to represent Iron Man in the process of knocking his foe to the ground with a repulsor blast from his hand. Instead, it looks like the guy is lying motionless at the bottom of a small crater as Iron Man gives him an energy bath. While scenes like this don’t occur too often, when they do come up it can make for a pretty jarring experience. 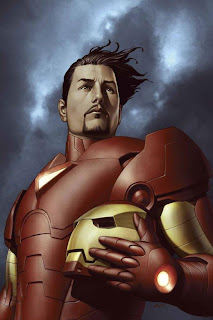 As for the story, Extremis is essentially an attempt to redefine Iron Man’s role in the world while also bringing him back to his roots. The story opens with Tony Stark consumed by depression and self-loathing after the events of Avengers Disassembled, but by the end of the book the character has new powers, a new Iron Man suit, and a new, more positive outlook on life. This is the story that served as primary inspiration for the first movie, not so much in terms of plot as in spirit: both deal with Tony trying to put his past behind him even as he realizes he can’t escape the consequences of his own mistakes. In the case of Extremis, this involves a woman from his past whose research has led to the unleashing of a bio-weapon capable of endowing the average person with enough strength to rival Iron Man’s.

Despite all the praise constantly being heaped on this story, though, I have to say that it’s not one of my favorite stories by Warren Ellis, a writer whose work I normally enjoy quite a bit. There are certainly some good parts, like Tony’s meeting with a half-crazed old mentor, a man reminiscent of Michael Caine’s character in Children of Men. This serves as the root of Tony’s depiction in Extremis (and ever since) as a futurist and an eccentric, which is an angle I’ve enjoyed for the most part. I also like the idea behind the new powers Tony gains in this book, the full scope of which aren’t revealed here; in a smart move, Ellis leaves that to future writers.

It’s that kind of minimalist approach that both sets Extremis apart and at the same time causes some problems. Tony seems to have an uncanny knowledge of what he can do with his new powers from the moment he discovers that he has them, an almost Silver Age-like method to storytelling that doesn’t quite mesh with Granov’s decidedly post-modern approach to the artwork. Stretches of silence at other points in the story draw attention to the fact that Granov occasionally reuses certain panels, often several times over, something that tends to annoy me a bit even when the art is really good.

My main problem with Extremis, however, is the way it revises Iron Man’s origin in a series of flashbacks towards the end of the book. Here I find it useful to draw a comparison with the first Iron Man movie, which I think does a far superior job of updating the story than Extremis does. In the movie, as in the character’s first appearance in 1963, Professor Yinsen helps Tony build his first Iron Man suit and then gives his own life to buy Tony enough time to power up the suit and escape. 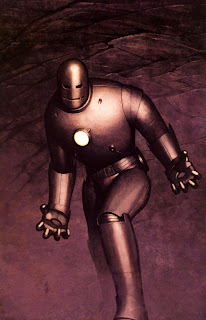 This element of the origin is completely lost in Extremis. Instead, the two men are able to power up the suit without any difficulty, and a flamethrower-equipped Tony proceeds to go on a violent rampage through the terrorist compound. Although Yinsen’s death isn’t seen, it can be assumed that he was killed in the chaos. This version has the twofold effect of taking the heroism and sacrifice out of Yinsen’s actions and turning Iron Man into a mass-murderer, neither of which are true to the spirit of the character’s beginnings. I also don’t like the fact that Ellis changes the place of Tony’s captivity from Vietnam to Afghanistan – the change worked in the movie, in part because the terrorists were established as an ongoing threat for Iron Man to deal with later, but in Extremis the change is little more than cosmetic.

Even with those caveats, though, Extremis nonetheless strikes me as a book that anyone interested in Iron Man should read. It was a guiding force in developing the character into an excellent movie franchise, and for that alone it has cemented an undeniable cultural significance for itself. It’s also worth reading for a better understanding of the core concepts that have driven the character for the past few years. On top of that, it looks great (for the most part), and serves as probably the best starting point for reading about the character’s more recent adventures.