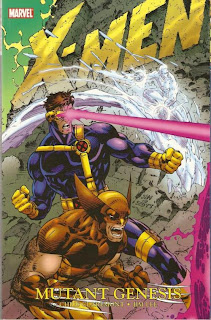 No matter what you think of comics in the 1990s, it’s impossible to deny the influence of Chris Claremont and Jim Lee’s X-Men. The pair had been working together on the Uncanny X-Men series for several years already by 1991, but the launch of a second ongoing X-Men series was, in itself, something altogether revolutionary – as hard as that is to imagine today, with there being certainly no fewer than a dozen X-titles published each month. X-Men #1, with its five different covers (ooh, collectible!) and its darker take on everyone’s favorite team of mutant heroes, was in many ways the springboard for the franchise’s proliferation in the years that followed.

But as much as it was a time for new beginnings, the series also ushered in at least one significant ending. The ‘90s are often seen as a time in which comic book artists rallied to exert more control over the stories they were illustrating – and when they began to feel their efforts being proscribed by writers and editors, the most popular artists abandoned DC and Marvel to found their own companies. X-Men is a case in which the opposite happened, at least at first. That is, with artist Jim Lee increasingly doing whatever he wanted without consulting anyone else first, it was the writer, Chris Claremont, who left the franchise that he had been writing for the previous seventeen years.

It’s a shame, really, because the first three issues collected in X-Men: Mutant Genesis – the only ones written by Claremont – are by far the best in the book. These issues comprise a storyline in which Magneto declares Asteroid M a sovereign state and a haven for Earth’s mutants, sparking an international incident that brings with it the threat of global nuclear warfare. While it’s a long way from Claremont's best X-Men work, it still provides one of comics’ single most fascinating glimpses into the mind of Magneto. Although he’s an antagonist to the X-Men in the conventional sense, with Claremont writing him it’s difficult to view the character simply as a “villain.” In Mutant Genesis, Magneto is a deeply disturbed man who sees the course he has taken as the only way of bringing about peace between humans and mutantkind. It’s really a question of means rather than ends, since his goals are ultimately much the same as Professor Xavier’s.

But the story isn’t perfect. There’s a ridiculous subplot in which it’s revealed that Moira MacTaggert tampered with Magneto’s DNA to try to make him a “good guy,” which leads Magneto to question every decision he’s made in the years since he was in her care. (Of course, if he thought for even a second about his own actions, which include the sinking of a nuclear submarine along with its entire crew, he would realize that neither Moira nor anyone else has been even marginally successful at curbing his actions or mental state over the years.) In the end, Moira’s DNA-tampering / brainwashing process turns out to be little more than a plot device for turning some of the X-Men temporarily to Magneto’s side, leading to a predictable fight with the other half of the team.

Speaking of which, it’s probably worth mentioning who exactly the X-Men are at this point in their history. The first issue opens with the division of the team into two groups, the Blue Team and the Gold Team. Although both are involved in the first story, issues four through seven mainly feature the Blue Team: Beast, Cyclops, Gambit, Jubilee, Psylocke, Rogue, and Wolverine. (Shockingly enough, Wolverine was only an active member of one group of X-Men at this point!) If you ever watched the animated X-Men television show that ran throughout the ‘90s, then you essentially know these characters.

Forge and Banshee (two personal favorites of mine) also appear in supporting roles, although Banshee’s part is minimal after the third issue, in which Gambit breaks his jaw. It’s not too long before Gambit’s presence starts to get really annoying, actually; he’s a stupid character, pure and simple, and what I’ve found over the years is that most people who think otherwise are working from fond memories of the animated show. In the comics, the character is an unlikeable jerk, and I can’t say I would mind if I never saw him in the pages of a comic book again.

Fortunately, Gambit’s role is pretty minimal in the second half of Mutant Genesis, a Wolverine-centric story that pits the team against Omega Red – a multi-tentacled Soviet super-soldier who’s been in suspended animation ever since he fought with Wolverine thirty years earlier. These issues are plotted entirely by Jim Lee, with John Byrne and Scott Lobdell simply writing the scripts. The story and writing suffer as a result, although the comic never descends into anything near the depths of idiocy the entire X-Men franchise would be reduced to in just under four years’ time. I’m actually tempted to say that this is the franchise at its ‘90s peak, which is entirely true, but I’m afraid of that coming off as too much of a compliment; instead, let’s just say that things only went downhill from here.

In fact, you can already see things turning sour in the Omega Red story. In addition to the plot, which is fairly by-the-numbers (although it does introduce Maverick, a character I’ve always been strangely captivated by), the art too shows signs of slipping. Perhaps it’s just that Lee was more rushed for these issues, but his work seems less like his own and more like he’s trying to channel the influence of other popular artists from the time. As a result, you can expect about ten times as many popping neck veins and constipated-looking facial expressions.

The back of Mutant Genesis includes a cover gallery and some sketch pages by Lee, as well as some truly awful art by Jeff Matsuda that was commissioned to balance broken spreads in earlier printings of the trade. I can’t even imagine how jarring it would have been to see these pages in the middle of the story; Matsuda would go on to design characters for such animated shows as The Batman and Jackie Chan Adventures, which should give you a pretty good indication of how poorly his art style meshes with Lee’s.

A new hardcover edition of Mutant Genesis came out just this week, and its page count is slightly higher than that of the trade paperback. Since the issues collected are the same, though, I can’t imagine the differences amount to anything substantial – probably just a few pages of original pencil art and a couple of additional covers. Either way, you’re essentially getting the same product. And it’s a product worth looking into, if you’re interested in seeing the passing of the torch (or, to be more accurate, the dying of the flame) in regards to the X-Men franchise, or even if you just want a better idea of the slippery slope the comic book industry in general was treading in the early 1990s. But if you’re coming at it simply with the expectation of being entertained, rather than learning something about a period that was (like it or not) crucial in comic book history, I recommend approaching with caution.