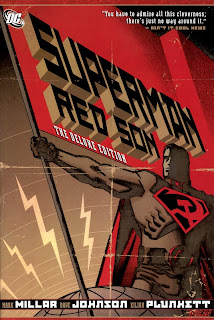 What if Superman’s rocket had landed on a farm in the Ukraine rather than one in Smallville, Kansas? What if he had been raised not in the spirit of “truth, justice, and the American way,” but had been molded instead into the poster child of communist Russia under Stalin? These are the questions to which writer Mark Millar seeks answers in Superman: Red Son, and with the help of artists Dave Johnson and Kilian Plunkett, he pulls it off tremendously.

Millar’s first and most resounding success in this book is that he doesn’t take the story in the course that you would probably expect based on the premise alone. This isn’t some super-patriotic, down-with-communism propaganda piece in the vein of Red Dawn or any of its brainless ilk. Rather, Millar uses Superman’s eventual role as leader of the Soviet Union as a platform from which to explore an even more basic question than the ones that opened this review: what would Superman do if he ruled the world?

Tying into that question, of course, is the issue of whether or not Superman should rule the world – something the character struggles with throughout the book. He’s not a villain, at least not in his own view and not from the story’s perspective. In fact, he initially has the same unselfish, non-political goals that Superman does in the main DC universe. In his mission to achieve world peace, though, he becomes what amounts to a world dictator, even going so far as to have his dissenters essentially lobotomized. The road to hell is paved with good intentions, as the saying goes, and that’s certainly where the world has gone by the end of the book.

The main character’s role as authoritarian leader results in some interesting inversions of classic DC concepts. In the world of Red Son, Lois Lane is married to Lex Luthor (brilliant inventor and, later, president of the United States), Hal Jordan wields his Green Lantern ring as a military weapon, and Batman is a terrorist trying to subvert Superman’s regime. The evolution of Luthor’s character is particularly interesting, and it begs the question: what kind of man could he have been in this reality if not for Superman’s existence?

The fact that there are significant differences from regular DC continuity doesn’t come as a huge surprise, in and of itself. Many of DC’s Elseworlds (alternate universe) stories focus almost solely on how they differentiate themselves from the main universe, relying on the “clever” ways they shuffle around basic concepts to entertain readers. (Sarcastic example: wow, Robin is a woman in such-and-such reality? How original!) Admittedly, there’s a bit of that in Red Son – in one scene depicting a Daily Planet office party, for example, we’re treated to some embarrassingly “hey kids, look at me!” appearances by Oliver Queen and Iris Allen.

Millar keeps those kinds of moments to a minimum for the most part, though, and his focus is less on making a spectacle of the tweaks he’s made to ordinary continuity than it is on giving his universe the room to live and breathe in its own right. Luthor’s determination to destroy Superman, for instance, is developed in an entirely believable way that makes him distinct from the main DC universe’s Luthor. Most importantly, his motivations make sense without relying on the reader’s preconceptions about the character simply being “evil.”

But as good as the main story is in Red Son, the book’s ending is what really blew me out of the water. To compare the book (once more) to the vast majority of Elseworlds titles, this one doesn’t simply pack up and go home once it’s used up all its tricks, leaving us to wonder what happens to the characters after the story ends. Instead, Millar closes with one of the most intelligent and self-reflexive surprises I’ve ever seen at the end of a superhero comic, one that’s sure to bring a wide smile to new and long-time readers of Superman alike.

The art in this book is quite good, and the best way I can think of to describe it is as a mash-up of sorts between Paco Medina and early Leinil Yu. Penciling duties are handed over about halfway through the book from Johnson to Plunkett, neither of whom I was familiar with prior to Red Son. I’m not sure of the specific reasons for the change, although some handwritten comments on one of the bonus sketch pages at the end of the book lead me to believe that it has something to do with Johnson being a fairly slow artist. It isn’t a detriment to the book, though; in fact, the shift is so seamless that if you weren’t paying attention, you might not even notice.

As far as purchasing Red Son (which I heartily recommend doing) goes, the Deluxe Edition is the way to go. The book is of a decent size – it’s three issues long, but each issue is about twice the length of a standard comic book – and, as I mentioned earlier, it has a few pages of sketches and concept designs at the end, including several by Alex Ross. It’s a pretty nice package, overall, which is only befitting of one of the best Superman stories, alternate universe or not, published in the last ten years.