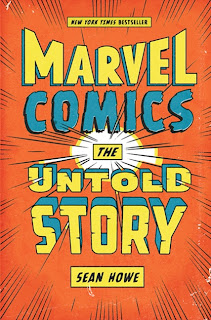 Most published histories of Marvel Comics have been decidedly narrow in their scope. Several have focused on Stan Lee, Jack Kirby, and the superhero explosion of the early 1960s; others, like the Marvel-endorsed Marvel Universe and Marvel Chronicle, have centered on the evolution of the company’s characters and continuity. One book, Dan Raviv’s Comic Book Wars, has been written about Marvel’s legal wranglings in the 1990s (including its two years of bankruptcy and eventual sale to Toy Biz), and to my knowledge, it’s the only book to devote itself fully to a single period in Marvel history other than the 1960s. No other book has attempted to look as broadly (or as candidly) at the company’s business practices, publishing strategies, and editorial philosophy as Sean Howe’s Marvel Comics: The Untold Story.

The enduring figures that emerge in Howe’s book aren’t fictional characters like Spider-Man, Captain America, and the Hulk, but real-life personas ranging from Lee, Kirby, and Martin Goodman in Marvel’s early years to Steve Gerber, Chris Claremont, Frank Miller, and Jim Shooter (among many others) in more recent ones. Of course, Marvel has published so many comics, and its characters have been the focus of so many cross-media tie-in products (ranging from action figures to billion-dollar movie franchises), that it would take far more than one book to detail the entirety of the company’s output. A book like this must utilize some principles of selection to narrow its focus, in other words, and the ones Howe chooses are fairly transparent: the longest and most detailed sections of the book cover the 1970s comics – written and illustrated by a motley crew of acid-trippers that included Gerber, Jim Starlin, and Steve Englehart – which introduced Howe to comic books when he was young.

At other times, though, Howe’s focus seems more arbitrary, and he makes some startling omissions. For example, there is little discussion of Marvel’s forays into licensed properties like Conan the Barbarian, Transformers, He-Man, and the Micronauts during the 1970s and 1980s. Even the acquisition of the Star Wars license merits a mere half a page, with no follow-up on Marvel’s subsequent exploitation of the franchise or the manner in which the company ended up dropping most of its licenses by the early 1990s. And while Howe is quick to point out Marvel’s penchant for allegorizing real-world issues during the 1960s and ’70s, he fails to comment on the often frighteningly conservative nature of so many comics that attempted to do the same in the 1980s, ranging from Secret Wars to The ’Nam (which briefly toppled The Uncanny X-Men, one of the comics Howe discusses most, as the industry’s highest-selling comic book).

In the end, although it’s respectable on the one hand that so much information on Marvel’s history has been gathered in one place, Howe actually tells us fairly little that hasn’t been “told” at some point before. There are even places where he uses misinformation to construct the “story” he wants to tell; Jack Kirby’s tale about encountering a crying Stan Lee as movers carried furniture out of the Marvel offices, for instance, has long been considered apocryphal. It certainly aids Howe in his aim to undermine Lee whenever possible, though, as well as in his characterization of the Lee/Kirby relationship as little more than a decades-long feud.

The book’s almost immediate status at the time of its publication as Marvel’s “definitive” history is interesting, since Howe’s book probably tells us less about Marvel’s history than it does about prevailing opinions toward Marvel (and mainstream superhero comics in general) today. In fact, with its focus on the battles fought between writers, editors, and corporate management, Marvel Comics: The Untold Story actually emerges as a sort of vague protest on behalf of creator rights. The ethics of staging such a protest in a book like this are complicated, though – more complicated, I think, than Howe seems to want to acknowledge. That’s especially true when it comes to his characterization of individual creators as essentially either saints to be pitied or sinners who deserve every lick they take – as people who have either “earned” or forfeited their rights as creators, by virtue of the quality of their work.

Howe’s heart may be in the right place, but linking a creator’s rights with the “quality” of his or her creations, even implicitly, is problematic – not just because “quality” lies in the eye of the beholder, but also because Howe often equates quality with sales figures. (It’s for this reason, I assume, that Howe feels comfortable heaping praise on creators like Frank Miller, despite the casual misogyny inherent to even the “best” of Miller’s work.) Accounted for this way, the efforts of writers and artists are of merit only in proportion to their contribution to an employer’s bank account. Sadly, this is an attitude toward creator rights tacitly espoused by a huge percentage of readers and even creators today, who are either unwilling or unable to stand up for the rights of artists and writers – or even for such universally acclaimed figures as Jack Kirby, Jerry Siegel, and Alan Moore – when they (or their estates) are deliberately and blatantly wronged by Marvel and DC.

If this argument seems far-fetched, or overly cynical, then consider the example of The Avengers, the 2012 film directed by Joss Whedon. Whedon was paid more to write and direct the film than Kirby was paid by Marvel in his lifetime (and Whedon will be paid even more to work on the sequel), despite the fact that Kirby co-created nearly the entire cast of characters and toiled on the stories Marvel’s films are largely based on for nearly two decades, in some cases. Furthermore, unlike Whedon, Kirby’s name did not appear in the film’s marketing and only appeared in its end credits after controversy was raised over reports of its absence. All of these things were apparently non-issues for casual filmgoers (most of whom likely were not aware of them) or even, more surprisingly, for long-time fans in a better position to know the facts; with a worldwide gross of over $1.5 billion, The Avengers remains the third highest-grossing film of all time. Amidst its success, it was Whedon, not Kirby, who got the credit (and the paycheck).

Whedon is an exception to the rule, though; Avengers was destined for financial success, with or without him. The film was heavily marketed as “Marvel’s The Avengers,” reinforcing a disturbing perception that has entered the public consciousness in the last several years. This perception, aggressively fostered by movie-marketing campaigns but nonetheless bought into (literally) by movie-going audiences, is one of Marvel and DC not as corporations, but as the literal authors of the adventures of their franchised characters (again – “Marvel’s” The Avengers). This is the precise mentality which proponents of creator rights have long struggled to combat, and which threatens constantly to absorb the ideas of so many writers and artists within the ever-widening corporate maw that has already swallowed up so much of America’s intellectual property.

But, more to the point, it is a mentality which histories like Howe’s, in spite of its author’s seemingly good intentions, subtly reinforce. This is perhaps most obvious in the book’s title, which claims “Marvel Comics” (not “the creators of Marvel Comics”) as the subject of its “untold story.” However, it comes through even more clearly in the book’s final chapter, a sparsely written apologia for the last decade of Marvel’s cultural output which ends not with a discussion of the creators, but of their creations. “Multiple manifestations of Captain America and Spider-Man and the X-Men float in elastic realities, passed from one custodian to the next,” Howe writes, discussing the pervasiveness of the characters across all forms of media, “and their heroic journeys are, forever, denied an end.”

With these lines, Howe abandons his sympathetic tone toward comics creators, who are now figured as the mere “custodians” of their own creations. And while on the one hand Howe’s final discussion of Marvel’s focus on corporate synergy is hyper-critical of the company's business strategies, the author ultimately locates tragedy not in the ways the company’s architects have been creatively straitjacketed and legally mistreated over the years, but in the fact that a collection of corporate-owned, fictional characters will never receive a proper end to “their” stories. In the end, Howe asks us to feel moral outrage on the part of multi-billion-dollar franchises rather than for the men and women who built them from the ground up, many of whom have died (or are currently dying) completely impoverished, forced to turn to fans on the Internet for help paying their medical bills.

And so, as with “Marvel’s” The Avengers and so many other examples we might draw from popular culture today, the torch of moral ownership is passed smilingly from creator to corporation. The seduction of Howe to this attitude, despite his affection for the individuals whose creative efforts have resulted in the rich history he celebrates, may well be indicative of more than the failings of a single historian. Indeed, it may point to the ultimate inability of our culture to resist the constant sensory bombardment, staged by multimedia corporations, which we face, morally and intellectually, on a daily basis. It is a frightening world, in which corporations can be popularly imagined as both the legal and moral owners of intellectual property, and in which the obligations we perceive to fictional characters and their corporate masters take precedence over our obligations to other human beings.
Posted by Marc at 3:00 PM