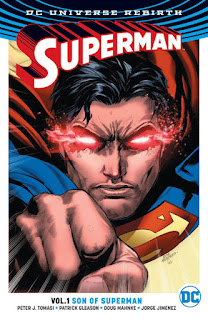 In the months immediately preceding DC’s Rebirth initiative, the publisher decided to kill Superman – this time for good. The catch was that the Superman to be killed off was the version introduced as part of 2011’s New 52 relaunch, which had effectively pushed the reset button on the DC Universe and “permanently” replaced the characters readers had been following since 1986 (when Crisis on Infinite Earths had similarly restarted the DC Universe) with new, younger versions unburdened by decades’ worth of continuity. The New 52 Superman had never been as well-received as the post-Crisis version, though, and with Rebirth – which is basically an attempt to reinvigorate the New 52 Universe by infusing it with pre-New 52 concepts – the publisher has (again, “permanently”) replaced the New 52 Superman with the post-Crisis Superman.

Luckily, Superman, Vol. 1: Son of Superman doesn’t make this convoluted backstory too hard to understand, and writers Peter J. Tomasi and Patrick Gleason do a succinct job of explaining the post-Crisis Superman’s return. Having escaped from his own universe just before it was destroyed, he’s simply been hiding out in this one for the last ten years; now, with the New 52 Superman having died in battle, he’s decided to take up the mantle again because, as he puts it, “the world needs to see again that there’s a Superman looking out for them.”

Unlike the first appearances of the New 52 Superman back in 2011, Tomasi and Gleason’s Superman takes time to pay tribute to the status quo it’s upheaving. This first volume’s opening pages, collected from the Superman: Rebirth one-shot, feature the post-Crisis Clark Kent’s attempts to resurrect the New 52 Superman by the same means he was brought back to life following his own death in 1992’s The Death of Superman (an event beautifully recapped, in flashback, by artist Doug Mahnke). He fails, since the “regeneration matrix” device that revived him apparently doesn’t exist in this universe, although it’s hard to buy that this is actually the last we’ll see of the New 52 Superman (this being superhero comics, after all).

Superman #1 continues to look back at the pre-Rebirth status quo, with Clark paying his respects at the New 52 Superman’s grave, but the past quickly fades into the background in Tomasi and Gleason’s series. Instead they focus on what’s arguably the most novel aspect of the return of the post-Crisis Superman: the fact that this Superman is a family man, his longstanding relationship with Lois Lane (who has also made the trip to the New 52 Universe) having produced a roughly ten-year-old son. These concepts were actually introduced not in Tomasi and Gleason’s series, as I had assumed going into this book, but shortly before DC Rebirth, in Convergence and Superman: Lois and Clark. It’s a testament to how well-written Son of Superman is that, even without having read either of those series, I felt at home with these characters – especially the young Jonathan Kent, who officially becomes the new Superboy by the end of this volume – something I haven’t been able to say about contemporary DC comics in a very long time.

Clark Kent’s interactions with his wife and child – who both, refreshingly, are in on the secret of his superpowers and share in his mission to protect and serve the greater good – are as natural as they are original to this franchise. In fact, they humanize Superman in a way rarely seen since the introduction of the New 52 Superman. In that sense, it’s hard not to read the book’s main conflict – in which a new version of the Eradicator (a Kryptonian Robocop, basically) is trying to “purify” Jonathan by, um, “eradicating” the human half of his DNA – as a critique of the various series starring the New 52 Superman, which arguably emphasized the character’s less relatable Kryptonian side to the detriment of his more down-to-earth human alter ego. It’s a compelling metaphor, although it becomes increasingly strained after it’s revealed that the Eradicator’s body somehow contains the soul of every dead Kryptonian (and also, for some reason, the soul of Pa Kent…?). But for as much as the last few issues collected in Son of Superman may lose sight of that central metaphor, the book remains both readable and endearing throughout.

The book owes a lot of its consistency to artists Gleason, Mahnke, and Jorge Jimenez, who trade off between issues with some frequency due to the series’ twice-monthly shipping schedule. All three make effective use of shadows and panel layouts, and every issue ends with a splash page (or, in the case of one issue, a splash page with a single inset panel). Their renderings of Jonathan are also totally of a piece, which is to say the character doesn’t appear to fluctuate in age from issue to issue the way child characters in superhero comics often seem to do (Damian Wayne, anyone?). It goes a long way toward establishing Jonathan as a fully-fledged character in the DC Universe, which I found to be Son of Superman’s greatest achievement.

The DC Rebirth Superman series is off to a great start with this volume, and I hope DC doesn’t intend to back down from the character’s new, family-oriented status quo anytime soon; combined with the post-Crisis Superman’s status as an outsider in the New 52 Universe, it opens up a lot of familiar ground for productive reexamination. There’s Superman’s relationship with the Justice League, for example, which makes for a pretty big question mark at the end of this volume as Superman introduces Jonathan to Batman and Wonder Woman – not his Batman and Wonder Woman, remember, but the New 52 versions of those characters (who have just experienced the death of their Superman and the sudden appearance of a new, older Superman from another universe!).

But most significantly – and most uniquely, for a contemporary superhero comic – Son of Superman sets out to explore how qualities like honesty, responsibility, and empathy are passed from one generation to the next. In a time when those qualities are so sorely lacking in people with power, books like this one remind us that there is, indeed, a Superman looking out for us. He resides in the better part of our natures, and his humanity, ironically, is a vital reminder of the strength we all possess.
Posted by Marc at 9:00 AM