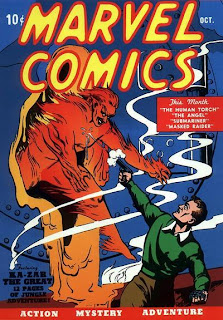 I can hardly believe that it’s already been a year since I started this blog! If the timestamps are to be believed, though, it was indeed one year ago today that I posted my first review, in which I spotlighted one of my favorite collected editions, The Amazing Spider-Man Omnibus, Vol. 1. Since then I’ve written and posted an additional 40 reviews, begun an annotated timeline of Marvel’s collected editions (more on that in a minute!), and made some great friends in the online comic book community. I’d like to thank everyone who has contributed to this blog in some way over the last year, whether you’ve read a review, left a comment, or browsed the timeline. I never imagined that I would accomplish so much at With Great Power in only a year, and I owe it to you guys.

But enough with the sappy stuff. It wouldn’t be an anniversary if we didn’t celebrate somehow, right? So in honor of the occasion, I’ve made the biggest update to the Marvel TPB Timeline ever. The timeline now begins with the first issue of Marvel Comics in 1939 and goes all the way up to the start of the Secret Invasion crossover in 2008. I’ve done my best to make the information provided on big storylines like House of M and Civil War as understandable as possible, so I hope you enjoy those sections. (On the other hand, if you think I could do better, feel free to let me know – I’m always looking for new ways to improve the timeline!)

I didn’t ignore the period of time (1970-2005) that had already been covered, though. It’s been overhauled with new and more accurate annotations for many books, information on a variety of out-of-print collected editions (including the original Onslaught and Kurt Busiek Avengers trades), and books from Marvel’s most recent batch of solicitations. In other words, pretty much everything published in Marvel’s first 70 years is on the timeline! Of course, that doesn’t mean my work is even close to being done – the next step is to get the timeline totally caught up to the present day, and beyond that, I have a few other cool ideas. They’re a little too far off to talk about in much detail yet, but I’m pretty sure you’ll like ’em!

So that’s what you can expect in the immediate future in regards to the timeline, and it’s exciting stuff, to be sure. What about reviews, though? As you’ve probably noticed, those have been a bit less frequent in recent months than they used to be. The simple reason for that is that I’ve been so busy lately that it’s been hard to find the time to read, much less review, very many comics. For the next month, at least, the reviews will probably continue at a rate of about one every other week, although I may occasionally be able to post a review on off-weeks. In May, though, I hope to really get back into the reviewing groove and to make up for lost time with extra reviews on top of the planned weekly ones. Also, as I’ve mentioned before, I’ll be doing a creator-focused month during the summer, which I think will be a lot of fun. Who will the creator (or creators) be, you ask? That’s still a secret… although I can tell you that the books have already been picked out!

That’s about it for now. Thanks again for stopping by, and as always, if you have comments, questions, or feedback of any kind, you can either leave a comment here, email me at marveltimeline@gmail.com, or follow me on Twitter (@Dief88)!
Posted by Marc at 4:20 AM