Some Thoughts on Collecting Venom 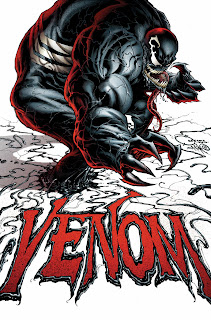 While I haven’t been an avid buyer of individual comic issues for a few years now (other than Amazing Spider-Man, which I still follow religiously), today I decided to pick up the first issue of Marvel’s new Venom series, written by Rick Remender and penciled by Tony Moore. It’s a pretty decent comic, as it turns out, although I don’t know that I’ll continue to buy it in single issue form. But this post won’t be too concerned with the actual content of that comic – instead, I’d like to talk about something interesting I noticed on the letters page, which for this first issue is simply a column written by the book’s editor, Stephen Wacker.

He begins by discussing a bit of Venom’s publishing history, emphasizing that Venom #1 is the 90th issue to star everyone’s favorite brain-munching alien symbiote. (In other words, you can expect the book to change its numbering for a “100th issue extravaganza” in just under a year!) Then – and this is what I find most interesting – he recommends several collected editions for readers who would like to learn more about the character: 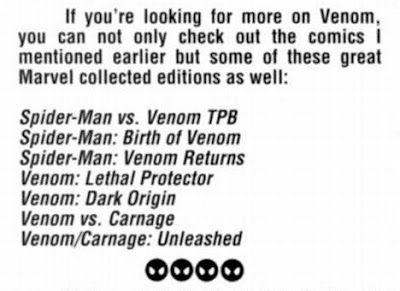 What’s so interesting about this, you might ask? Well, of the seven trades Wacker recommends, four of them are actually out of print – and I don’t mean recently out of print, but for more than ten years in some cases! Let’s take a look at each of the trades in Wacker’s list, starting with the first one; throughout, I’ll discuss some of the list’s problems and end with a few suggestions on how Marvel might address them. 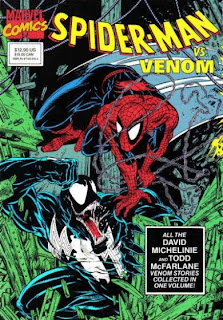 was an extremely popular trade in the nineties. Originally published in 1990 and collecting a handful of issues written by David Michelinie and penciled by Todd McFarlane, it went through at least six printings and was even named one of Wizard Magazine’s top 100 trade paperbacks in 2006. It was out of print by the early 2000s, though, and in 2007, Marvel collected the full contents of Spider-Man vs. Venom (along with the contents of the out-of-print trade Spider-Man: The Saga of the Alien Costume

) in Spider-Man: Birth of Venom

, a trade which is still in print today. Although Birth of Venom is a little expensive, I would still recommend it – although that’s mostly for the Saga of the Alien Costume issues, which come from one of my favorite eras in Spider-Man history. But since Spider-Man vs. Venom is included in full in Birth of Venom, Wacker is essentially repeating himself by listing both.

collects the next two storylines to feature Venom, written again by Michelinie and penciled this time by Erik Larsen. Published in 1993, this trade is also out of print, but unlike Spider-Man vs. Venom, its contents have never been re-collected. Priced originally at $11.95, a new copy of this trade will run you over $30 today, if not even more; one Amazon seller is currently charging $115. That makes Venom Returns pretty much the opposite of “accessible” for people interested in reading up on Venom’s history. 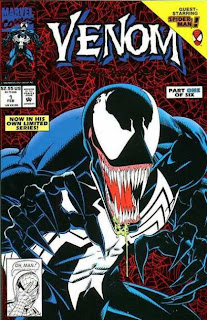 collects the 1994 miniseries of the same name, written by Michelinie with art by Mark Bagley and Ron Lim. This trade is out of print too, and even less affordable than Venom Returns. I had to do a double-take when I saw it mentioned, to be honest, because this trade is known for being notoriously difficult to find at a reasonable price, even used. Amazon has used copies ranging from $25 to over $150, and one new copy for sale at $85. Why such high prices? I imagine it’s because the trade had a fairly low print run (collected editions weren’t always as popular as they are today, remember), plus it collects what is undoubtedly the best Venom miniseries from the nineties. It’s worth reading if you can get your hands on it affordably, but it’s definitely not worth the exorbitant price that many sellers are currently charging.

The next two trades that Wacker mentions, Venom vs. Carnage

, are collections of fairly recent miniseries and are still in print. I wouldn’t expect Venom vs. Carnage to be easily available for much longer, though, being the older of the two and having been released at a fairly low price point. I could very easily see Marvel re-releasing it as a Marvel Premiere hardcover for twice the trade’s price in a year or two. 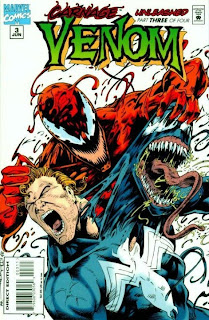 This brings us to the final trade on Wacker’s list, Venom: Carnage Unleashed

(which Wacker mis-identifies as “Venom/Carnage: Unleashed”). Written by Larry Hama and penciled by Andrew Wildman and Art Nichols, this is one of the better Venom miniseries to come out of the nineties, but it’s still a bit on the mediocre side. It’s also the second-most difficult trade on the list to find, behind Lethal Protector. The lowest price currently listed on Amazon for a used copy is just under $20, with other used copies at closer to $100; the only new copy listed is priced at $60.

As we can see, then, Wacker’s list of Venom trade recommendations is pretty problematic, not because of the quality of the books themselves, but because most of them haven’t been available at a reasonable price for years. That isn’t Wacker’s fault, though, and I certainly don’t mean to seem like I’m attacking him. The fact that this is the best list he could come up with actually speaks more to a failure on the part of Marvel’s collected editions department than anything else. You would think, with a brand-new series coming out starring a character as popular as Venom, that Marvel might take a bit more initiative in making sure that more than two or three trades starring that character were readily available. 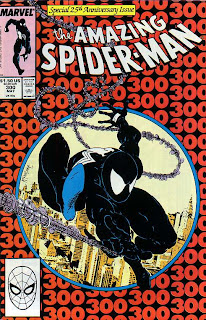 I do have to give the trade department some credit, though. Just this month, Marvel released Venom by Daniel Way Ultimate Collection

, which collects the entirety of Way’s eighteen-issue ongoing Venom series from the early 2000s. It was also announced last month that Marvel would publish an Omnibus edition collecting the entire Michelinie/McFarlane run on Amazing Spider-Man (during which Venom made his first appearance, in the issue pictured at right). Strangely, though, neither of these books appears on Wacker’s list; nor does Spider-Man: Maximum Carnage

, an important Venom-related story which, unlike many of his recommendations, is actually in print.

With the exception of the Daniel Way trade, all of the books I just mentioned collect Spider-Man comics in which Venom happened to appear. But what about the 89 comic books starring Venom that Wacker talks about in his column? Much like what’s happened with the Clone Saga over the last few years, I think a good deal of nostalgia for these comics has built up lately and that there’s a viable market for reprints of these issues. I, for one, would certainly be interested in buying a series of Venom Classic trades collecting the character’s various series from the mid-nineties. After all, if Gambit, War Machine, and the Danny Ketch version of Ghost Rider are worthy of Marvel’s “Classic” line, why not Venom?

So what do you think? Has Marvel really done a poor job of collecting Venom over the years, or am I giving them the short shrift? And while we’re at it, what are your favorite Venom storylines, and which ones would you like to see collected (or re-collected)? Feel free to leave a comment or send me an email at marveltimeline@gmail.com with your thoughts!
Posted by Marc at 1:15 AM