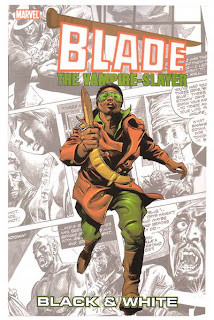 For fans of the Blade movies or the character’s other recent depictions in various animated series, video games, and even a short-lived live-action TV show, Blade: Black & White is likely to be a bit baffling. Collecting a rather strange hodgepodge of issues from throughout the decades, this book sticks with stories that portray a more “classic” version of the character than most people are probably used to seeing these days. Unlike the movie and TV versions, the original version of Blade was an afro-sporting, goggle-wearing, occasionally jive-talking black British vampire hunter. In other words, Wesley Snipes in a trench coat and sunglasses this character is not.

And while I’m sure I could appreciate such a “far out” character under the right circumstances (in fact, I do enjoy Blade’s 1970s appearances in Tomb of Dracula), the stories in this volume just didn’t really do it for me. One of the biggest problems, in my opinion, is that the writers don’t play up Blade’s inherent wackiness nearly as much as they should. Especially in the first few issues (a multi-part story that takes up the first half of the book), written at first by Marv Wolfman but then taken over by Chris Claremont, the mood is simply too gloomy for its own good. Blade’s first solo outing after a handful of guest appearances in Tomb of Dracula (a title which Wolfman was also writing at the time), the tale follows Blade’s adventures in London as a coven of vampires attempt to take over the city.

Here we see Blade’s origin recounted for the first time, albeit so confusingly that I didn’t even realize (until I had done some research) that this story wasn’t simply recapping some other comic that I hadn’t read. The story drags on for much too long, pulling in a variety of useless characters, including Blade’s exotic dancer girlfriend Safron and a barely-clothed female cop, who serve as little more than vampire food and/or hostages for Blade to rescue. It’s unbearably formulaic at times, with each fight between Blade and the vampires playing out in almost exactly the same way. Even the vampires apparently realize this partway through the story and, deciding that it would be too much trouble to keep trying to kill Blade, they settle on framing him for a child murder instead. (At least it’s original, anyway.)

The worst part, though, is that the reproduction for this first storyline is simply awful. As the title makes clear, this trade is a collection of black and white comics, and in this case the stories come from several issues of Marvel’s ongoing B&W horror magazine Vampire Tales. (A big chunk of the story also comes from an issue of Marvel Preview; I suspect these chapters were shunted out of Vampire Tales when someone at editorial realized how extraordinarily dull they were.) The standard practice for black and white collections like this one is for the company to reproduce the art from the original pencils and/or inks, but here it looks like Marvel has decided that poorly xeroxed copies of the original magazine pages will do instead. The linework is so washed out in places, in fact, that the action becomes utterly incomprehensible.

The second half of Blade: Black & White fares a bit better than the first. Immediately following the Wolfman/Claremont issues is a Wolfman-written issue of Marvel Preview with absolutely beautiful art by Gene Colan, who has been called the master of depicting shadow and light in comics, and not without good reason. Freed from Claremont’s penchant for overwriting and melodrama, Wolfman delivers a pretty interesting story here in which Blade comes face to face with a group of child vampires; sadly, the story is only six pages long.

The next story, a 12-page inventory piece published in the 1997 one-shot Marvels: Shadows & Light, is another success. James Felder’s plot follows Blade as he teams up with a local priest to infiltrate Dracula’s castle to finish off his archfoe once and for all. Although Ladronn’s style is much more akin to the likes of Mike Allred than Gene Colan, he manages to pull off an incredibly atmospheric feeling nonetheless. The setting is regal and spooky at the same time, and reminded me in a lot of ways of Castlevania (which just so happens to be my favorite video game series!). Strangely enough, the story ends on a horrifying cliffhanger, one that I don’t believe has ever been addressed since.

Colan returns on art duties for the trade’s final issue, a 1998 one-shot entitled Blade: Crescent City Blues which finds Blade and his old friend Hannibal King pitted against their old enemy Deacon Frost. The vampire directly responsible for the death of Blade’s mother, Frost is now leading his undead legions in an attempt to take over organized crime in New Orleans. (I can’t remember exactly what the rationale behind his plot was, but whatever it was, it didn’t strike me as particularly compelling.) Colan’s artwork, while not bad by any means, unfortunately isn’t as well-done as his earlier story; that, plus the fact that the story requires a bit of outside knowledge regarding some of Marvel’s lesser-known supernatural characters (including King, Frost and Doctor Voodoo), placed this one in the slightly-below-average category for me.

So, in the end, there were only 16 pages of Blade: Black & White (out of 144) that I legitimately enjoyed. But although I can’t recommend it at full price, it may be worth noting that I frequently see the book listed online for about the same price as a standard comic book issue. If you do come across it for that price, it’s probably worth considering – after all, if you end up liking Crescent City Blues more than I did (and really, I didn’t think it was too bad), that’s another 40 pages of potential enjoyment. If melodramatic Marvel vampire comics don’t sound like your bag, though, I’d have to say skip it.