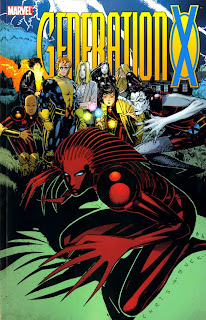 “The Phalanx Covenant” was the first modern comic book story I ever owned in its entirety. I still remember, at some point in the late ’90s, randomly stumbling across the issues (along with some of the earliest issues of the Clone Saga) buried amidst a stack of other books in the back corner of a KB Toys. The store gave them to me at some insane discount since the comics didn’t have a price tag, and I was instantly hooked. It wouldn’t be a stretch to say that the crossover was my gateway drug into superhero comics – not long after reading it, I went to the local comic store and started my first monthly pull list.

For that reason, as you can probably imagine, “The Phalanx Covenant” holds a special place in my heart. So does Generation X, the series that spun out of the crossover (which, not coincidentally, was also the first series I ever actively sought out in back issue form). So when Marvel announced the first volume of a Generation X Classic trade series, I was a lot more excited than I imagine the news really warranted. Still, I was a bit apprehensive about revisiting these stories – we can all come up things we enjoyed when we were younger that don’t exactly withstand the test of time (The Goonies, I’m looking at you!), and I didn’t want this to be another one.

For the most part, though, my fears were unwarranted. The issues of “The Phalanx Covenant” collected here actually hold up really well, and while they’re not perfect, they’re worlds better than most early to mid-’90s X-Men comics. For those unfamiliar with the story, it was unlike most other line-wide X-Men crossovers at the time in that it didn’t require you to read every single tie-in issue – in fact, “The Phalanx Covenant” was really a grouping of three separate but interrelated mini-crossovers, all of which address different (but related) events that happen to take place at the same time. 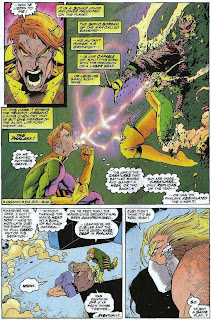 Just one of these three mini-crossovers, “Generation Next,” is collected in Generation X Classic, Vol. 1, which I think is actually a pretty smart decision on Marvel’s part, since it’s the only part of “The Phalanx Covenant” that really has any relevance to the beginning of Generation X. (All three parts do appear in the out-of-print trade X-Men: The Origin of Generation X, which I’ll be looking at in much more detail soon.) The four-part story, taking place across two issues each of X-Men and Uncanny X-Men, features the sonic-screaming Irish mutant Banshee and former X-villain Emma Frost in their attempt to track down a group of kidnapped teenage mutants. They’re also joined by Jubilee and Sabretooth – the latter of which, perhaps because he isn’t one of the story’s main focuses, actually doesn’t annoy me here.

The young mutants’ captors are the Phalanx, a group of techno-organic beings that share a collective consciousness and a hatred for all purely organic forms of life, especially mutants. Their motivation in this part of “The Phalanx Covenant” is to experiment on young mutants in order to determine why the Phalanx are unable to absorb people with mutant DNA into their hive-mind, the way they can with normal humans. Artists Joe Madureira and Andy Kubert draw a number of great fight sequences, but the story isn’t wall-to-wall action and that’s what I really like about it. Since the majority of the X-Men are out of the picture (they’ve also been kidnapped by the Phalanx, but their rescue is detailed in a different “Phalanx Covenant” mini-crossover), there’s plenty of time to be spent developing Banshee, Emma, and all of the newly introduced young mutants. The story ends on a heart-breaking but hopeful note, setting the stage for the new mutants to form the team Generation X, with Banshee and Emma serving as their mentors.

Immediately after “Generation Next,” we get a never-before-collected issue of Uncanny X-Men that serves as a bridge from “The Phalanx Covenant” to the first issue of Generation X. It’s the kind of rare “quiet” issue that I tend to enjoy quite a bit in team books, with characters just talking to one another and trying to come to emotional grips with recent events in their lives. In this case, the story focuses mostly on Jubilee as she prepares to leave the X-Men behind to join up with Generation X. Although it probably would have been more moving had Wolverine been present, given his role as a mentor to Jubilee over the years, the issue is still a fitting coda to her time with the team and a welcome inclusion in this trade. 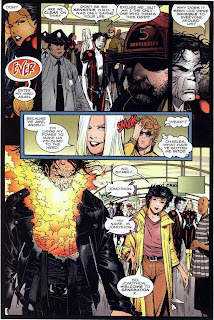 Next, we finally enter into the Generation X series proper. By this point, we’ve already been introduced to the main cast of characters: Husk, a Southern girl with the power to shed her skin; Synch, who has the ability to emulate the powers of those around him; M, a super-strong girl with a big brain and an even bigger ego; Skin, an angry Mexican-American with a shady past who can, fittingly, stretch his skin (sort of like a less versatile Mr. Fantastic); and Jubilee, the former mall rat who can emit biokinetic fireworks.

Over the course of the first few issues, the team is also rounded out with Chamber, a moody British telepath who has been horribly disfigured by his near-uncontrollable energy powers, and Penance, a mute girl with razor-sharp red skin. (Mondo, another young mutant who joins Generation X fairly early on, appears only fleetingly in this volume.) The team even gains an archnemesis right off the bat in the form of Emplate, a genuinely menacing villain with a penchant for draining the life from young mutants, and who seems to have a mysterious connection to several of the main characters.

Before the first issue is even halfway through, the essence of each character’s personality has already been incredibly well defined. In fact, I doubt it’s possible to make it through the first half of this book without having already chosen a new favorite character or two. For me, it wasn’t actually one of the kids on the team (though I like them well enough), but Banshee, who takes up the role of headmaster at Xavier’s School for Gifted Youngsters. Lobdell has a great handle on the many different aspects of the character, portraying him on the one hand as a sort of father figure to Generation X, and on the other as a man unsure of his abilities as a mentor and role model. 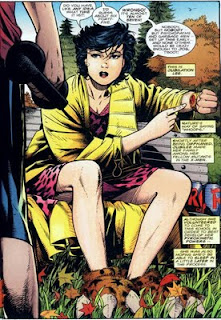 In terms of production value, Generation X Classic is by far the nicest presentation I’ve ever seen for this material. The paper stock is less glossy than the old Origin of Generation X trade, and as a result the colors are softer, warmer, and more true to the look of the original issues. Marvel seems almost to have tailored the book to emphasize how truly amazing Chris Bachalo’s artwork is in Generation X; whereas the “Phalanx Covenant” art is certainly better than average for its time, Bachalo’s attention to facial details (I can’t remember a time, before or since, when Jubilee has appeared so emotive) and his innovative panel layouts clearly place him several years ahead of that time.

There are some great extra features at the end of the book too, including the Generation X Ashcan Edition, a preview comic for the series featuring character sketches and black-and-white pencils for a number of scenes from the first issue. Also included are a series of character timelines that were published as fold-out mini-posters in the original “Phalanx Covenant” issues, and while they’re not reprinted at full size, it’s still great to see them here.

Overall, Generation X is both one of the best comics that Marvel published in the 1990s and a great addition to Marvel’s “Classic” line. This volume ends at the perfect point, since the series was taken over by the “Age of Apocalypse” crossover for several months after the fourth issue. With any luck, Marvel will publish a second volume collecting more of the main series from the fifth issue onwards – heck, I’ll probably be the first in line to buy it if they do!