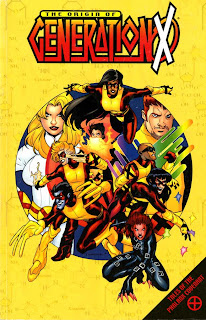 As I mentioned in my review of Generation X Classic, Vol. 1, “The Phalanx Covenant” was a mid-’90s X-Men crossover consisting of three smaller parts. The first, and the most important in terms of overall Marvel continuity, was “Generation Next,” which followed Banshee and Emma Frost in their attempt to free the future members of Generation X from the clutches of the techno-organic alien race known as the Phalanx.

This story was recently collected in the first volume of Generation X Classic, but left out were the other two parts of the crossover. The entire crossover (along with the first issue of Generation X) has only ever been collected once, in the trade paperback X-Men: The Origin of Generation X. The book is subtitled “Tales of the Phalanx Covenant,” and to be honest that’s probably what the trade should have been officially called, since half of it has absolutely nothing to do with Generation X at all. Inaccurate branding aside, though, it’s a pretty good crossover for the most part, and the trade is worth seeking out if you’re interested in getting the entire story.

“Generation Next” is certainly the best of the three parts (and I’ll avoid talking too much about it here, since I discussed it at length in my last review), but “Life Signs,” featuring X-Factor, X-Force, and Excalibur, is a solid read as well. Considering there are three mutant teams involved, the writers do a pretty good job of giving each character a purpose and at least a little bit of face time. For the most part, though, the story focuses on Cannonball, Wolfsbane, Forge, and the mysterious Douglock as they take the fight to the Phalanx’s home base.

Douglock is a particularly interesting character – having first appeared just a few months earlier (in the pages of Excalibur), he’s a sort of combined reincarnation of Doug Ramsey and Warlock, two X-Men characters who had been killed off some years earlier. Through him we learn a great deal about the nature of the Phalanx: as it turns out, they were artificially engineered from DNA harvested from Warlock’s ashes after he died. Techno-organic in nature himself, Douglock imbues the Phalanx with a level of humanity not seen in the other parts of the crossover.

“Final Sanction,” the third and final part of “The Phalanx Covenant,” is far less subtle and much more action-oriented than the others. In fact, “dumb” might not be an inaccurate way to describe it. Reading it, I felt like I was watching a Michael Bay movie; there’s simply so much going on in each panel that I was left constantly wondering about what exactly I was looking at. I usually enjoy Adam Kubert’s artwork, but here I just felt as though he was trying to do too much in too little space.

The story in “Final Sanction” is the most straightforward of any part of the crossover. It mostly revolves around Wolverine, Cable, Cyclops, and Jean Grey blowing things up because, for some reason I never happened to catch, doing so is integral to saving the rest of the X-Men (who have been captured by the Phalanx). None of it makes much sense, and although it’s only two issues long it definitely begins to drag towards the end. However, I must admit to being intrigued by the intense hostility between Wolverine and Cable in these issues, which is something I don’t remember ever seeing in more recent comics featuring the two characters. The origins of their feud aren’t explained here, but I would be interested to read more about it at some point.

The trade ends with the first issue of Generation X which, as I’ve mentioned before, is one of my favorite comic book series of the 1990s; it’s definitely worth reading in some format, whether it’s in this book or in Generation X Classic. Which trade is “better” is really just a matter of preference: are you more interested in the characters from Generation X, or in reading “The Phalanx Covenant” in its entirety? If it’s the former, then you’re better off with Generation X Classic – which, on top of including an additional issue of Uncanny X-Men, also has better paper quality and better presentation overall.

The Origin of Generation X, on the other hand, in the style of most Marvel trades from the early 2000s, uses an inferior dot-based coloring method and relegates issue covers to the back of the book. Since it’s the only trade to ever collect “Life Signs,” though, it’s not a bad purchase if you can find it at a good discount. It’s entirely possible that Marvel will eventually release a new collection of “The Phalanx Covenant,” perhaps in a nice oversized hardcover (as it has for other early-‘90s crossovers like X-Tinction Agenda and X-Cutioner’s Song), but for now, The Origin of Generation X is a suitable enough way to read it. It’s just not, as the title might have you believe, the best way of reading up on Generation X.